Nick Castellanos Will Never Be This Cheap Again

It’s no secret that I have a fantasy baseball man-crush on Nick Castellanos. Ever since being drafted 44th overall in the 2010 MLB draft out of Archbishop McCarthy High School and not long after having a 70-grade hit tool slapped on his name, I’ve been enamored with Castellanos. It wasn’t just the bat-to-ball skills that had me drooling; scouts also thought he deserved a 60 future grade on his power.

Rapid Rise Through The Minor Leagues

Castellanos hit the ground running as a prospect, starting as a 19-year-old in Class-A. In his first pro season, Castellanos sprayed line drives all over the field to the tune of a .312/.367/.436 slash line. That performance earned him a promotion to High-A the following season, where he continued to feast on pitching while only striking out 17% of the time and walking at a 9% clip. This earned him a mid-season promotion to Double-A where the walk rate dropped (4%) and strikeout rate increased (22%), but he was among the youngest players in the league at just 20. While many teams would have held Castellanos at Double-A for another half-season, the Tigers aggressively pushed his special bat to Triple-A. There, his walk rate bounced back to 9% while he whittled the strikeout rate back down to 17%.

This is because what most of you remember about Nick Castellanos are his struggles at the major league level in his age-22 and 23 seasons, followed by his mini-breakout in 2016 during his age-24 season and his perceived stall-out last year. You might have dumped Castellanos after his disappointing first half in 2017, but after June 1st he crushed the baseball to the tune of a .303/.339/.557 line. The biggest change was a sharp increase in flyballs, up to 40%. Castellanos accompanied it with a 17% HR/FB rate, allowing for an impressive .254 ISO and .373 wOBA.

My favorite comparison to Nick Castellanos over the course of his career has been Freddie Freeman. You may also remember when fantasy owners began getting burnt out on waiting for Freeman’s power to emerge. The Braves’ first baseman burst onto the scene as a 22-year old as well and put up some admirable seasons in his first two years, posting wOBAs of .348 and .342. Soon after, Freeman was able to take his walk rate up from ~8% to ~11.5% with a small increase in power, but there was still no sign of the home run power scouts had projected for the 6’5 220-pound lefty. Freeman was also posting strike out rates in the 20-22% range though he had consistently been at or below 16% in his quick run through the minor leagues. During this time Freeman’s home run totals were seemingly stuck at 23 as well. His ISO was forever frozen in the .185-.195 range.

Then, something magical happened in 2016… and it wasn’t just the new baseballs. Freddie Freeman began hitting more home runs, as his HR/FB ratio went from 15% to nearly 20% (albeit with a slight trade-off in strikeouts, as he struck out a quarter of the time). In 2017, Freeman continued his assault on baseballs by posting his second straight .400+ wOBA season; he also pushed his strikeout rate to an all-time low (18.7%) and maintained his 12%+ walk rate. The transformation was complete and Freddie Freeman is now an elite real-life and fantasy slugger. What changed, why have we spent so much time talking about Freeman in a Nick Castellanos article?

On the whole,  Castellanos’ 2017 looks a whole lot like Freddie Freeman’s 2015. But strip out Nick’s soul-crushing first half, and his post-All-Star Break performance resembles Freeman’s 2017–a season where the power-hitting version of Freeman emerged. The big change, of course, is that launch angle, jumping for both batters. While it’s the distribution and combinations of both exit velocity and launch angle that matter, the averages on both give you a good comparison point between the two players.

Below, you can see how the distribution of Castellanos’ launch angles changed in the second half of the season. In fact, of the three hitters we’re talking about, Castellanos is hitting the highest percentage of his batted balls in what I’ll call the “homer zones,” where said player has enough exit velocity to carry the batted ball out of the park. Though he did make trade-offs with some unfavorable xwOBA outcomes in the 40°+ range, those damage zones were lit up much like Freddie Freeman. A point of difference between Freeman and Castellanos is Freeman has an extra mph on his exit velocity on balls in the “homer zones” and he also hits these balls harder to the opposite field (95 vs. 91 mph). 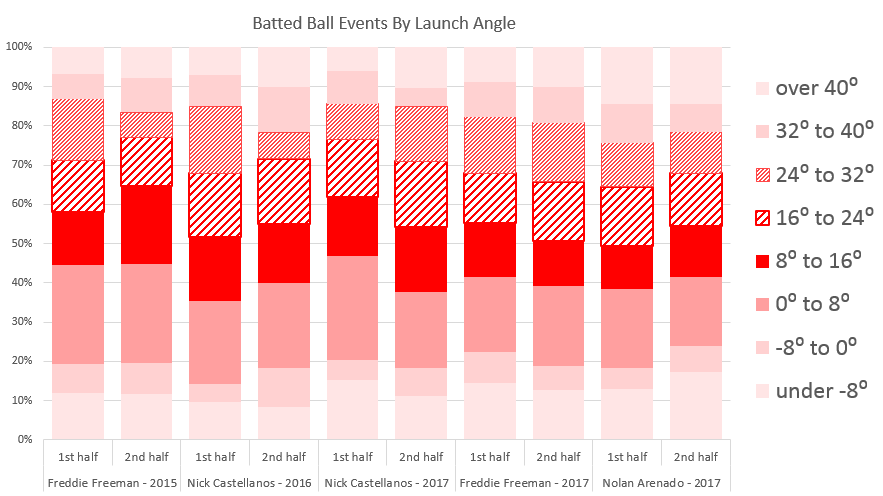 Hitting The Ball Harder Than Arenado Is Hard To Do

Although he regressed on his overall FB% last season due to the abysmal first half, Castellanos increased his HR/FB ratio for the fourth straight year – including doubling the rate of his opposite field home runs. Notably, his home park appears to suppress a great deal of his home runs and perhaps some of his fantasy value. Castellanos actually hits the ball harder than Nolan Arenado both on average and when considering just balls struck within the launch angles likely to produce home runs. Consistency seems to be the one thing holding Castellanos back from stardom, but if he ever pairs his first half from 2016 with his second half from 2017 it’s going to be a monster year for him.

The Time To Buy Is Now

You want to buy Nick Castellanos now, even with a position switch to the outfield. His profile compares favorably to a guy like Marcell Ozuna, who doesn’t hit nearly as many flyballs, has a similar strikeout rate, and is likely to regress across the board in 2018. You can see how infrequently Ozuna is putting the ball into the damage zones (dark red and the striped HR zones) which correspond to the highest xwOBA outcomes. Ozuna has to rely on HR/FB ratio spikes, which entail him pulling the ball in the air a majority of the time like he did in 2017. Castellanos, on the other hand, is putting more balls into the line drive zones and the two fly ball homer zones above it. 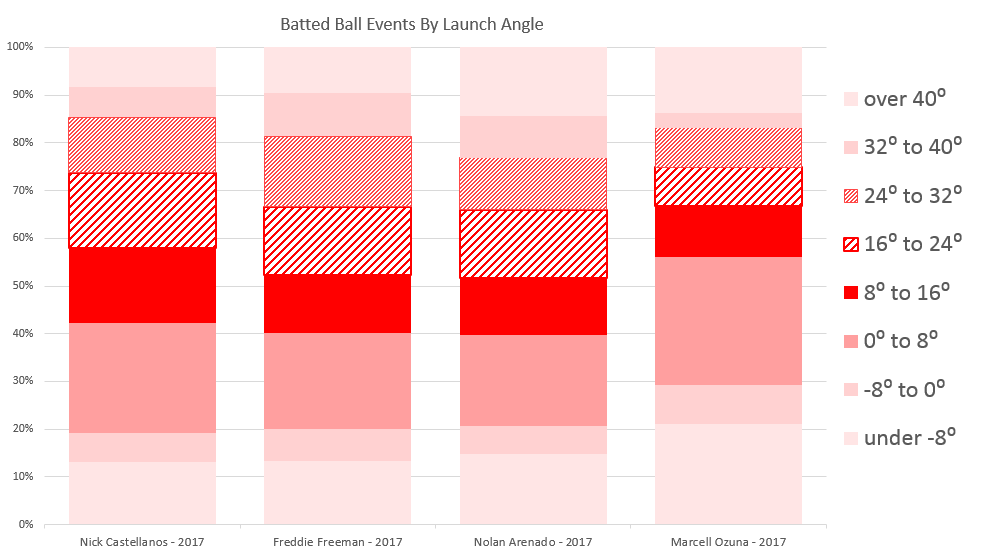 Remember the bat speed, remember the power and keep watching Castellanos improve with pitch recognition and physical maturity. The breakout may be even bigger than I expect if he’s able to reign in the strikeouts a little and put more of those hard hit balls into play in 2018. One more thing, for your back pocket in dynasty leagues: Castellanos becomes a free agent in 2020, at age-28, and will perhaps be able to finally escape the cap that Comerica places on his value.

Nick Castellanos Will Never Be This Cheap Again