Tim Beckham’s career has been a large disappointment for the Rays and his fantasy owners.  There were high expectations for him after being taken with the number one overall pick in the 2008 draft, but prior to this season–nearly ten years after the draft–he’d accrued all of 1.2 fWAR as one of the draft’s biggest busts. It may be too late for the 27-year-old to remove that title from his name, but Beckham may not be the value black-hole we all thought he was. The Rays’ shortstop has already matched set a career-best home run total and will nearly undoubtedly set new career highs in every counting stat category. While the likes of Yonder Alonso and Justin Smoak, other top prospects who have failed to meet expectations, have gotten praised for their improved play, Beckham hasn’t received the same attention. Given that he plays at a position with fewer fantasy relevant players, it’s odd that that’s the case. It’s time to give Beckham his due and take a deeper look at what he’s done this season.

The first notable thing about Beckham’s profile this season rather basic: his playing time. Beckham has 234 plate appearances this season, already the most of his career for a single season at the big league level. Beckham has earned that playing time by posting respectable numbers against right-handed pitching for the first time in his career. His OPS against righties has risen from .683 spanning from 2014-2016 to .776 this season. While no one will confuse him with Carlos Correa, this improvement has bought him regular at bats.

With that playing time, Beckham has displayed a new approach at the plate, as he has become more aggressive. This is especially true when it comes to attacking pitches inside the zone. In addition, Beckham has been able to bring his in-zone contact up to up to 81%, seven percent higher than last season. Swinging strike rate and strikeout rate remain a problem for Beckham at 16% and 33% respectively, but the increase in in-zone contact has allowed him to become more efficient with the contact he has made. In other words, the quantity of his contact has not moved much at all, but the quality of his contact has greatly improved.

This is backed up by his batted ball profile. Beckham’s hard contact rate is 10% higher than his previous career best, and at 42.6% he owns the highest hard hit rate among all qualified shortstops. His barrel rate agrees with this assessment, as it sits at 6.5% this season as compared to just 3.7% last year. However, even with all that said, Beckham could struggle to be a true power producer due to a lagging 27.9% fly ball rate. To this point, Beckham has relied on a 23.1% HR/FB to post his ten home runs, very likely an unsustainable rate. That makes it unwise to prorate his current home run mark over the rest of the season, but the significant change in approach and batted ball data make it worth considering Beckham.

It’s easy to write off Beckham given that he has bounced around all levels of professional baseball for ten seasons. However, his early season numbers have matched up well to other options at shortstop as he ranks ninth in runs scored, third in home runs, third in RBI, 10th in batting average, and he also has contributed a surprising four stolen bases. We may have seen the best of what Tim Beckham has to offer, but that has made him fantasy relevant with little to no fanfare.

Dynasty’s Child Episode 73: The Gang Gets A New Member 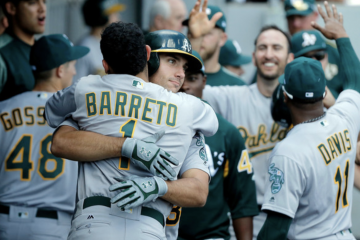 Up the Middle: Hak Ju Lee