In the age of launch angles, lowered hands, and exit velocity, sometimes all it takes is some muscle to emerge offensively. Whit Merrifield started his MLB career via the 2010 Amateur Draft. He was taken in the 9th round with very little fanfare. You hear about ‘level-per-year’ players, but Whit ended up spending two or three years at each level. If he was on any fantasy radars to begin with, he certainly fell off during those developmental years. But the 2B, OF, and/or utility player has shown some of that aforementioned muscle, and it’s time he gets closer examination as a legit fantasy asset.

Merrifield’s main path to fantasy relevance this season was supposed to be a combination of playing time and some steals, but he’s shown himself to be more than a fantasy one-trick pony thus far. While he has displayed the solid speed with seven steals in 53 games, the most impressive part of the 28-year-old’s game is the six home runs that have already tripled his 2016 output in over 100 less plate appearances. Boasting a .288/.332/.449 line in his sophomore season, the Royal has produced across the board at a middle infield spot, something that we’ve never seen before by the former non-prospect.

In the minor leagues, Whit built his game around speed. He swiped 20 or more bases four times in six minor league seasons. Those theft attempts culminated in 2016 with a career high of 32 SBs at Triple-A. Merrifield ended his MiLB career with a solid enough 73% SB success rate. Whit has a speed score of 6.4 this year, on the heels of 5.9 last season. He also posted speed scores with a plus rating nearly every year of his MiLB career. Check out how that stacks up to historic speed scores going back to 1901, courtesy of FanGraphs: 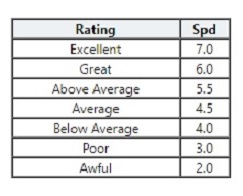 Diving into PitchFX, Whit’s plate discipline appears to have improved this season, which could explain some of his improved offensive output. He is swinging at more pitches in the zone this year, 67.2% compared to a Z-swing of 59.7% in 2016. Whit is also offering at fewer pitches outside the zone (35.7% vs 34.8) compared to last year. That selectivity led to an increase with out pitches out of the zone (74.6% up from 65.9%). His 13.1% K rate is also extremely low, and will place him securely in the top-20 once he obtains the requisite number of PAs to qualify. Sadly, he is not much of a walker at this point in his career, but he posses the batting eye and bat control to improve moving forward.

Without mincing words, Whit is beasting off LH in his career to the tune of a .357/.413/.522 slash. Especially for a 2B eligible player. This year that includes a robust wRC+ 154 and 195 ISO. The slash vs righties is not quite as impressive but still solid for middle infielder at .267/.305/.435. This incremental, yet steady improvement represents success over his 2016 line and could earn him more playing time.

Although Merrifield’s quality of contact doesn’t seem to have changed all that much, he’s hitting far more fly balls and has seen more power as a result. And despite a lack of hard contact, his quantity of contact (once again, take a look at the low strikeout rate and high contact rate) allow for a very solid average that seems sustainable, especially when considering his unspectacular .308 BABIP for a speedster.

Where is the chase, and how do I cut to it:

Trying to hit for power can be a dangerous game when your legs are your meal ticket. That being said, I love it when a player admits to a change in approach, and even proclaims he has more power in the tank that previously thought. Merrifield is trying to shake the dreaded utility player label right now. Such a label can follow a player for many years before fantasy owners buy-into skill growth. Let’s go straight to the horse’s mouth and hear Whit’s own words about his power surge, courtesy of Kansascity.com:

“If I can put together a good stretch of taking advantage of mistakes, I don’t think there’s any doubt I could hit 15 to 20 homers,” Whit continued with: “I got enough juice,” he said, smiling. “People might not think so, but I got some pop in my bat.”

The article also recounts how Merrifield added 20lbs of muscle over the past two seasons. He did this by radically changing his diet and chowing down on seven meals a day. Combining protein with mad workouts seems to have paid off. Whit is on pace for a 15/15 season, which comps well to the current iteration of Jason Kipnis. Merrifield comes with the added bonus of having OF eligibility in many formats. At approximately 25% ownership in ESPN leagues, the acquisition cost could be minimal, and while the power may not keep up like Whit says it will, the speed could tick up as he refines his technique at the MLB level. This leads be to believe this under appreciated asset has speed upside to boot. Buy.

It's Time to Pay Attention to Tim Beckham

Taking a Look at Breakouts in Milwaukee