This week, we will be taking an in-depth look at a rookie pitcher who turned some heads in his organization, earning him a showcase as a starter.  This happened partially out of necessity as his major league club dealt with both injuries and mediocre performance from their pitchers.  This player made only a single start across 4 minor league seasons before he was awarded with a handful of rotation turns down the stretch.  Many have pegged him as a bullpen piece, but that may be his new floor.  The one-time late round pick out of college is now poised to enter the spring as a legitimate rotation contender after his stuff has seemingly taken a step forward.  This player is one of my MLB sleeper picks for 2017.

After 254.1 minor league innings across five seasons, Andrew Triggs made his MLB debut in 2016 for the Athletics.  During his MiLB career, he made just one start, which came in 2014 while in the Royals organization.  He uses a low 3/4 arm slot and a delivery which he repeats very well.  This adds an element of deception to each of his 4 offerings.  Triggs pitch mix consists of a two-seamer, a cutter, a wipeout slider, and a quickly improving changeup.  His slider and cutter both approach a SwStr% of 16%.  His arm action leads to incredible movement on all of his pitches.

Triggs broke into the majors in his customary MiLB role of a relief pitcher.  Unfortunately, he initially struggled to replicate his minor league success.  In 4+ seasons, his minor league ERA of 2.09 and 1.04 WHIP  flew under the radar.  After throwing a clean inning during his MLB debut on April 25th, he suffered through an ERA of 7.62 and 1.62 WHIP in May.  Over the course of 2016, he struggled in a relief role which lead to eight callups from the minors.  Never have I seen a player shuffle between levels so frequently.  Luckily, his perseverance paid off, and Triggs was given the chance to start June 18th against the Angles.  His performance was decent for a spot start, but his final line was nothing to write home about: 3IP, 3H, 1R, 1K 0BB.  Triggs received four more starts at the end of the season, and ended his 2016 with a 2.81 ERA over 25.2 innings as a starter, with an excellent slash line of .190/.206/.309.

Batters struggled to make contact against Triggs this year, as he yielded a low 76.3% contact rate.  This placed him in the same neighborhood as David Price, Madison Bumgarner, and Justin Verlander.  His average Game Score of 56.3 put him right in between Danny Duffy and JA Happ.  He also limited hard contact, allowing a mix of 19.2% soft, 53.9% medium, and 26.9% hard contact.  The latter figure placing him in great company as well, in Stephen Strasberg, Jon Lester, and Corey Kluber territory.  Strong rates of  a 4.23 K/BB, 2.08 BB/9, and 0.80 HR/9 also match the top 20 rates of qualified pitchers.  Triggs xFIP- of 77 would trail only Kershaw, Fernandez and Syndergaard, and his SIERA of 3.20 would’ve been 6th best in the league. All of this only happened over five starts, so don’t expect this performance to improve, but he was so successful that it’s worth keeping tabs on the young pitcher.

While his run prevention skills were excellent in those five starts, Triggs also showed strengths elsewhere on the mound. He had a very solid strikeout rate of 8.79% (between starting and relieving) while also a strong 50.9% groundball rate. The 27-year-old is has also been great at preventing home runs, with his 2016 HR/9 of 0.80–a very solid mark–being the worst of his career, exceeding his previous high of 0.60.  Included in those figures are the whopping zero homers he allowed during the entire 2015 season.  Granted, that came in 61 IP as a reliever, but it is still an impressive feat.

Triggs also received endorsements from team management and teammates alike.  Bob Melvin publicly announced that Triggs would be taking a turn every 5th day down the stretch so he could be evaluated for 2017.  Sadly, he shortly thereafter left his September 2nd start after a single inning, and was lost for the season with a back injury. Still, there is optimism around the organization, with Billy Beane saying that Triggs “was a guy who had been a middle reliever his whole career. And out of pure necessity we started him. And we think we might have found something long term there. Sometimes out of crisis comes opportunity.”  Catcher Stephen Vogt has also praised Triggs for his intelligence and competitiveness.

If 2016 is any indication of his future, Triggs is armed with an above average K% and BB%.  Aside from all the numbers above, he passes the eye test for me every time I watch him pitch.  His delivery is compact, simple, and leaves him in a solid fielding position in spite of some cross fire action.  MLB.com lists Triggs as the A’s 5th starter on their depth charts, so he should have an opportunity to start come Spring.  The A’s need reliable pitching, and he could be the latest player to convert from reliever to starter at the MLB level.  If the conversion holds and he wins a starting job, I think he can be successful in a spacious park, with an improving defense behind him. Maybe Triggs won’t come close to his 2017 numbers, but considering his current cost, there’s no reason not to take an extended look at him this offseason. 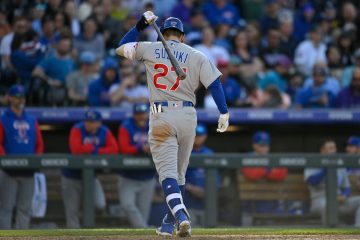