It’s not uncommon for young hitters to improve their plate discipline as they get accustomed to MLB pitching, but Odubel Herrera hasn’t just improved in his second season, he’s developed one of the best eyes in the league. Leading off for one of the worst offenses in baseball, much wasn’t expected. Now, with one of the highest walk rates in the league through the first four weeks of the season, dynasty leaguers need to know if Herrera is for real, and if he’s a player worth targeting.

Herrera debuted in 2015 for the Phillies, skipping Triple-A altogether. Despite striking out nearly one-quarter of the time as a 23-year-old, he posted a respectable .297/.344/.418 in his first full season, mainly batting atop Philadelphia’s moribund offense.  His performance was driven largely by his speed: his league-leading BABIP was driven by a top-15 infield-hit rate. The BABIP may not be repeatable, but Herrera’s track record does show an ability to maintain an above-average BABIP during his time in the minors.

2016 has been quite a different story so far for Herrera. Similar to his past track record, Herrera could have been expected to raise his walk rate, as he had in every level he’s repeated. But what he’s done in 2016 thus far, no one could have seen coming. After four weeks, Herrera is currently tied atop of the leaderboard with Paul Goldschmidt, walking over 22 percent of his at-bats. And he’s lowered his strikeout rate by a quarter!

At first glance, the biggest change has been what pitches Herrera has swung at – or not swung at. So far in 2016, he has offered at significantly fewer pitches outside the zone, and he’s made more contact than he did a year ago.  He’s seen more pitches outside of the zone this season, too, and that fact has made the change in approach even more important. He’s seen one of the lower rates of first-pitch strikes of any hitter in baseball thus far, and his outburst of selectivity has taken full advantage.

Getting ahead in counts early has in turn changed the pitch sequencing Herrera has seen. Through the first month, he has unsurprisingly been the beneficiary of a considerable rise in fastballs. More fastballs means less breaking balls, and he has improved in the early going at laying off the bendy stuff he has seen. That’s good, because slower pitches outside the zone were a big problem for him last season.

Herrera’s batted ball profile has also changed in a major way this season. After spreading out his batted balls evenly last year, he’s traded some of his sneaky pull-side power for more up-the-middle contact. It hasn’t been great contact, though (remember the increased contact rate against non-strikes?). He’s traded in ground balls for fly balls, with an explosion of pop-ups low-lighting the evolution and driving a decreased exit velocity.

Funny thing, though: despite the changes, Herrera has still managed to carry over the power he showed in his 2015 debut. He only hit 13 home runs in over 2,300 minor league at-bats, yet he knocked out 8 long balls last season as a rookie. This year, he’s already hit three in the first month-plus of the season.  That’s a positive sign with the drop in pulled hits, one that shows Herrera isn’t selling out to hit more dingers. With the rise in OBP he’s also been able to flash his wheels a bit more, stealing four bases in six attempts.

If you take a look at Herrera’s track record, an improved plate presence isn’t so much of a surprise. But, the leap Herrera has made so far in 2016 has been much greater than even the most positive of predictions. As pitchers start to force the issue more with Herrera early in counts his walk rate is most likely to decline, but the improvement looks to be at least partially supported by the underlying skill. Just turning 24 years old before the season, there’s a good chance Herrera is a mainstay atop the Phillies lineup for years to come, and while he’ll no doubt be a costly inquire he may just be worth the full retail price as an OF3 who contributes in four categories. 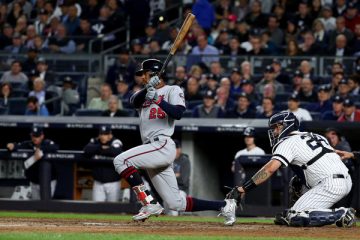