Two of the best pitchers in baseball square off in this week’s Smackdown. Lester has had a tremendous bounce-back season to regain his former slot in the pantheon of elite pitchers. Bumgarner kept right on doing what he has done ever since he hit the big leagues — mow down hitters with ruthless efficiency. This Smackdown will determine which one of them had the better season and which one is the better pitcher to own for the future.

Both contestants are southpaws pitching a few miles apart in the Bay Area. Both are big and almost the same height and weight (6’5″, 235 for Bumgarner, 6’4″, 240 for Lester), but despite their size they deliver only average velocity. Bumgarner is 5.5 years younger than Lester. Both have been true workhorses ever since coming to the major leagues, averaging more than 200 innings per year. Bumgarner has yet to have a disappointing year in his stellar career. Lester on the other hand stumbled for a couple years. Lester was excellent his first 4 full seasons from 2008 through 2011, but then he took a big step backwards in 2012 before partially recovering last year in 2013. This year he has been as good as ever.

First let’s take a look at the traditional 5×5 fantasy stat categories to see if we can declare an early leader in the contest. Bumgarner has the edge in Wins, but not by much even though the Giants are a much better team than the Red Sox, whom Lester played for most of the season. Lester has a big edge in ERA. The combatants tied in terms of Strikeouts, WHIP and innings. Clearly this section doesn’t give either pitcher a leg up over the other. The battle is still way too close to call.

Both Lester and Bumgarner are among the top 10 starting pitchers in baseball no matter what scoring system your league uses. The only pitcher who is unquestionably superior to these two is the alien superhero Clayton Kershaw. Lester and Bumgarner belong in the first tier of Earthlings along with Johnny Cueto, King Felix Hernandez, Corey Kluber, Chris Sale and Adam Wainwright. Again we have another section that is extremely tight and we are no closer to determining the winner of the Smackdown.

Neither pitcher has been lucky in terms of BABIP. They have both been slightly lucky in terms of runners left on base but it is not enough to make any adjustments to expectations because it is likely due to the next stat, DER. Both pitchers have the good fortune of playing in front of excellent defensive squads. Bumgarner’s Giants have the 5th-best defense in baseball, and that goes a long way toward helping him get a lot of extra outs. Lester now plays for the Athletics, who are the best defenders in the majors, but he played the first half of the season for the 19th-ranked Red Sox. Both pitchers play their home games in ballparks that are friendly to pitchers, although again Lester played much of the season at hitter-friendly Fenway. Neither pitcher was affected too much positively or negatively by the ballparks they pitched in once you include both home and away starts. Lester had the advantage of playing for a high scoring Athletics team this year but that may not be true next year because he is a free agent now. Bumgarner’s Giants are a middle-of-the-pack offense. Playing for a good hitting team makes it a lot easier to earn Wins. Neither pitcher faced a disproportionate number of good or bad hitters in terms of OPS. All things considered you cannot credit their success to luck. Their stellar statistics were earned legitimately.

Here we can see that despite having a half-run edge in ERA, Lester’s composite stats are the same as Bumgarner’s. We know that FIP and SIERA are better measures of a pitcher’s true performance than ERA is. This means we should expect Lester’s ERA next season to more closely resemble his composite stats in the 3.00 range rather than the 2.46 ERA he put up this year. That 3.00 ERA is still very good though. In fact we should expect Bumgarner to be in that range as well. This section is a tie just like the previous sections. Sooner or later one of these guys will pull out to a lead over the other.

These stats boil pitching down to the nitty-gritty truth. Excluding OPS Allowed, these are the stats that pitchers have complete control over regardless of all other extraneous factors such as team defense and ballpark. Pitchers who excel at these core components are nearly guaranteed to yield good ERAs over the long haul. Pitchers who fare poorly in these metrics might be successful for brief stretches but will ultimately fail in the end (probably when your team is in the playoffs of course). Lester and Bumgarner both have excellent strikeout rates and walk rates. Bumgarner’s walk rate is a little better though, and helps him pull out to a very slight lead in the critically important K%-BB%. Both Lester and Bumgarner are much better than league average in all of these key pitching metrics. There are no red flags here to warn us of any imminent decline or regression to the mean. These numbers indicate that both Bumgarner and Lester will continue to perform at an elite level in the future, if healthy.

Our contestants both have average velocity. Since they are lefties it tends to play up a bit. They won’t blow hitters away but they have enough speed differential to upset hitters’ timing on the offspeed offerings below. Lester has gradually lost a couple miles from his peak velocity of 93.7 mph back in 2009. Bumgarner on the other hand has picked up nearly a mile per hour from his previous campaigns. That is a nice sign of good health and a young, limber arm.

Both pitchers throw a lot of hard breaking balls. Lester’s is a cutter (the pitch that has changed baseball, but that is another story), while Bumgarner’s is a hard slider that is thrown at the same speed as Lester’s cutter. Perhaps the main reason why Lester was able to get back to his glory days prior to 2012, he has cut way back on his changeup and gone back to throwing more cutters like he used to do. Both pitchers have excellent command and control of a 4-pitch arsenal. They get hitters out with sharp movement, pinpoint control and hard-to-detect speed changes. Both are experienced, clever masters of the art of pitching. This type of pitcher generally has more staying power than a fireballer and on average will have a longer career as a fantasy-worthy starting pitcher.

And the Winner is…

Once again we have a very close battle. Statistically their 2014 seasons were a tie. Digging a little bit deeper we must look at not only what happened this year but what is likely to happen next year and beyond. Bumgarner is younger and has less mileage on his arm. All pitchers will get injured sooner or later, but all else being equal we should invest in the younger, fresher arm right? Bumgarner is under Giants control through 2019, meaning he is likely to stay in San Francisco and continue benefiting from playing in front of a strong defense in a good pitcher’s park for a winning team. All of those things are good for his fantasy value. Lester on the other hand is a free agent, which means it is possible he will end up playing for a poor defensive team, a low-scoring team or in a hitter-friendly ballpark depending on where he signs this Winter. That makes him somewhat of an unknown fantasy commodity moving forward. Lester’s history also makes him a bit of a question mark. Could he revert to the poor form he displayed in 2012 and 2013? Once you factor all these issues into the equation the winner of the Smackdown comes into focus: Madison Bumgarner wins!

Both pitchers are elite fantasy options moving forward, but Bumgarner is the safer bet. He is also younger (a key concern in dynasty leagues) and is more likely to continue playing in a pitcher-friendly environment for the next few seasons. Both Lester and Bumgarner are stalwart foundations for your fantasy rotation. If you have them, keep them. If you don’t have them, trade for them. If you must trade one of them, trade Lester. They both have tons of trade value so you can pretty much name your price if you decide to make one available on the trade market.

What is your opinion? Do you agree that Bumgarner beats Lester? Why or why not? Who should be matched up in the next smackdown? Let me know in the comments below.

Here are some previous recent Smackdowns in case you missed them:

Young Ace Smackdown: Danny Duffy vs Jake Arrieta be sure to read those too.

Nick Doran writes all kinds of cool stuff about the game’s ultimate flamethrowers at Blazing Fastball. He also writes at Fake Teams. Be sure to follow him on Twitter @BlazingFastba11. 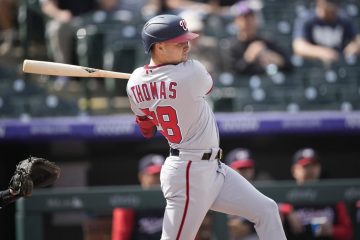