Earlier in the season I took a look at some notable fantasy prospects of the California League, and with the regular season schedule out here in the Southland winding to a close this week I figured it’d be a valuable time to check back in on a couple more names of note. Three of the more interesting fantasy prospects still in the league were on display when I took in the High Desert-Lancaster series last week, but before we get into their profiles I’d like to take a moment to add my standard disclaimer for pieces in this series: you should NEVER SCOUT MINOR LEAGUE STAT LINES. They help for context, sure, and while they do matter to the degree that they influence how other managers in your league (and, it’s okay to admit it, you) view prospects, minor league statistics shouldn’t ever be the bottom line tool you use for evaluation in dynasty leagues.

This is perhaps more true of California League stats than any other league. Among the High-A ranks this circuit’s .764 league-average OPS is nigh on 60 points higher than the Carolina League (.706) and almost 70 clear of the pitcher’s paradise that is the Florida State League (.696). The outlying nature of the league adds another vast layer of complexity when trying to analyze player performance from afar, and the High-A level is already tough enough as is. It doesn’t mean that every breakout performance in the league is a mirage, but it does mean that more often than not it’s a good idea to avoid making rash decisions about acquiring or selling prospects in your dynasty league when they’re mixed up with the arid desert air of the southwest. So consider what follows a cautionary tale, but one filled with hope and optimism for our nation’s fantasy baseball future.

Yes, he’s one of those Guerreros – Vladimir’s nephew, to be exact. And good lord is it fun to watch him play, because the body, swing, approach, and mannerisms – right down to wearing no batting gloves and running like a gimpy T-Rex – are mirror images of his uncle. The slightly above-average OPS+ is a bit misleading, as stats go. His home park of High Desert is one of the most extreme in the minors and he’s actually been a slightly below­-average hitter on his own team. That doesn’t really matter though, because he’s managed to hold his own in a league where the median player is three years his senior. While he shows at least some degree of restraint in the box he is still an exceedingly aggressive hitter, and as the last name might suggest he relies on preternatural hand-eye coordination to barrel pitches he has no business reaching. I saw him look absolutely overmatched against mediocre breaking stuff (similar to the video above) and then in the same at-bat launch a waste pitch over off the scoreboard. That’s Guerrero in a nutshell, he’s the epitome of an all-or-nothing, boom-or-bust prospect. Still, the raw tools for a boom are there in spades. He’s incredibly loose and rhythmic with his swing, and while he’s already strong there’s plenty of projection and room left to grow into his body, which could add another grade to his power potential.

This may actually be a case where Cal League inflation make just artificially deflate Guerrero’s value, as his on-the-surface stats are not particularly impressive given the league context. And if his owner in your dynasty league is unfamiliar with just how young Guerrero was for the league there may be a brief window where he could be had on the cheap – at least until the off-season lists start to trickle out and Guerrero’s name is consistently among the first few in the Seattle organization. He’s a lottery ticket for the deepest of leagues at this point, but he’ll be a fun one to have in your pocket if you have the space to stash him, and that’s what deep dynasty leagues are all about, right?

Henry may be the living archetype of the Cal League prospect: a guy with a bunch of raw power and a decent approach who’d hit pretty well in the low minors and is absolutely destroying everything in his path now that he’s at High Desert. There’s a lot to overcome here, as he’s a former 18th rounder from a tiny college program and he’s breaking out in an easy-to-discount environment. But at some point 61 extra base hits are awfully difficult to overlook regardless, and the power profile is legitimately intriguing here – particularly for fantasy purposes, where his fringe-average left field defensive profile doesn’t matter one bit. At the plate he’s got nice, quiet hands and a quick, short barrel delivery. He uses his legs well to generate torque and turn on the ball, and the bat speed helps him drive inside pitches even without getting the requisite extension that minor league power hitters typically need. There’s some swing-and-miss in his game, but his 21.3% strikeout rate is not at all obscene given the power production (especially when paired with a very strong 13.6% walk rate). He keeps himself well-balanced and shows an advanced ability to put himself in favorable hitting situations, and that’s a combination that tends to lead to success. Now, it remains to be seen how what has shown as a swing geared almost exclusively to pull-side power will play at higher levels. He’s also already approaching his 24th birthday and his future home is Safeco, so expectations should be kept in check here. But he’s a guy who’s likely to remain about as under-the-radar as any power-hitting prospect in the high minors as the 2015 season gets under way, and if he continues to produce at AA in the first half it’s not at all out of the question that he’d be in line for a second-half debut next year.

Ruiz has caught national attention lately, with Keith Law naming him among his mid-season top 50 prospects. He’s another guy that’s played this season roughly three years younger than the league average, and that’s important context with him. Even if we apply a significant Cal League discount to the raw numbers he’s made some extremely impressive strides in refining his approach at the plate this season. Despite the age disadvantage and the jump in level he’s lopped almost five percent off his strikeout rate this season (19.5% to 14.8%) while adding over three percent to his walk rate (10.6% to 13.9%). A near-even strikeout-to-walk ratio is impressive regardless of context, especially so when the walk rate is as robust as Ruiz’s. The actual hit and power tools with Ruiz, on the other hand, have remained an open question for me all season. I don’t see either as a carrying tool, and on the whole Ruiz has presented throughout this season as a player who’s much more of a quality “sum of his parts” type than a potential impact fantasy guy. Nuts and bolts-wise, he’s shown some improvement at tightening up his swing as the season has progressed, but he still has a bunch of work to do to grow into the second- or third-tier fantasy third baseman he may someday become. His hands cover a lot of real estate from their starting position to his wrist cock, and he can struggle to find a consistent launch. And as is the case frequently with young hitters his mechanics get too quick when he tries to unload on a pitch, leaving his swing long and compromising a good deal of his raw power.

All of this is to say that given his age and a substantial developmental road ahead of him Ruiz fits the mold of a prospect that has significantly more real world than fantasy world value at present. I suspect this will become all the more true this winter, as his solid all-around profile and age-relative performance should yield him a bunch of just-deserved accolades from the major prospects outlets. That’ll make for a nice environment in which to look to move Ruiz in a deal for now talent if you’re trying to compete in 2015. 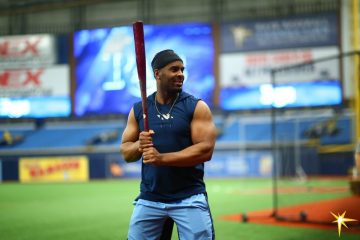 What to do about... Nick Castellanos