LATEST
GeneralUncategorizedWhat To Do About...

In this installment of the Last Minute Pickups series I am scouring the waiver wires looking for 1st basemen who can be picked up as possible useful pieces going into the 2014 season.

First base is a position where you really need to have a big-time slugger if you are going to challenge for your league championship. Obviously you are not going to find any studs that fit that description on your Free Agent list in late September. However, you might be able to snare a sneaky-good young player who could develop into a useful role player for your team, or maybe snag an overlooked veteran who could rebound enough to help your team at a corner infield or utility lineup slot. The idea here is to unearth a useful player for free. Who knows, maybe you can turn a lump of coal into a diamond with some shrewd trading if the player has a hot spring training.

Chris Carter comes from the mold that hatched Carlos Pena. Carter is a guy who will kill you in Batting Average but can provide a lot of value in the counting stats. He has great power and is very likely to give you 30+ home runs in each of the next several seasons. His Astros team is in the midst of a promising rebuilding program, so as his teammates improve around him you should see his RBI and Runs Scored totals move steadily upward to appealing levels. His value is going to depend heavily on your league’s scoring system. If you play in a standard 5×5 roto league he will be good in 3 categories (R, RBI, HR), will be a zero in stolen bases, and will kill you in AVG. If you play in a league that replaces AVG with OBP his value will be much greater because he does take his share of walks to the point that he has a league-average OBP despite his terrible AVG. If you play in a league where hitters are punished for strikeouts you should avoid him like the plague because the only number that will exceed his 200+ strikeouts per season is his weight of 244 pounds. He is still only 26, so he might have enough upside left to boost him up into fantasy starter status if he can get that batting average up to .250 or more.

James Loney in many ways is the opposite of Chris Carter. Loney is a veteran 1B who lacks power but provides good value with a high batting average. Most of us wrote him off after his terrible 2012 season that saw the Dodgers finally give up on him and ship him to the Red Sox, who were surely sorely disappointed with the horrid .230/.264/.310 slash line he provided for them. Last winter he signed with the Tampa Bay Rays and has been a pleasant surprise. His 2013 slash line of .294/.343/.417 shows a return to his career norms. While his R, HR and RBI totals won’t blow you away he does provide enough production to be a solid option at corner infield or utility player. Ideally you could platoon him and put him on the bench against left-handed starting pitching.

Justin Morneau is a former American League MVP and is only 32 years old, yet he is available on many waiver wires. Why? Well, he suffered a severe concussion that nearly ended his career. After missing extended time over multiple seasons he is finally back to full health. He has not yet regained his MVP-caliber hitting prowess and maybe he never will. But he is still younger than most people realize and the potential is still there for him to put up another monster season. The more likely result is he will provide solid value in your starting lineup against right-handed pitching and may evolve into a valuable trading chip. A lot is riding on where he plays in 2014. He is a free agent this winter. If he signs with a good team in a hitters’ park he could be a popular sleeper pick next spring.

Paul Konerko may finally have hit the wall. His age 37 season this year saw his slash line plummet all the way down to .248/.318/.357, which is a far cry from his career line of .281/.357/.491. But the key is that 2013 was the first and only bad year of his career. It is possible his skills have permanently eroded, but it is also possible that he could bounce back quite a bit in 2014. His combined OPS over the previous three seasons was over .900, so there is reason for optimism here. If you can pick up a free agent right now who can put up an .850 OPS in 2014 that would be quite a steal. I think that is certainly possible for Konerko, especially if the White Sox as a team are able to regain some competitiveness that could revitalize their veteran slugger.

Darin Ruf has all the power in the world and has shown enough contact ability that he won’t be a liability in batting average. If Ryan Howard’s injury struggles continue into 2014 then we might see Ruf get the chance at everyday playing time that he has previously lacked. Ruf’s career stats adjusted to a full season’s worth of playing time equate to 80 Runs, 35 Home Runs, 80 RBIs, 0 Stolen Bases and a .269/.358/.519 (.877 OPS) stat line. That is pretty impressive. It is worth the use of a roster spot this winter on the gamble that Ruf will be an everyday starter for the Phillies next year. 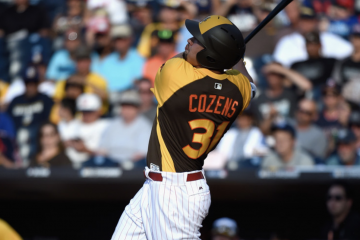