LATEST
GeneralUncategorizedWhat To Do About...

You can hate, but you love that title. The question I aim to answer in this article is whether Michael Cuddyer, he of the 927 OPS, .329 average, 18 home runs and 10 stolen bases, is worth keeping in dynasty leagues of varying sizes for 2014. I mean…what to do about him? Keep him right? It’s an easy call, really. Well what I’m supposing to you is that… what if it isn’t?

Here are the batted ball profiles of the two players:

Now, who would you rather have? Player A’s counting stats are behind, but I’ll add the caveat that Cuddyer has a 70 plate appearance advantage on Player A. The plate discipline rates favor Cuddyer, if only slightly, but the isolated power favors Player A. To further muddle things, the batted ball profiles are virtually the same, though all things told, Player A has a slight advantage in LD%, and HR/FB, while Cuddyer has the edge in IFH% which is likely to vary more given that Cuddyer doesn’t have elite speed.

So by now it’s obvious which player you’d want for a fantasy team, though it’s not at all as obvious as to which player is actually better. You might have figured out that Player A is actually Cuddyer as well, from 2012, his first year in Colorado. So what conclusions can we draw from this? Well, it would at least appear that 2013 Cuddyer is getting lucky considering he’s largely been the same player that he was in 2012, if not slightly worse. His biggest advantages over the 2012 version of himself is the 70 extra plate appearances that have helped his counting stats, but even on a rate basis, he’s been better in the counting areas.

The best reason for why that is, at least as I can figure it, is a marked spike in BABIP. 2012 Cuddyer had a BABIP of .287, which is surprisingly low for a few reasons. First off, his career BABIP is .311. Secondly, the league BABIP in 2012 was .297. Lastly, playing in Coors, one might expect a bump in BABIP due to the spacious confines and thin air. While a regression towards either the league or his career average was expected for 2013, I think an 89 point swing was more than anyone anticipated. The other thing that 2013 Cuddyer has going for him, and it’s surely affected his BABIP is a microscopic infield fly ball percentage of 1.9%. Compare that to his career average of 10.4% and it becomes a little clearer how, despite an almost dead on impersonation of his 2012 batted ball profile, Cuddyer has more hits falling in and more counting stats racked up.

The upshot? Cuddyer probably isn’t as bad as his 2012 indicated, because he saw some bad luck despite a solid batted ball profile and a friendly home ballpark. I think his true talent lies somewhere closer to his 2011 slash line of .284/.346/.459 which is plenty enough to make him keepable in any sort of deep league, but also not good enough that he’s not worth trading. If you have outfield depth, consider moving Cuddyer to plug a hole at another position, because odds are you can get someone to overpay based on a terrific statistical season backed up by solid peripherals but mainly driven by a fluky BABIP/IFFB%.

*rejected titles included: Keeping Up With Cuddyer, Cuddyer Straits, Cuddy(er) From The Cut

All stats courtesy of FanGraphs 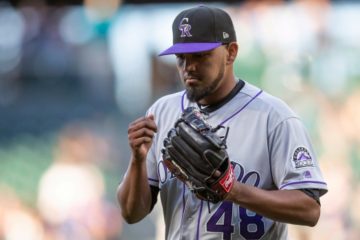 A Call To Arms: Marq-ing Out For A German