The innate ability of Billy Beane to consistently make trades that bring back quality pitching prospects in the low minor leagues is nothing short of a gift, and it has allowed the Oakland A’s to flourish despite the perpetual need to trade pitchers before they become expensive. One of the under the radar prospects is Stockton Ports right hander Raul Alcantara, who was acquired as part of the Andrew Bailey trade in December 2011.

Originally signed out of the Dominican Republic in 2009 for $500,000, Alcantara put up solid but not spectacular numbers for the DSL Red Sox in his introduction to professional baseball in 2010. Prospect prognosticators marveled at how Alcantara’s frame still had projection, but he was consistently sitting low- to mid-90s with feel for his secondary offerings.

In 2011, Alcantara was held back in extended spring training then assigned to the Rookie-level GCL Red Sox, where he dominated. Despite having his innings limited, Alcantara put up a (lucky) 0.75 ERA with a 2.26 FIP before being promoted to the Lowell Spinners of the Short Season-A New York-Penn League. Alcantara was unlucky while pitching for the Spinners, putting up a 6.23 ERA across four starts, though his 2.80 FIP indicated that, given more time, his ERA would drop. Alcantara’s 2011 season was a success, as he faced batters who were almost always older and did not implode. Most impressively, Alcantara had a combined 0.918 WHIP and 6.9 K/9 across 65.1 innings. After the season, Alcantara was dealt to the A’s with Josh Reddick and Miles Head for Andrew Bailey and Ryan Sweeney.

2012 was a disaster for Alcantara, as he struggled while pitching for the Burlington Bees of the Low-A Midwest League, putting up an ugly 5.08 ERA and a 1.529 WHIP across 102.2 innings. Even Alcantara’s 4.92 FIP indicated that Alcantara was over his head and struggling. Even scouts agreed, noting that his secondary pitches did not take much of a step forward, with the changeup looking more and more like a “show me” pitch than a consistent offering.

Alcantara took a large step forward in 2013, putting up a 2.44 ERA (and 2.63 FIP) while returning to the Midwest League (this time for the Beloit Snappers) across 77.1 innings before being promoted to the Stockton Ports of the ultra-hitter friendly High-A California League. Alcantara continued to shine, putting up a 3.76 ERA (3.64 FIP) across 79 innings. Additionally, Alcantara improved his command, walking only 1.4 batters per nine innings while striking out 7.1 per nine innings.

With his solid peripherals and resume in a league notoriously difficult on pitching, Alcantara has firmly put himself on the prospect map. Alcantara should be on the radar of anyone in a Dynasty League, and should be owned by anyone in need of pitching in a few years, or a trade chip more immediately than that. However, Alcantara lacks the ceiling of an elite starter, looking more like a solid #3 with the possibility of becoming only a #2 on a weaker team. Scouts have praised his low- to mid-90s fastball and his potential better than average slider, with his changeup looking more and more like a usable (if only average) third pitch. With his prototypical size (6’3”, 180 lbs) and consistently increasing innings count (65.1, 102.2, 156.1), Alcantara is being groomed to be an innings-eating horse in the mold of all of the pitchers the A’s have used before him.

While his command is not as good as his walks per nine would indicate, Alcantara has shown that he has the potential to use both sides of the plate and keep hitters off balance with his three pitch mix. As he does not turn 21 until December, Alcantara’s youth is another positive factor, but there is the distinct possibility that Alcantara may struggle mightily once he faces more selective hitters in the high minors.

As you complete (or begin) your early fall roster cleaning and prepare for next year, it may be a good idea to pick up a pitcher ready to take the next step into the upper echelon of pitching prospects. He may never have the buzz of Lance McCullers, Max Fried, or Kyle Krick, but a few seasons of low-3 ERAs with few walks and fewer home runs (he has averaged 0.6 for his career, ballooned by 1.1 during his struggles in 2012 and 0.9 while in the hitter-friendly California League). 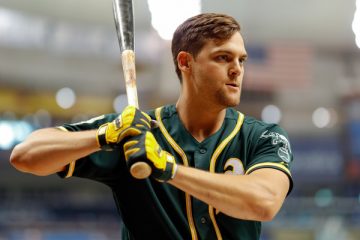 More Fun At The Hot Corner With Nolan Arenado