You already know the top of the food chain at the fantasy shortstop position. You also already know about the next wave of shortstop prospects that you should have rostered last year. If you missed the boat on both of these then you are probably too late and stuck in no man’s land at that position. So you might be looking for someone who won’t cost you a haul of picks or prospects to fill that crater-sized hole in your lineup. The analysis and insight that my fellow Gurus have already given in the rankings is more than enough for you to make a decision. I can’t give you more insight or analysis than they already have. And to be honest I don’t know nearly as much as they do. So I have decided to focus on one particular shortstop who has been overlooked in the fantasy baseball world. He is outside of the elite class that is not available in your league anyway and he is not part of the next wave of prospect shortstops who have taken most of the attention this off-season. He was even off my radar till I came across a tweet from someone who has already proven time after time that he can evaluate players who are on the cusp of breaking out to an elite level. After seeing his seal of approval. I decided to take a deep dive into Dansby Swanson of the Chicago Cubs to see what was it that made Taylor Cases (@CasesLoaded) single him out this off-season.

Do you know someone that is always full of positivity that each time you talk you wonder if you are just a miserable human being? This person spends hours of their time helping you. They don’t want any recognition for it. And even after all that help you still make mistakes that a third-grader would know, they stay positive and let you know in the most gracious way possible.

You tell yourself that no one can be this nice. So you find ways to test this person to see if it is all a facade. So you subtly find ways to antagonize them. Poke the bear. Maybe bring up how their favorite team *cough* The Padres *cough* always find ways to lose every postseason. Or you find ways to bring up clostebol or ringworm in conversations. All this in the hope that the person who has been only helpful to you will finally snap! Because in some twisted way that will make you feel better. But, they don’t break and actually say it was a funny joke. Yeah I know! That saint of a human being obviously has some serious issues!

But, seriously there is someone that is exactly like how I described as a saint. Our fearless leader Mr. Taylor Case, (@TCasesLoaded). I felt after all that he had done to help me and all the sh*t I put him through, the least I can do is defend his decree from the “Way Too Dang Early 2023 Mock Draft”. And yeah there is no doubt in my mind Taylor is the one who said use dang in that title. In that piece, the gurus went over their picks in a mock draft they did. When going over any regrets with their picks someone posed the question to Taylor if he might regret selecting Dansby Swanson when he did. Taylor simply stated. (shown below)

Now exclamation marks are the equivalent of at least 20 cuss words to Taylor. So I knew he wasn’t playing around. I decided to take a look at the draft board. Taylor (with @GregHoogkamp who was the one who questioned the pick) drafted Swanson in the 4th round before notable names like Paul Goldschmidt, Will Smith, Nolan Arenado, and Oneil Cruz (who is ranked one spot higher). So it made me curious about why Taylor was so high on him. As a Cubs fan, I felt meh about the signing. It felt more like Swanson was a consolation prize after Trea Turner, Carlos Correa, and Xander Bogaerts all signed with other teams. Fast forward a couple of weeks and we had another mock draft I participated in. Again Taylor drafted Swanson? This time in the fifth round of a 20 team league. Taylor tweeted out a draft summary of his fifth to tenth-round picks so I had to point out my observation in the hopes that he would give me a hint on why. 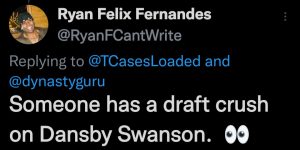 Again this is to show Taylor my support in the only way I know how. But, I wasn’t ready for what happened next.

Oh Dang! Did Taylor finally snap? Is he trolling me for the Cubs signing Swanson? Why would he? The worst I did was congratulate him and the Padres for finally getting a ring after the Tatís suspension. No. No. He isn’t like me. There must be a reason why he is so high on Swanson. And if this is the start of him breaking down. I need to help validate why Swanson should be your shortstop target this upcoming season. Again this is the least I can do for all he has done for me. So I will stand and defend with Taylor on the fictitious Dansby Mansby hill he has decided to die on.

THE CASE FOR DANSBY TO BE YOUR MANSBY

Swanson was known more for the value he brought to the real side of baseball with his gold glove defense, leadership, and intangibles. In 2021 though, he changed his approach at the plate which started to change his value in the fantasy world. He went from contact to a power-first approach with an emphasis on hitting the ball in the air. That led to a 3.2% jump in his Fly Ball percentage from 2020 to 2021. Also, in that same period, his pull percentage jumped 5.8% which is a sign of someone trying to use more power. This change led to career highs in home runs (27) and extra-base hits (35) but in turn, led to career lows in batting average and on-base percentage. This led to Swanson dropping in many dynasty rankings for prospects who had the potential of a lot better numbers in the loaded SS position.

Even with that glaring stat, there is a lot to be optimistic about and build upon. Last season was the first time in his career he found the sweet spot with his Launch Angle by entering the 15 to 20 ideal degree level with 15.7 compared 14.4, 14.7, and 14.1 the last three years. That led to an uptick in his Exit Velocity from 89.3 (in 2021) to 90.2 (+0.9). But, what caught my eye was the jump in his Hard Hit percentage from 42.7% to 46.3% (+3.6%) which landed him in the 82nd percentile amongst all MLB players. Coupled with his newfound emphasis on base stealing in which he had a career-high of 18 stolen bases. With a 55-graded speed and the base size change should help maintain or maybe even exceed that number next season.

DANSBY IS “TAI(Y)LOR” MADE FOR A BIG SEASON

At the age of 28, Swanson is heading into his prime years batting second in a new home park, in which his expected home runs were 33 if he was a Cub last season. Even though he is very high in our rankings, I feel like Swanson is easily forgotten in one of the deepest positions in fantasy. He isn’t currently mentioned in the elite SS tier and is too old to be part of the next wave of prospects that are primarily lower on our list. Swanson is probably the highest-ranked SS on our list that can be available in your league and not cost you a ridiculous haul in players or picks. His trajectory is pointed toward elite-type numbers. Don’t be surprised if he enters the conversation of elite shortstops in the game by the end of this season. And if he doesn’t remember that Taylor was the one who tweeted all of that Mansby stuff and inspired me to write this. Yes, I did learn what a scapegoat is in third grade.

I don't know why they let me write here either...