Dane Dunning fits the archetype of a “post-hype sleeper” almost exactly, with the notable exception being that he never really had much hype. The former Nationals first round pick out of Florida had all the makings of a perfectly fine back of the rotation starter after a solid junior season for one of the best teams in the country. He was third on that team in innings, behind Logan Shore and Alex Faedo, and ahead of such names as A.J. Puk, Brady Singer, and Jackson Kowar.

He was quickly traded to the White Sox where he established himself as a presumptuously safe, if unspectacular, pitching prospect before an elbow injury halted his 2018 season. He avoided Tommy John surgery that season, but a setback the following spring forced the dreaded call to Dr. James Andrews, ending his 2019 season before it started. After working his way back and showing up in the Majors during 2020, he was traded to the Rangers as part of a package for Lance Lynn. He now has the good fortune of calling a pitcher-friendly stadium home and having the full support of his front office and coaching staff.

When Dunning arrived in Texas, he had thrown just 34 innings in games that counted since June of 2018. The Rangers understandably didn’t push him all the way up to a full workload during a season where they were not competing. He started 25 games, but only threw 117.2 innings. He only eclipsed 80 pitches in a game three times, and never reached 90 pitches. In September, he was skipped in the rotation and came into two games in relief to help manage his innings. They seemed to have a roadmap in place right from the start and executed it well, as he made it through the season mostly healthy (a minor ankle injury and going through COVID protocols aren’t much of a concern for long term injuries).

It does seem as though they pushed him up to his limit, too, because there are a few indicators that his overall statline is tainted by pitching tired. His sinker and slider, his two most thrown pitches, dipped in velocity in July and August (before a September increase buoyed by those two relief appearances). There are several splits that all seem to tell a similar story. His first half/second half xFIPs: 3.56 / 4.51. His home/road xFIPs: 3.18 / 4.78. His first, second, and third times through the lineup xFIPs: 4.07, 3.46, and 5.57. Dunning didn’t have the stamina in game or throughout the season to maintain his best stuff, and it showed. With that recovery season behind him, and the Rangers pushing their chips in to be successful, manager Chris Woodward has already told Dunning that he will be leaned on more heavily, throwing deeper into games than he did last year.

Let’s not kid ourselves; we aren’t shooting for the moon here. Dunning has found a niche in being good enough. Laura Holt at Razzball said it best: “if he can improve his pitch selection and find a way to keep ahead of hitters, and then improve his pitch selection again, he could be a decent option.” He has a decent two seamer and slider, a good but under-used changeup, and he showed a promising four seamer in 2020 before abandoning it last season. He has the talent to make these improvements, and the Rangers will give him every opportunity, even if he doesn’t take a step forward. If he can recover some of his previous strikeout rate (22.3% was his lowest since he had a 22.0% mark in 33 Low-A innings in 2016), then that should help him get to ratios that match or exceed his indicators from last season. A 3.90 ERA, 1.30 WHIP, and 170 strikeouts across 160 innings is within reach, and is basically what projections have Zac Gallen and Tyler Mahle doing, two pitchers that go significantly earlier than Dunning in all drafts. He doesn’t have the ceiling that they do, but if you can secure a solid contributor with an up and coming team, I’ll take that everywhere I can.

The soon to be 29-year-old (his bday is April 3rd) is, barring anything unforeseen, the starting third baseman for the Rangers in 2021. At least, I hope so. His manager, Chris Woodward, said this at the beginning of Spring Training: “As far as Andy goes, if he hits, if he plays the position really well and hits at a high clip, he may end up being the everyday guy,” Woodward said. “But he’s got to earn that. I’m not going to hand that to him right now. He’s got to earn his way through.” A few days later, he said that Ibáñez could be the Opening starter. That’s what we like to hear.

Peak into the Past to see the Future

The Cuban Ibáñez began playing in the Cuban National Series at age 18 in 2011, where his slash line in three seasons, two as a teenager, was an impressive .283/.348/.419. He joined the Cuban national team in the 2013 World Baseball Classic, but only had one at-bat. He then defected in 2015, signing with the Rangers for $1.6 million.

Ibáñez spent his first two professional seasons at Single-A and then Double-A, making it to Triple-A for the 2018 season, and continued there for all of 2019. His Triple-A slash line, in two full seasons over 1173 Plate Appearances, was .297/.365/.474 for an .839 OPS with 39 home runs (note: this includes his short time there in 2021 as well). Those high batting averages continued from Cuba, to the lower minor league levels, to the upper levels. He did not play in the shortened 2020 season, and began the 2021 season at Triple-A again.

Last year, what a year it was

At Triple-A Ibáñez showed he deserved a call-up to the bigs, slashing .342/.411/.640 with seven homers and 48 Runs + RBI in only 129 plate appearances. Once up, Ibáñez was able to get a lot of playing time as he is a versatile defender, and the Rangers stunk. Nick Solak, his main competition at second base, was demoted for some of the season, and, as such, Ibáñez spent a majority of 2021 playing second base, some time at first, and the least amount of time at third base. A slash line of yielded a respectable .756 OPS and seven home runs in 272 plate appearances.

My favorite stat was his 13% strikeout rate, well below the league average. A .297 BABIP was much lower than his career minor league average, so over a full season of at-bats we could be looking at a .290 batting average and .350 OBP to go with 150+ Runs + RBI, 15 homers, and a handful of steals. That is solid production for a corner infield spot, but best suited to take advantage of at second base or middle infield.

Nothing brings out the best in everyone like Competition

The biggest issue with Ibáñez is the competition he faces to start at third base. Yonny Hernandez and Nick Solak are his direct competition, and while they are not the stiffest of competition, they still present a hurdle to Ibáñez starting the season as the Rangers third baseman. More than likely, it comes down to their Spring training stats, and a platoon is possible, but not how it would appear. Both Solak and Ibáñez are stronger against right-handers, and Hernandez is better against lefties, but not by much, as he has little-to-no power. Ibáñez is working with future Hall-of-Famer Adrian Beltre on improving his defense there, so that is a bonus.

If I had to make a prediction, Ibáñez starts at third, Hernandez is used as speed off the bench as a late inning replacement, and, as Solak has played some outfield, Solak fills in as necessary. Going forward, Josh Jung is the future for the Rangers at the position, but he is out the season, and one never knows what the future holds. The risk for taking Ibáñez in your drafts (554th off the board in NFBC), or acquiring him in Dynasty is next to nil (26% rostered in Fantrax), just the way I like it.

Texas was widely criticized by draft analysts for selecting Evan Carter in the second round of the 2020 draft. Most of those pundits were simply uninformed. Scouts had little chance to see him, since COVID-19 cut short his high school senior season and he didn’t play much on the showcase circuit. The Rangers managed to get a good look, however, and liked what they saw.

Carter wasted little time making his new organization look smart. He impressed at fall instructional league in 2020, where he reportedly slashed .304/.467/.446 over 75 plate appearances. That was good enough for the Rangers to send him to full-season ball as an 18-year-old, where he produced a .236/.438/.387 line with two homers and 12 steals in 146 PA for Low-A Down East. His season ended prematurely due to a stress fracture in his back.

Brandon Nimmo has been a popular comparison for Carter, and it’s not hard to see why. The two tall, left-handed hitting outfielders share not only physical traits, but also statistical similarities. They both take plenty of walks, producing on-base percentages over .400 despite not hitting for much power.

Nimmo isn’t the most exciting fantasy player outside of OBP leagues, but it’s much too soon to typecast Carter. He has potential to grow into more power as he matures physically, and his early stolen base totals are encouraging. On the other hand, it’s unlikely he’ll be able to maintain a walk rate over 20% as he faces tougher pitching. His range of possible outcomes is still very broad.

Carter has proven himself worthy of his draft selection, but he’s still had less than 150 PA. Scouting reports vary on his hit tool and his physical projection. They all agree that he’s a high-risk, high-variance prospect. He isn’t near the top of most Rangers prospect lists I’ve seen, but many of the names above him are there because they’re closer to the majors and have higher floors.

Dynasty managers should focus on upside, and Carter has it. He is a potential five-category fantasy contributor who could rise in the rankings with a good 2022 season. I would not try to acquire him at all costs because there’s still plenty of risk, but he may be available for cheap or even unowned in shallower leagues. That is a gamble I would happily take. 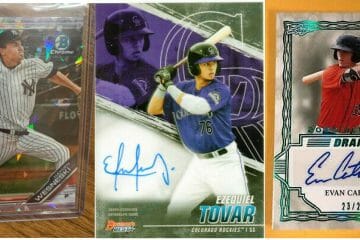