The games on Sunday? They weren’t good or fun. You know what is good and fun? Making trades in dynasty football. If you really wanna have fun, as you should, trade for these guys.

Patterson’s 2021 is magical enough without being the first player to be mentioned twice in the six-week history of this column, but now he’s done that too. Entering the weekend, Patterson had put up RB1 numbers despite playing roughing 1/3 of the running back snaps behind Mike Davis. On Sunday, after Atlanta’s bye, Patterson played 2/3 of them, and had 60 rushing yards and a touchdown to show for it, in addition to his regular targets as a receiver. Beyond that, he just looks good as a runner—good enough to have supplanted Davis, at least. With Matt Ryan and the Falcons’ offense starting to come together, you want any of their big 4: Ryan, Calvin Ridley, Kyle Pitts and Patterson. I just traded a first rounder for Patterson in a win-now league (we have devy players, so it’s effectively a second rounder, but still) and would do it again anywhere else I could if I was trying to win and didn’t already have him on account of being smart and great. There’s a strong chance he’s the single most common player on title teams this year. You want in on that, even now. Flags fly forever, even virtual ones.

I probably should have seen this coming and I’m a little sad I didn’t. I’m a Patriots fan of a certain age, which means I’ve seen the entire Bill Belichick run, and the one constant in the running back room is that the main guy who catches passes is always going to catch passes. When James White got hurt, I didn’t realize Bolden would be his 1:1 replacement, and while I was slow to realize it, it was on full display on Sunday, which Bolden torching the hapless Jets on Mac Jones’s specialty dinks and dunks. I advise you to buy relatively high on Bolden because it should still cost you next to nothing, and he’s a great bye-week guy who has a decent floor baked into his game for the rest of the year, unless he doesn’t, at which point it still cost you nothing. But I suspect he’ll be worth the pennies.

If Hunt was the No. 1 running back for a team and was hurt right now, I wouldn’t advise trying to trade for him, because he’s too good to be cheap in that situation. Now that he’s out for at least another month, it appears, with Nick Chubb and D’Ernest Johnson set to rule the Browns’ backfield for a while, now might be the right time to make an offer on Hunt, who can absolutely start for you in the home stretch even as a No. 2, and if Chubb gets hurt again, he’d be as good as anybody. If someone is desperate for win-immediately guys, you can look a few weeks ahead and try to pinch Hunt at a value.

I’ve been waiting to throw Akers into one of these columns, because he’s just sitting there, asking to be traded for… but I had no real reason to say anything. Now I do, because Akers is apparently BACK:

I still don’t think he’ll return this year, but with the dust having been kicked up, Akers is absolutely worth grabbing if you can. Yes, it’s buying almost entirely on faith, but if Akers works out the way he could work out, he could be a top-5 running back in 2022, which is just about the most valuable thing you could have, and could open the door to so much more.

Before the season, Peter Schrager of general football media fame went on the Ringer Fantasy Football Show and said Moreau was an extremely off-the-beaten-path name to watch. On Sunday, with Darren Waller injured, Moreau went 6-60 with a touchdown, and he figures to command a good amount of attention, albeit without Waller playing. That said, 24-year-old tight ends are hard to find, and sometimes teams run into a situation where their backup is just as viable starting tight end as their starter (the Eagles, until last weekend, were the prime example of this). Moreau probably won’t do much this year as long as Waller is healthy, but he’s making a name for himself early, so if you grab him now you could reap the rewards down the line if his situation changes.

Ironically for a running back, this one is a Hail Mary pass, but Sermon is obviously talented and probably won’t play forever for a coach in Kyle Shanahan who decided, between the draft and the season, that he absolutely despised Sermon and that he would do everything possible to keep him off the field. As I see it one of two things happen: The Niners churn through their running backs as always for the next three years and Sermon eventually gets a shot and is decent, or he’s traded to a team with a coach that doesn’t despise him, and on which he gets playing time. There’s a third option where he never gets a shot but I think enough people are anchored to the idea that he’s good—justifiably—that he’ll get a chance. You’ll just have to wait for it, but the price probably can’t get any lower than it is now.

The one I like this week: Freddie Swain (WR, SEA)

When I realized that I was going to choose the same player for competing and rebuilding teams for the third straight week I decided to bite the bullet and stop separating them out… and lo, here we are. The waiver wire is the quickest part of a fantasy league to go stale, and the rot usually begins after the first month. It’s in full-on meltdown now. That said, Swain could be a nice pickup. The No. 3 receiver the Seahawks has a lot of potential value in a Russell Wilson offense, and with Wilson sidelined right now, no one’s thinking about that value. But Wilson will be back, and Tyler Lockett and DK Metcalf can’t both be healthy forever. There’s a non-zero chance the 23-year-old Swain could find himself as a viable fantasy option no later than the end of this year, and that’s usually worth dropping the last guy on your roster for. 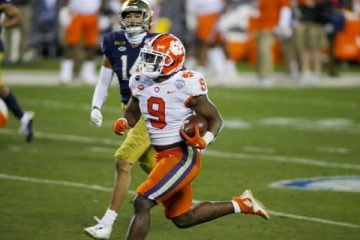