Welcome to another installment of our Prospect Spotlight Series. This time around, how about you learn all about Emerson Hancock?

Emerson was a first-round draft choice, taken 6th overall by the Seattle Mariners in the 2020 first-year player draft. He stands 6’4” 213 lbs and is 21 years old (born May 31, 1999). He credits his mother for ensuring he took his studies as seriously as baseball. In fact, he’s only the 4th University of Georgia student-athlete to ever be a 1st team academic All-American, and also get drafted in the first round of his respective sport. This is all sports, including football and basketball, so a truly impressive accomplishment.

Hancock’s got a four-pitch mix that’s highlighted by a fastball that sits 94-95 mph and touches 97 with sinking action. His best secondary pitch is a slider that was plus but continues to improve last season. It sits in the mid 80’s with lots of late break down and away to righties. The changeup is also a plus pitch, and maybe his best, also thrown in the mid 80’s. It can be thrown in or out of the zone, to both lefties and righties with good arm side run. His curveball is a 4th offering Emerson says he doesn’t throw as much but can be thrown for strikes and he uses it to give hitters something else to think about, especially to lefties.

Emerson has very good stuff on three of his four offerings, with elite spin rates and velocity on his fastball. It’s actually a comparable pitch to by these metrics to Justin Verlander’s fastball as noted by ESPN.

The pitch is generally thought to have been much better in his 2019 Sophomore year when he was widely expected to be in the conversation for the first overall pick in the 2020 draft. The pitch was thrown from a low three-quarter angle last year and showed more sink than the ability to miss bats. Emerson also has a great spin on his slider noticeable on its late break, down and away. This is a pitch that Emerson feels has improved in 2020 and that he has good control of. It’s helpful his changeup breaks the opposite way his slider and is also thrown at a similar velocity to the breaking ball. The arm action is also very good on the change, which separates nicely from the fastball as well.

Hancock’s mechanics are very sound, with a smooth delivery and moderate effort release. He gets good extension off the rubber and is able to maintain a consistent release point for all 4 of his pitches. Hancock alters his mechanics slightly from with men on base, leading with a high knee lift from the stretch and a belt-high leg lift with men on base.

A lot has been made of the angle of Hancock’s release point, which was a low three-quarters delivery in 2020 causing it to sink more than ‘rise’. As mentioned, his spin rates and velocity are comparable to Justin Verlander, but this release point is the main reason why the two pitches are very different to hitters, and Hancock’s can have trouble missing bats.

Mariners’ Director of Amateur Scouting Scott Hunter mentioned (2:10 to 3:45) Emerson was dealing with a lat strain that set him back 2 weeks early in the 2020 season and might have been something he was still dealing with in games, limiting his ability to tilt. You can see in the photos below Emerson’s release point in 2019 (left) and 2020 (right). While 2019 is not a high release point, he appears to be ‘tilting’ more with his core, and where he’s letting go of the ball is not exactly a low three quarter. 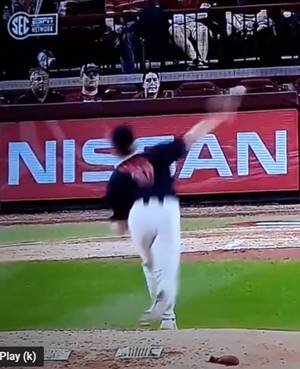 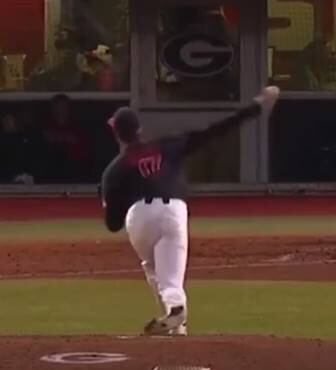 Maybe Emerson’s arm slot changed because of injury, design or if you believe it was mostly consistent, his fastball is certainly good enough to play with his other offerings, especially if the Mariners can help him perfect the tunneling action to maximize the different breaks on each pitch.

Emerson’s control is very good, especially with his fastball and changeup. He’s not only able to throw all his pitches for strikes, but these two consistently hit the catcher’s glove. It’s actually the first thing I noticed about Emerson, is the number of times the catcher barely moved his glove on pitches in the zone. If he does in fact possess the level of command of these two pitches he’s going to set himself up for a very quick trip through the minors and a successful major league career. The slider is often out of the zone by design, as a chase pitch, but Emerson says he has control of it and can throw it for strikes when he needs to. He also has good control of the curveball, but it’s a grade behind the other three in terms of stuff, though I hope he keeps working on it while being coached in pro ball.

The biggest key to success for Hancock will be if he can raise his arm angle to bring his fastball back to what it was in 2019, without losing the improvement in his slider he gained last year. If he can’t he’ll still be throwing mid 90’s and up with command, and two plus secondary pitches and a third offering he can throw for strikes. This is to say the upside is a fantasy ace, or possibly number two, with a downside of a good number three starter. There should be plenty of innings, either way, a good amount of strikeouts and few walks. Look for Emerson to need very little seasoning in the minors, with a possible call-up midseason 2022, or early 2023 at the latest assuming good health. It’s not every day we see a near major league ready pitcher in our dynasty supplemental drafts, who has such a high floor, and high ceiling. Managers should be salivating at the chance to add him to their dynasty teams.