Potentially Ill-Advised Adventures in xwOBA (and a New xwOBA Metric!)

Time’s up. These are the top 10 pulled fly ball hitters in the league over the last three calendar years. Each pulls over 33% of their fly balls, way above league average (around 24%). This group has also been moderately underrated by Baseball Savant’s xwOBA* since it was unveiled in 2015. Their wOBAs are 2% higher than their xwOBAs on average.

Tango’s response features a graph of pull tendency and wOBA minus xwOBA, similar to the one below. Like Tango’s, my graph shows no relationship between pull percentage and wOBA minus xwOBA in 2019 (all 2019 hitters, minimum 1,000 pitches seen, or around 300 plate appearances). 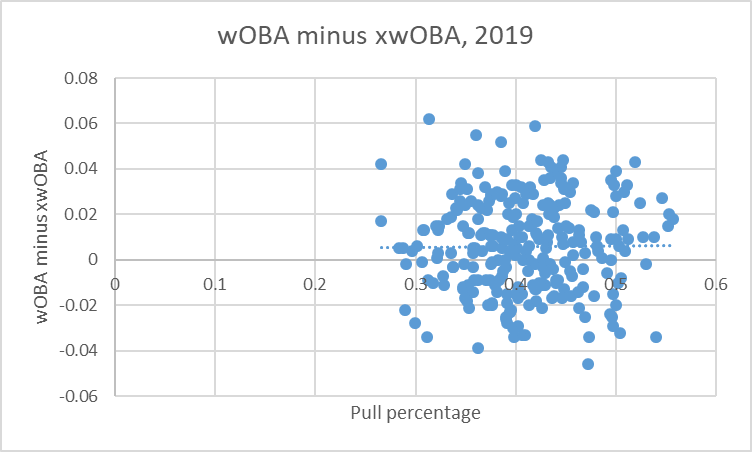 When considering pulled fly ball percentage rather than pulled percentage alone, however, a positive relationship with wOBA minus xwOBA emerges (the correlation is .22). 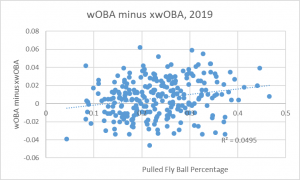 Perhaps there is in fact a small bias in xwOBA against hitters who pull a lot of fly balls. The graph below tests this hypothesis further, looking at 2018 pulled fly ball percentage and 2019 wOBA minus xwOBA (minimum 100 fly balls in 2018, 1000 pitches seen in 2019). The relationship is less strong but still positive (the correlation drops to .13). The weaker correlation suggests a lot of random noise in pulled fly ball percentage, but still some year-to-year stickiness in the metric. 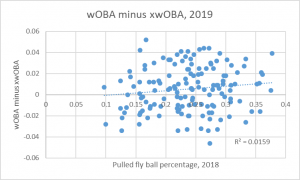 Is this likely bias in xwOBA undesirable? Not necessarily.

As Tango explains, xwOBA is a descriptive metric, like FIP, rather than a predictive one. It’s a simplification of the past, capturing the two most important batted ball indicators (exit velocity and launch angle) and ignoring noisier and less useful evidence.

Depending on how it’s done, incorporating pulled fly ball percentage could make xwOBA noisier and potentially less informative, rewarding hitters too much for luck-based, random fluctuations in pulled fly percentage. Done well, and incorporating pulled fly ball percentage in some modest way could make the metric more informative and less biased. In any case, future updates to xwOBA will likely incorporate pull tendency in some form (Tango and MLBAM are constantly improving their metrics, and have already incorporated sprint speed on certain batted balls in 2019–we fans are in good hands!).

In the meantime, on the grounds that it’s interesting to see the differences that emerge, I’ve generated a quick and dirty updated xwOBA metric that incorporates pulled fly ball percentage along with some other metrics potentially underrated by the current version of xwOBA (other metrics correlated with wOBA minus xwOBA). To generate the new xwOBA,  I regressed 2019 wOBA on Baseball Savant xwOBA, pulled fly ball percentage, and a few other theoretically relevant variables discussed below (2019 sample, minimum 1,000 pitches seen). 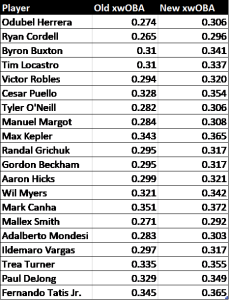 Here are the biggest losers in the new xwOBA metric compared to the old oner: lots of older, slower players who are shifted often. 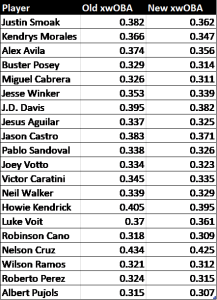 What I’ve Added to xwOBA aside from fly ball data

Here are the other theoretically relevant metrics correlated with wOBA minus xwOBA, and their 2019 correlations in parentheses: percentage of plate appearances where a batter is shifted (-.07); opposite-field fly ball percentage (-.10); sprint speed (.28).

Potentially Ill-Advised Adventures in xwOBA (and a New xwOBA Metric!)