Process-oriented fantasy baseballers, aka Camp Chris Archer, obsess over things like K%-BB%, groundball %, SIERA, xFIP, velocity, and spin rates. Camp Chris Archer particularly likes to focus on strikeout and walk rates in small samples to find underperformers and breakouts. This is because walk and strikeout rates become 50% stable pretty quickly, less than 40 innings for both. They’re a useful indicator of sustainable success even in small samples—some research has found K%-BB% is the most predictive indicator of in-season success.

If you can’t be bothered with statistics, skip to the bottom of this article now for a leaderboard of expected strikeout rate minus expected walk rate–my own version of Mike Podhorzer’s models with some new twists (see appendix note for how the models compare). You can also head to The Dynasty Guru’s quick and dirty google sheet to generate expected strikeout and walk rates yourself. Just download a copy of the spreadsheet and you’re set (or enter on the google sheet).

Onwards, the pitch component variables included in my models capture varying degrees of skill. Generally, more swinging, foul, and looking strikes lead to more expected strikeouts; more balls lead to more expected walks. The year-over-year correlations for the relevant metrics are displayed below (2016-2019 data, minimum 1000 pitches, or about 10 starts, in a season). For reference, pitchers in the sample average around 18% foul strikes, 12% swinging strikes, 16% called strikes, 17% in-play strikes, 63% strikes, 65% strikes when behind or even in the count, and 76% strikes in three-ball counts.

Notice that strikeout rate has a strong .71 correlation with itself from one season to the next. This confirms the obvious—strikeout rate is, to a significant extent, a repeatable skill. Perhaps less obviously, the other variables mostly have similar year-over-year correlations to strikeout rate; they’re likely also repeatable skills to a similar extent. One exception is the lower year-over-year correlation of .4 for three-ball count strike percentage. It’s more luck-based than other variables but still captures some skill. The last three columns show the correlation of April 2018 performance with post-April 2018 performance. I wanted to make sure ‘even count or pitcher behind strike %,’ and ‘three-ball count strike %,’ are repeatable even in small samples. Correlations above .6 lend support to this idea. It’s more important for a pitcher to throw strikes when the count is even or the pitcher is behind. It’s less important to throw strikes when the pitcher is ahead–when pitchers often try to get batters to chase out of the zone. Some pitchers are better at throwing strikes in unfavorable counts than others.

Note on regression tables (see appendix for multicollinearity footnote): green cells are statistically significant at p<.05 (less than five percent chance a coefficient differing from zero is a result of random chance–at least in this sample with typical selection bias problems of baseball studies); yellow cells are statistically significant at p<.1; white cells aren’t statistically significant. It was necessary to leave one variable out of each model to avoid perfect multicollinearity.  In the first-row model, a 1% increase in swinging strike percentage increases strikeout rate by 1%. A 1% increase in foul strike percentage increases strikeout rate by .28%. In the second-row model, a 1% increase in pitcher behind or even count strike % is associated with a .27% decrease in walk rate (this metric is in different units than the others). Swinging strikes, looking strikes, and foul strikes are each associated with higher next-season strikeout rates – in decreasing magnitude.

First, I looked at how well strikeout rate and walk rate in season one each predicted themselves in season two. Pitchers with at least 1,000 pitches (about 10 starts) in successive seasons were included spanning 2016-2019. Strikeout rate predicts itself well, explaining ~50% of itself in season two. Walk rate does worse, with season one walk rate explaining ~30 percent of the variance in season two walk rate. The pitch components models perform about the same as the baseline models. They don’t add much explanatory value. This is line with expectations because strikeout and walk rate become quite stable over the course of a whole season; luck plays less of a role in a sample this large. Pitch components models should offer more value in smaller samples, when strikeout and walk rates are less stable and more luck-based.

If we look at only April 2018 performance to predict post-April 2018 performance, the pitch components models show their worth. Luck plays a greater role in strikeout and walk rates in a given month, when they’ve had less time to stabilize. Adjusted R^2 is around five percent higher for each of the pitch components models. While the baseline models still do fairly well here, the pitch results models add explanatory value and should reveal some interesting outlier performers that are doing better than their strikeout and walk rates suggest. Interestingly, the pitch components models here perform a bit better than the best full season models looked at in the first table – even though they only use April performance. This is some evidence on behalf of taking April breakouts and busts seriously.

These are descriptive models of the past rather than predictive models of the future, so adjusted R^2 values are very high (adjusted R^2 captures the percent of overall variation in strikeout and walk rate explained by each model). It’s easy to build a great descriptive model of the past – just include a variable to capture four balls and three strikes in at bat and you’ll surely have an adjusted R^2 of 100%! The goal here wasn’t to build a useless model with a 100% adjusted R^2, though. Rather, I included variables that capture skill more than luck, to describe the present more accurately than actual strikeout and walk rates—at least in small samples. As we’ve seen with the earlier models, each of these variables is a repeatable skill offering predictive value for strikeout and walk rate, even in samples as small as one month—with one exception. April three ball count strike percentage was not a significant predictor of post-April walk rate, and it was only slightly predictive of next season walk rate. In small samples, it appears to be more luck-based than skill-based, so I dropped it in model 2. Over a full season, three ball count becomes slightly predictive of next season walk rate, but these models are intended to be used on small samples. On the other hand, strike percentage in even counts or when the pitcher is behind in the count has been validated in every test I’ve run as a significant predictor of future walk rate (outside of walk rate itself). Strike percentage in even counts or when the pitcher is behind appears to be a more important skill than throwing strikes in general. This aligns with common sense, as pitchers ahead in the count often try to get batters to swing at a pitch out of the zone.

Leaderboard (updated through games of 7/19, only starting pitchers, minimum 1000 pitches):

Note on multicollinearity: some of the explanatory variables are highly correlated but as long as they are not perfectly correlated none of the regression assumptions are violated. Ordinary least squares regression uses the uncorrelated part of the independent variable to find the partial effect on the dependent variable.  Multicollinearity does not bias the adjusted r^2 value or the coefficients on the explanatory variables (see Woolridge’s “Introductory Econometrics,” or similar, for further explanation). 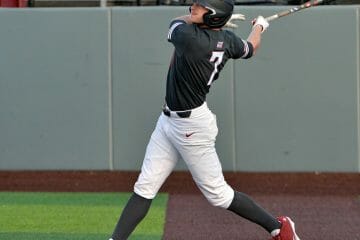 Digging for Diamonds: Round 6

Digging for Diamonds: Round 5