The pre-arbitration extension is one of baseball’s popular new trends. But one might have slipped under the radar this offseason: the new deal signed by Tampa Bay Rays’ youngster Brandon Lowe.

Late on March 19, Ken Rosenthal reported that Lowe had signed a 6 year, $24 million deal with Tampa that included two club options. Lowe had shown off his power last September and with the new deal in place, it only made sense for him to start 2019 on the big league club.

Lowe has heated up after starting the year with nine hitless at-bats, and Joey Wendle’s time on the Injured List has afforded him a path to playing time in the infield. He can also play first base and corner outfield, so upon Wendle’s return the Rays should be able to keep a good bat in the lineup. 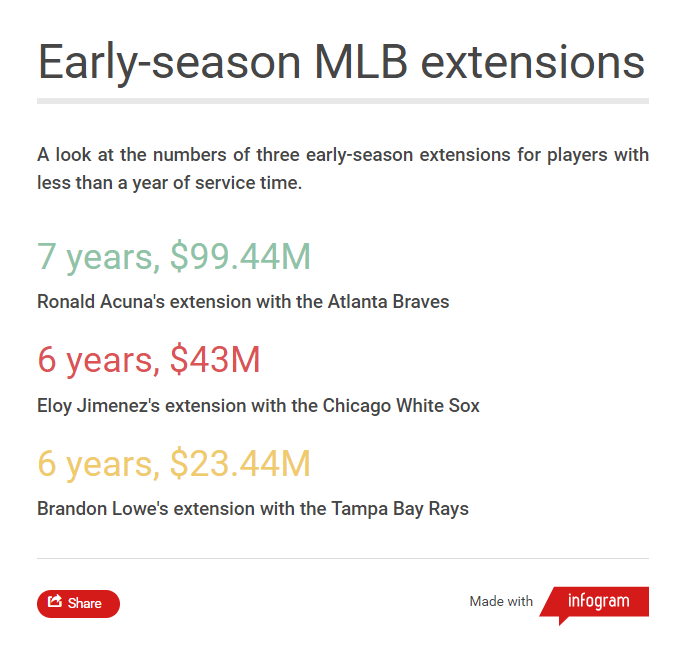 In an admittedly small September sample of 92 batted balls, Lowe had a hard-hit rate of 43.5 percent. That’s higher than Jose Abreu, Anthony Rizzo and Josh Donaldson, among many others. It’s dropped to the mid-30s this season, but that’s still right near much larger power hitters like Ryon Healy and Justin Bour.

Lowe doesn’t fit the power-hitter profile: He’s 6-foot, 185 pounds. Fangraphs ranked him as the fifth prospect in the Rays’ organization before this season, and that was after his big September. The year before, he slotted at No. 16 on the same list. He’s gone from “doubles-oriented power” to “the offense has taken off even more than those highest on him internally had expected” in just one season.

But before everyone rushes to trade for Lowe, there’s a catch: He strikes out, a lot. His rate is at 30.5 percent in the early going (as of publication time). It was in the low-20s in the minor leagues last year, so he has a shot to adjust.

From watching some of Lowe’s at-bats in the early going, part of his strikeout-prone nature comes to the forefront in two ways: Deep counts and letting the ball travel. Lowe isn’t a guy dying to swing at the first pitch; he’s closer in pitches seen per plate appearance to patient slugger Mike Moustakas than noted early-hackers Jose Altuve and Ozzie Albies. The more pitches a hitter receives, the more likely he ends up seeing three strikes.

Letting the ball travel is not a new baseball concept, but in the launch angle era, it’s taken on new meaning. On Lowe’s best swings, his bat head remains in the strike zone for a long time while letting the pitch get deeper on the plate. Letting the baseball get deep can lead to late swings on fastballs inside — that’s partly attributable to Lowe’s early strikeout totals. But when it goes right, Lowe can show power to all fields, like he did on this outside heater from Ervin Santana on April 9.

Brandon Lowe's homer from yesterday, where he let the ball get deep and kept the bat head in the zone long enough to go oppo. #Rays #MLB pic.twitter.com/rVtKVNcw2F

For dynasty owners, Lowe’s future position matters. If he happened to hold multi-position eligibility for a few years, he’d only be more valuable. At least this season, he might have to play all over the diamond, so that’s a realistic expectation. Lowe’s rather quick ascension might make him available in some shallower leagues, and in deeper leagues he’s a worthy trade target from someone who doesn’t quite know the value they have.

His strikeout rate should decline from its early-season peak, at least by about five percentage points. The power to all fields should continue to play as Lowe gets his lower half into swings and keeps his bat head in the zone for a long time. He isn’t a slow runner, so while he doesn’t steal a ton of bases, his BABIP shouldn’t be terrible.

Lowe’s value to the Rays comes from his hitting floor and his multi-position capabilities. Those are both things of value to fantasy owners, as well. Big league pitchers had tape to make changes in their approach to Lowe, and it appears he’s already overcome the early battle of adjustments.

Rays’ manager Kevin Cash has hit Lowe fourth in most games against right-handers, showing a belief in the lefty’s ability. There’s no reason for fantasy players to not have the same level of confidence in Lowe.