These articles are intended to help you find value. The stocks of these players are based on their performances in 2018. However, that does not reflect whether you should buy or sell the player. For instance, many buying opportunities tend to be in the “faller” sections, while sometimes selling options tend to be in the “riser” sections of these articles.  Here’s hoping that you find your dynasty Cinderella.

Shortstop is a position that is both incredibly young and at the peak of its glory for fantasy players in our lifetime. There are many young and talented players at the position, and more are on the way. Including the dreamy Wander Franco. More on him later!

I was dead wrong on Trevor Story. In the preseason I most-definitely thought he was going to be a bust at shortstop. However, it turns out that he’s a freakin’ superstar who plays in Colorado. Those players become staples of championship dynasty teams.

Here’s the big change between the previous iterations of Story and 2018: he made a lot more contact and cut down his strikeouts significantly. 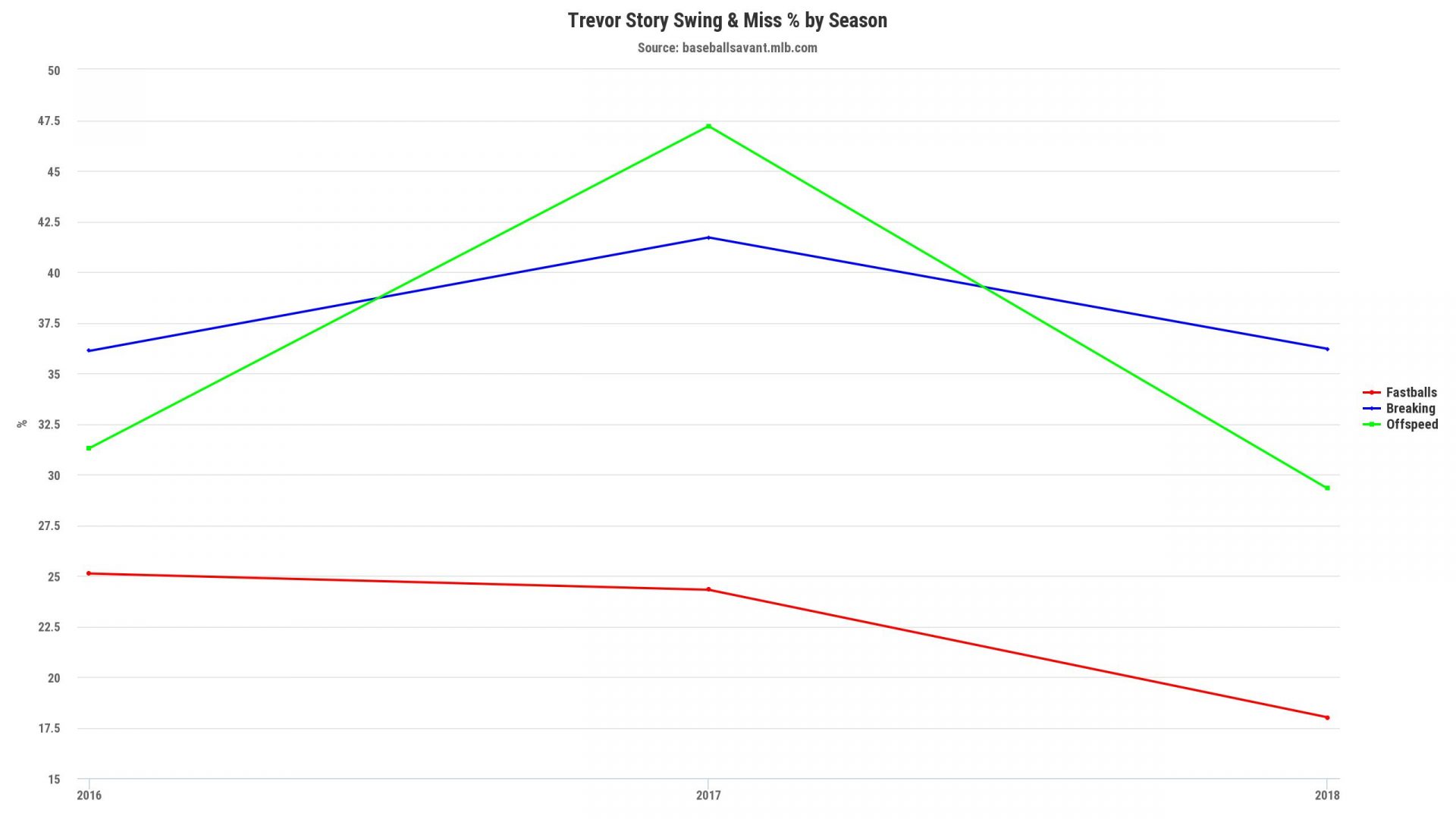 The biggest change appears to be his ability to better recognize offspeed pitches, but he swung and missed less often on all pitches. Story actually swung the bat a bit more than he did in previous years, but it was the amount of contact that he made that allowed him to soar into the top tier of shortstops. 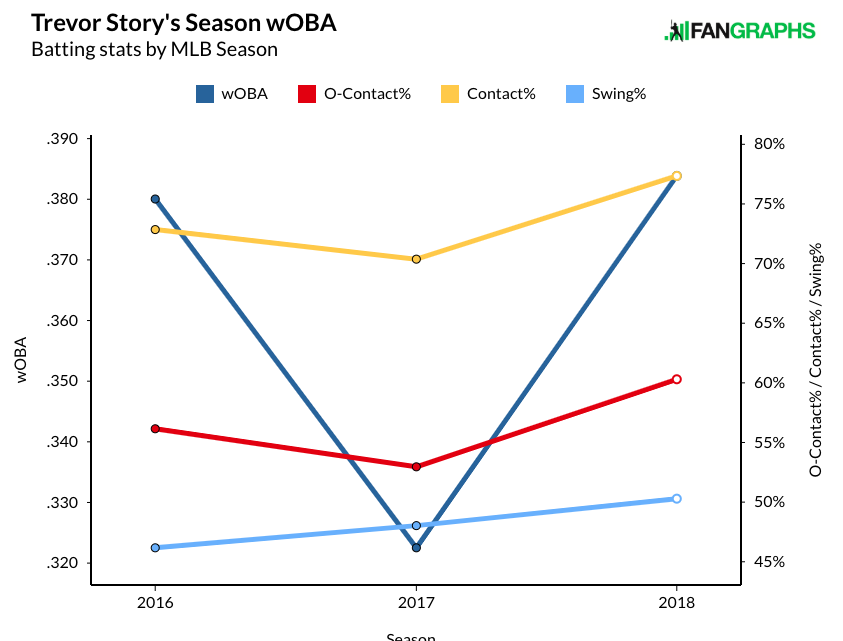 Story gets a lot of credit from analysts for lowering his strikeout rate, but let’s slow our roll a bit: the dude is still striking out 25% of the time, and we can’t pretend that that is good, because it’s not. It is just better than the 34% he was whiffing before.

Another remarkable thing about Story is that he was able to increase his power! He raised his ISO from .219 to .276, and his exit velocity from 88.9 to 90.7 MPH. Increased contact and power led him to barrel 12% of his hits. That’s good for the top 6% in the league. Yowzers.

I was skeptical before, but I’m now a true believer. Bring on all the shares of Story I can get. Oh, I failed to even mention that the dude stole 27 bases. He’s now a perennial 30-20 threat. Yes, please. I love this Story.

I’ll admit to overlooking Wander when he was first signed. I wasn’t all that excited about his prospects as a future baseball player, and that was a mistake. The young shortstop came out with a bang in his first season in pro ball. After further review, I’m embarrassed I didn’t take him more seriously. He will be the number one prospect by the end of 2019. The Rays are most certainly going to get their $3.825 million worth out of Franco.

His swing is quick to the ball and he leverages well it for power. Fangraphs has a 55 on his raw power, but it’s definitely 60 in my opinion. That’s easier to say though after he posted a .236 ISO and 11 home runs in 273 at-bats.

While he was impressive with the bat during his 2018 campaign of destruction, he did not perform well on the base paths. Franco was caught stealing 43% of the time, but this was most likely an area where the youngster was still learning the game. It warrants keeping an eye on though as he advances through the minors.

Along with the ISO and home runs, Franco posted a .351/.418/.587 slash-line, while walking 9.9% of the time, and striking out a mere 7%. Oh, and he did all this while being 3.3 years younger than the rest of his peers. He’s certainly ready for full-season ball next year, but don’t expect a Juan-Soto-like ascent to the majors from the 17-year-old. The Rays will take it slow with the youngster, and we probably won’t see him in the show until 2021-2022. He’ll be worth the wait.

In 2018 we started to see the Jurickson Profar we were promised. The post-hype second baseman found himself playing all around the field, but where did he play the majority of his games? Shortstop!

Now with the recent retirement of the beloved Adrian Beltre, it’s possible that Profar is now the starting at the hot corner, and 410 innings at third last season certainly gives credence to that idea. He’s valuable at either position (544 innings at short), and he should receive ample playing time at multiple positions.

Enough about playing time already. The real question here is whether we are going to continue to get this good version of Profar.

Before we dive into the Statcast stuff, a surface level look at Profar’s stats suggest that this may be sustainable. The biggest changes in his profile are a decline in his strikeout rate and an increase in his ISO. He’s hitting the ball more often, and with more authority.

In 2018 Profar managed to hit for league-average exit velocity, and increased his launch angle to above league-average as well. And while he cut his swings and misses on all pitches, he’s made significant improvements against off-speed pitches (23.2% in 2018, down from 33.3% in ’16). There’s little doubt that this is where a significant amount of increased contact has come from.

The breakout looks legitimate to me. He’ll be more valuable in OBP leagues than average leagues, but he’ll still bring the power and speed combo that made him so intriguing to begin with, along with a ton of positional flexibility (at least for 2019 anyway). Go get him.

Remember when I talked about Jurickson Profar getting the lion’s share of starts at shortstop? That would be because the former all-star Elvis Andrus fractured his elbow in April. This resulted in 261 fewer plate appearances for the veteran shortstop.

The 20 home runs in 2017 seem like an anomaly, but I think that maybe his power sits somewhere in between the results of ’17 and ’18. For instance: Andrus barrel percentage increased by 2.4% between the two years. His barrel percentage remained the same in 2018, but the results differed. His xwOBACON (expected BA on contacted balls) dropped to a gross .304 from a much better .343 in ’17. That is weird.

My only guess is we can assume that there was a drop-off due to injury, and that he should bounce back in 2019. Hitting the ball harder, and doing everything else the same as your All-Star season should produce similar results. That didn’t happen to Andrus, and at 30 years of age, coming off a down year, he’ll likely be undervalued in most dynasty leagues. Go ahead and do a price check on Andrus. He should bounce back to 15-20 stolen bases and 10-15 home runs.

Too many ground balls, not enough hard contact, and inefficiency on the base paths caused the former top prospect back into the minors for parts of 2018. Arcia was coming off a decent sophomore campaign, and there was the allure of a middle infielder who provided a bit of pop, solid average, and enough speed to matter. However, Arcia hit most of his baseballs right into the ground (55%).

Fewer fly balls, more ground balls, and fewer homers. Arcia saw his ISO dip to a putrid .072 last year (down from .130 in 2017). Furthermore, his average launch angle fell to 3.3 degrees (from an already low 6.2). You can see the relation between the shift in Arcia’s launch angle and his wOBA in the graphic below.

After being demoted Arcia played well in the minors, but those numbers are a bit inflated playing in Colorado.  Upon his return to the majors, Arcia managed to hit .290 in his final 145 at-bats. Those final at-bats showed some life from the 24-year-old. So, there is the possibility he rebounds to somewhere near his 2017 season, but I’m still very skeptical of his fantasy value.

My primary concern? Speed. When he has been on base he hasn’t been all that good at stealing bases. He was caught 36% of the time in 2018 and had a Fangraphs speed score of 3.5. Without plus power, plus speed, or an average hit tool, there doesn’t look like a whole lot to get excited about, fantasy-wise.

There are just too many red flags with Arcia to recommend buying low on the young shortstop. Speed, an asset all fantasy teams are desperate for, would appear to be an ineffective part of Arcia’s game. He’d need a significant swing change to hit for much power. And his batted ball profile looks like junk. No thanks, pass.

There is no doubting Correa’s talent. The dude is an absolute stud when he’s on the field, but he has an awful lot of trouble staying there. At the young age of 24, the last thing we should have are injury concerns. Yet here we are three years into Correa’s major league career, and we’re drowning in concern over his health.

Over the past three years, Correa has missed 140 days. Missing that many days with that many injuries is going to cause most people to slap the injury-prone label on a player. The back injury from 2018 is the most concerning as you don’t enjoy hearing a young player say that he’s afraid to swing the bat.

All the required skills are there for Correa to be a stud at shortstop for your dynasty league. However, I doubt very much that he’ll be ranked as the number one shortstop in our rankings come spring. The health issues for a third year in a row are enough to knock him down, and if he’s on your team make sure that you have a reliable bench option for the time he’ll miss.

Shameless Plug: If you’re looking to learn more about Correa’s injury struggles (among others). I strongly encourage you to listen to our podcast featuring Dr. Mike Tanner. You will learn a lot!