Seth Lugo and his Filthy Curve Are Worth your Time

The Mets are, by and large, a hot mess. They are either 16 or 8 games below .500, depending on how insufferable you are, 25th in run differential, and still paying Bobby Bonilla. But they have some interesting arms. I was going to come up with some sort of clever descriptor that could apply to DeGrom or Thor and then BLOW YOUR MIND by stating that it was, in fact, SETH LUGO. But you’ve already read the title, so nevermind. So why should you care about Seth Lugo’s curveball? Read on to find out.

Every league I’m in has holds as a category (either on its own or as a part of SV/HLD), and my strategy includes looking for SP-eligible relievers to plug in on days I’m short on actual starters. Under those low-stakes circumstances, Seth Lugo was a no-brainer add for me this season. Luckily for me, he has performed well above those limited expectations.

The 28-year-old’s stats are a pleasant surprise this year:

These are solid numbers across the board. What’s more, Lugo recently made a few appearances in the starting rotation. Over those five starts, he compiled a 3.52 ERA  and 27 strikeouts to only 6 walks over 23 innings. Not bad!! What’s he done differently this season that could account for this increased effectiveness? After taking a look at the above peripherals, I took a look at his pitch usage to see what’s changed. 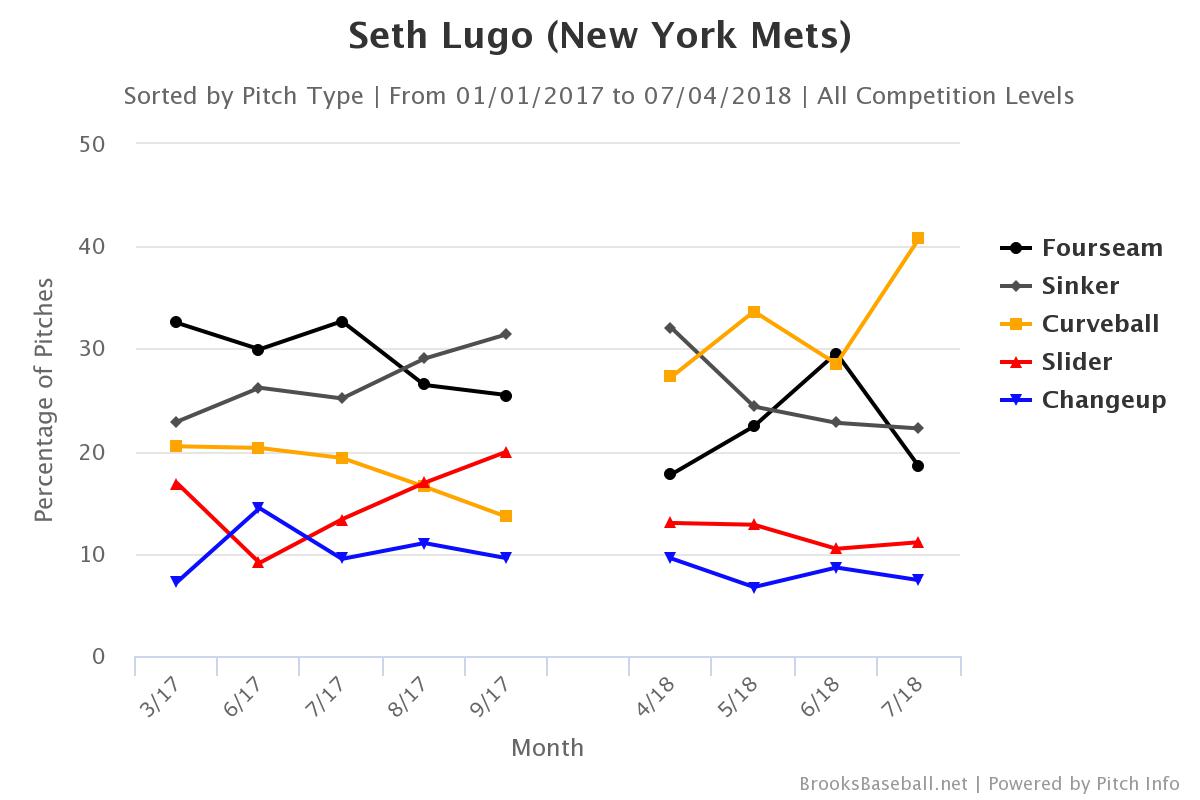 Wow, neat! If you think that’s a huge increase in curveball usage, you’re correct: it’s up from 17.59% last year to 30.25% this year, at the expense of every other pitch. There have been some interesting correlations to this increased usage.

Second- spin rate. Seth Lugo is third in the league in breaking pitch spin rate at 2936 rpm (minimum 300 results). He was not first last year. Adjusting a little for a full season / the minimum of his breaking results last year (minimum 500), he was 9th. at 2714 rpm.  I think it’s clear that there’s a correlation between increased velocity and increased spin rate. So what’s he doing with the curve this year? Let’s take a look at his breaking locationing last year versus this year, courtesy of Brooks Baseball:

If anything it seems he’s getting in the zone a touch more, but that could be due to the increased usage. So he’s throwing his breaking balls more often, faster, and nastier but in the same general place. How is this translating to results?

The answer is: very well, judging by his pitch type linear weights. Now, that hyperlink will tell you that these linear weights aren’t necessarily predicative, but for our purposes it’s good to tell us how this increased usage, speed and spin have translated to results. I prefer the standardized runs by pitch (i.e. how many runs each type of pitch produced over 100 pitches). From last year to this year, his wFB/C (fastball) has jumped from .72 to 1.46, and his wCB/C (curveball) has jumped from -.61 to 2.11. When you adjust the leader board to his 60 innings pitched, Lugo’s curve has been the 4th most effective curve in the majors this year, behind Corey Kluber, Jacob DeGrom, and Zack Greinke, and ahead of Blake Snell!

Of course, if you ask Dynasty’s Child co-host and semi-pro troll, Keaton O. DeRocher, he will probably tell you that he’s uncorked some increased speed and played around with his pitch mix due to his move to the ‘pen this year. And that’s probably true, but don’t tell him that. Moreover, I don’t think it necessarily matters. I think that he’s uncovered something with this increased usage, and I think it will play in the rotation. But about that…

Of course, Mets gonna Mets. They recently put Lugo back in the ‘pen. I get it- any time you have the chance to give the ball to Jason Vargas every five days, you have to do it. But I don’t think he’s out of the rotation for long. Additionally, this is a league of adjustments. Hitters will adjust, but then it’s a question of what Lugo does in response. Will he alter his mix or approach or sequencing or locationing before hitters catch up, or will it be too late? I’m betting on the former.
If you can afford to stash him and wait- I think you do so. You’ll get some innings and some strikeouts on days you don’t have enough starting pitchers. And when he eventually makes it back in the rotation, he’ll be a nice mid-rotation piece for awhile.

Seth Lugo and his Filthy Curve Are Worth your Time