In a start against the Mariners last week, Blue Jays Manager John Gibbons took a rare mound visit to tell his pitcher to “throw the ******* ball over the plate.” That pitcher was Jaime Garcia, and while he heeded his manager’s advice in the short-term, unfortunately for Gibbons, Garcia, and fans of pitches in the strike zone, that’s just not what Jaime does.

Garcia’s repertoire heavily features his curveball, slider, and changeup and he thrives when people chase these nasty breaking pitches out of the zone. Alas, living outside the strike zone means walks… too many walks. It can be frustrating for fans and fantasy owners to gauge Garcia’s value over the past few seasons given his control struggles and varying results, but there is a clear connection between opponent plate discipline and Garcia’s statistics.

Sorting the MLB’s best and worst teams by plate discipline over the last two+ seasons, using Fangraph’s O-Swing% metric (swings outside of the strike zone), Garcia’s results against the 10 best and worst disciplined teams since 2016 show radical contrast. While it would be easy to brush off the differences as ‘being good against bad teams’, the O-Swing% rankings don’t have a direct attachment to runs scored (Rockies and Rangers are some of the worst O-Swing teams in the league, but both top 10 in runs scored).

The 1.3 point difference in ERA and over one point difference in walk rate show that Garcia’s stats are dragged down by teams that, naturally, can lay off his junk out of the zone. This contrast can be seen in starts such as Garcia’s first visit to the mound this season, where he yielded just one run across six innings. The opponent? The second least disciplined team in the MLB, the Chicago White Sox. On a larger scale, the link between Garcia’s overall success and batters chasing can be seen in his yearly splits below. 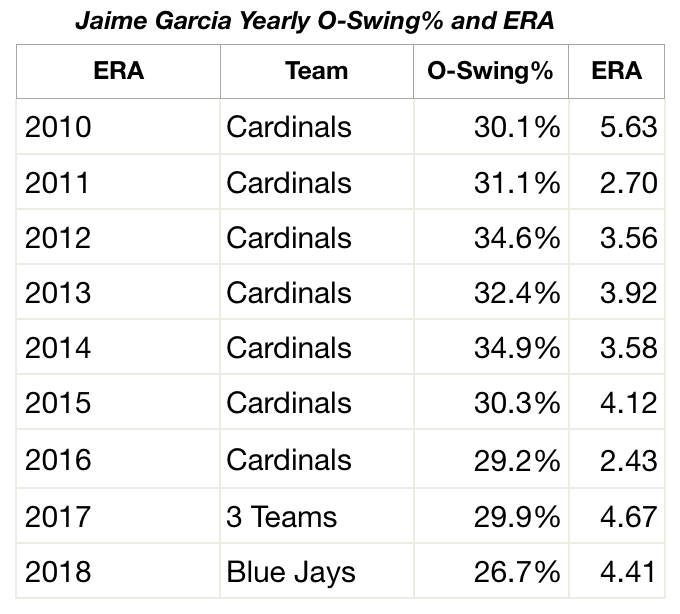 When Garcia is getting batters to chase, he is successful. This is in large part due to his changeup, curveball, and slider all being extremely effective pitches, and his fastball being quite the opposite. When forced to “throw the ball over the plate,” as Gibbons has asked him to do earlier this season, Garcia is hit around. Since 2016, his fastball has resulted in a woeful .302 batting average against, while none of Garcia’s offspeed pitches have resulted in BAA over even .240.

While Garcia is only borderline ownable in most formats, there are some teams that he is certainly worth starting against, as a roster player or a spot start. With the Royals, White Sox, Orioles, and Rays all in the American League and amongst the MLB worst in O-Swing%, Garcia isn’t a bad bet against the chasers of the league. There’s value to be had here, if you play your matchups right. 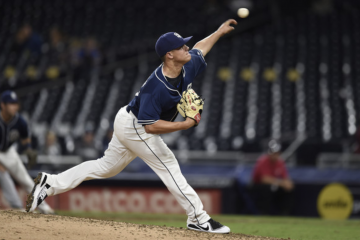 Age Ain’t Nothing But a Number – Part II