The 32nd starting pitcher drafted by ADP, Sonny Gray is not off to a good start. Through four starts and 16.1 innings, his 8.27 ERA and 2.08 WHIP are not what you were expecting out of any of the pitchers, let alone a guy who is probably your SP3. You’ve held tight and resisted the urge to overreact, but with April drawing to a close, you’re starting to lose your grip. Is it time to panic about Sonny Gray?

It’s definitely not going to be this bad all year. His .379 BABIP stands out as an extreme luck factor outlier, a full 100 points higher than his career mark. Even if you expected his BABIP to rise in Yankee Stadium, his current number is still way beyond sustainable and going to come down to something around league average.

Furthermore, his batted ball profile has actually improved. By FanGraphs, he’s got the highest soft contact rate of his career at 20.3%, and his 28.8% hard-hit rate is the lowest since 2015 (when the ball was different). Hitters are also pulling his pitches at the lowest rate of his career by a large margin – 35.6% vs. a career 42.9% mark. More on that later.

Gray’s Statcast numbers aren’t so great. His 92.1 mph average exit velocity is 7th highest among starters (min 50 batted balls), and nearly half of those batted balls have been 95mph+. In 2017 his EV was 86.7 mph, which was fairly middle of the pack. There’s more to batted balls than velocity though, so don’t hit the eject button yet.

Then there’s his walk rate. It’s hovered right around 8% for his entire Major League career, but so far in 2018 sits at 12.8%. It’s a small sample though, and looking at his strike rate…tells us that’s not it either, because it’s his career-average 46.8%. The issue seems to be first-pitch strikes: he’s only thrown 47.7% of first pitches for strikes, compared to almost 60% prior to this year. Swing rate is also down to 40.5% – it’s been in the mid-40s the past four seasons. That’s starting to paint a picture of Gray getting behind, getting into hitters counts, where they can be more selective about what they swing at. I still want to know why he’s throwing fewer first-pitch strikes, and I may have part of an answer

The big thing that’s changed for Sonny Gray is his pitch mix. First, his fastballs. Last year, according to Pitch Info, he threw roughly 30% four-seamers, 33% two-seam/sinkers and just a handful of cutters. So far in 2018, his four-seam usage is under 19%, two-seam around 27% and he’s throwing that cutter 8.5% of the time. On the off-speed side, the big news is that he’s more than doubled the use of his curveball; largely at the expense of his slider, but also his fastballs. His changeup usage remains around 6%.

That’s a big jump in curveball usage, and he hasn’t been afraid of opening at-bats with it, either. In 86 batters faced, he’s thrown 27 first pitch curve balls. That could have something to do with that first-pitch strike rate. How’s the pitch performing overall though? Well, opponents are slashing .133/.188/.200 in 32 plate appearances with 12 of his 15 Ks so… pretty good. It also accounts for just 2 of his 11 walks, but he doesn’t throw it at 3-0 or 3-1. Those counts are all fastballs.

As for that cutter he’s so fond of now, we can’t really look at results as only four plate appearances have ended on a cutter. It’s averaged right around 92mph, about half a tick slower than his other fastballs. He’s only thrown 9 of 27 for strikes and hasn’t gotten many chases on it. It’s still a tiny sample, but I’m left wondering what he sees in it. Maybe it’s just because he doesn’t like his other options? Well, the four-seamer was pretty good last year, holding opponents to a .703 OPS. The sinker resulted in a .763 OPS but had a 12% swinging strike rate, which is excellent for a fastball. Both have obviously been worse so far this year, but that’s true of all his pitches except the curve. So I have no idea why he fell in love with the cutter. Nonetheless, let’s move on and see what we can glean from where the balls are going.

I’m wary of putting too much stock into these numbers since Gray only has 59 Batted Ball Events so far, but they do shed some light on the situation nonetheless. Most notably, this chart shows us just how Gray is getting killed: 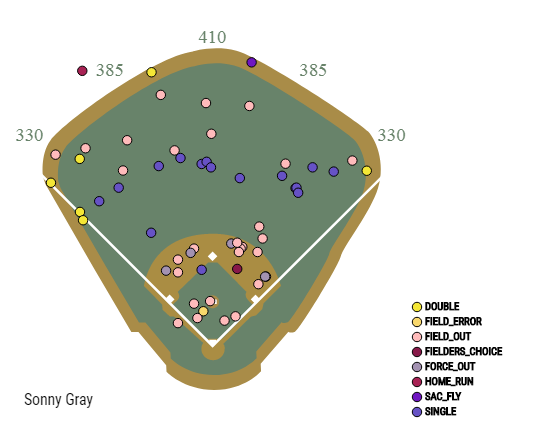 What stands out is that line of shallow outfield singles. Those fall in the 125′-275′ distance range and generally come from launch angles of 5-10 degrees. If you’re thinking of those as “bloop” singles, I’ve got some bad news. While there were a couple softies in there, they averaged a 96.5mph exit velocity. StatCast has a tool that lets you see the results of all balls hit at a specific speed and angle. Here’s that chart for just a 92mph EV, Gray’s overall average in 2018: 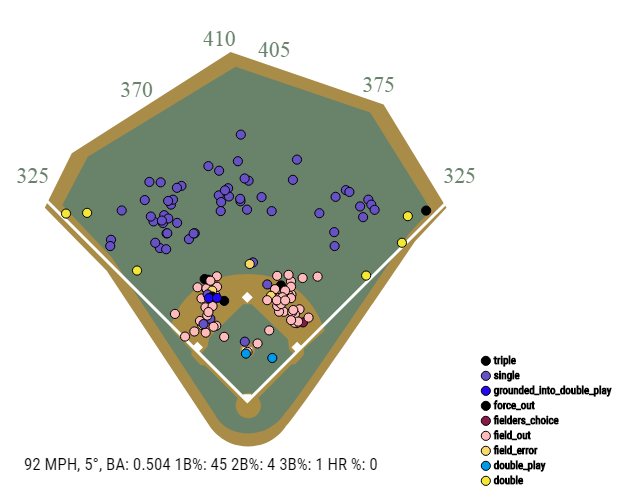 Yes, that’s a .504 BA on balls of this type. That’s not good. They are almost all singles though, which isn’t so bad. They’re only going to do a lot of damage if you cluster too many of them together, which Gray certainly has. You can also see in his launch angle chart (below) that closer to 80% of those balls in the 0-10 degree range are falling for hits against him, when typically it would only be half: 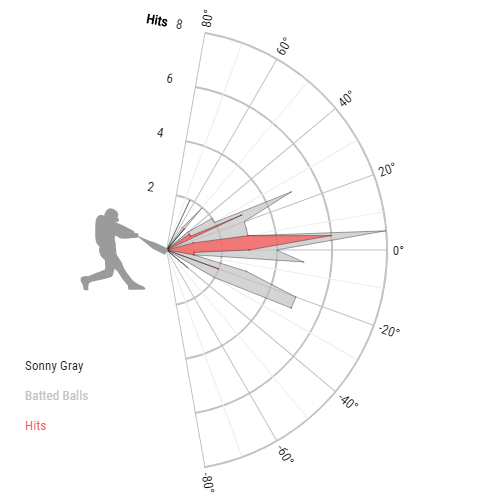 Now, I promised I’d come back to pull percentage, so here we go. I put it here because it’s probably the least solid data we have, but it would be very significant if it continues. First, this is Sonny Gray’s spray chart for 2017, heat-mapped for frequency: 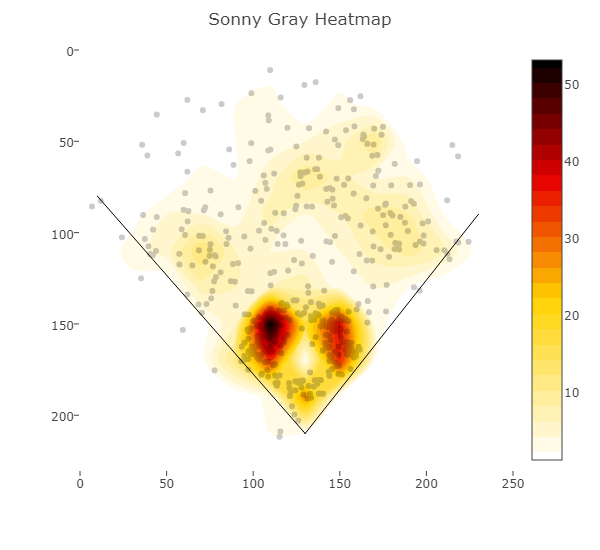 That’s pretty normal. The two big splotches are righties and lefties pulling the ball on the ground. The splotch on the left is bigger because there are about twice as many right-handed batters as lefties. Now here’s Gray’s 2018 chart: 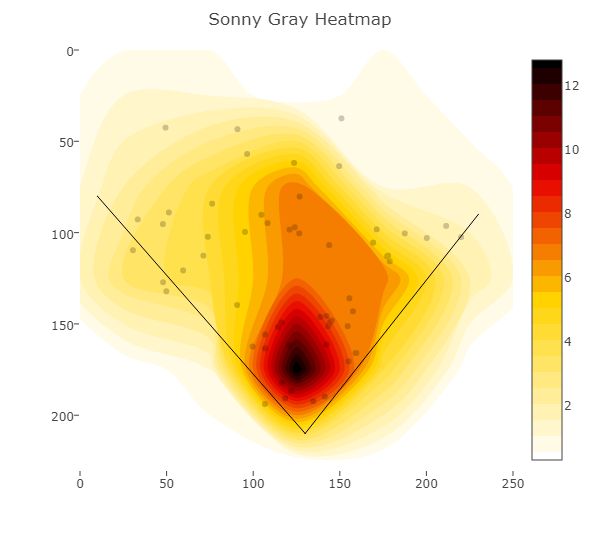 Again, caveat the small sample, you can see the batted ball count on the right, but this is an unusual pattern. For one, it’s almost all up the middle. There’s not much being pulled at all. Factoring in the FanGraphs batted ball splits, the orange part in the outfield is actually RHB going oppo more than lefties pulling. Gray’s overall distance is up in 2018, but if you just look at balls making it out of the infield (Warning: splitting small samples) it’s actually down 286 to 272.5. One homer could even that up, but it still tracks with all the shallow, line drive singles.

Huge IF here, but IF Gray’s change in pitch mix is causing this, and it holds, the Yankees will need to adjust their defensive positioning to match it. I haven’t looked at how much they’re shifting or how deep they’re playing, but it’s possible they need to be playing more shallow in the outfield, while playing back on the dirt and favoring the first base side, even for right-handed batters.

Sonny Gray has given up kind of a lot of hard, low-angle contact. Normally this would be manageable, but he’s gotten unlucky both in terms of batted ball results as well as clustering. He’s also changed his pitch mix to throw a very good curve ball more often, including to start batters off, which has resulted in a low first-pitch strike rate, more hitter’s counts and a few extra walks. That’s easily fixed. I’m also willing to chalk some of the poor results up to Gray adjusting to his new pitch mix. So Gray should be much better going forward, but I have a harder time saying how much better based on the changes he’s made. I just don’t know what the new normal is for this version of Sonny Gray, and we may not really know until the season is over.

Personally, I’m holding on to Gray in the two leagues where I own him, but I’d be considering any buy-low offers that come in. I’m not giving him up for nothing, but if I could get like 75% of draft day value to fill a team need, I’d probably do it.