Part of the April ritual for fantasy baseball owners is to jump on early season breakouts and then hope and pray that the statistics you’re seeing (which I call “the symptoms”) are real. While our community at large has gotten much better at diagnosing the root cause of the symptoms, we could still improve our understanding through better synthesis of batted ball data for hitters. Let me expound on the concepts by way of six examples of players we can monitor for real change this April – one from each division.

First off: damn it Xander, why did you go and get hurt? At this point in the season we’d have had enough data to figure out if you were making improvements to your batted ball profile, but now we’re stuck with the dreaded Small Sample Size. 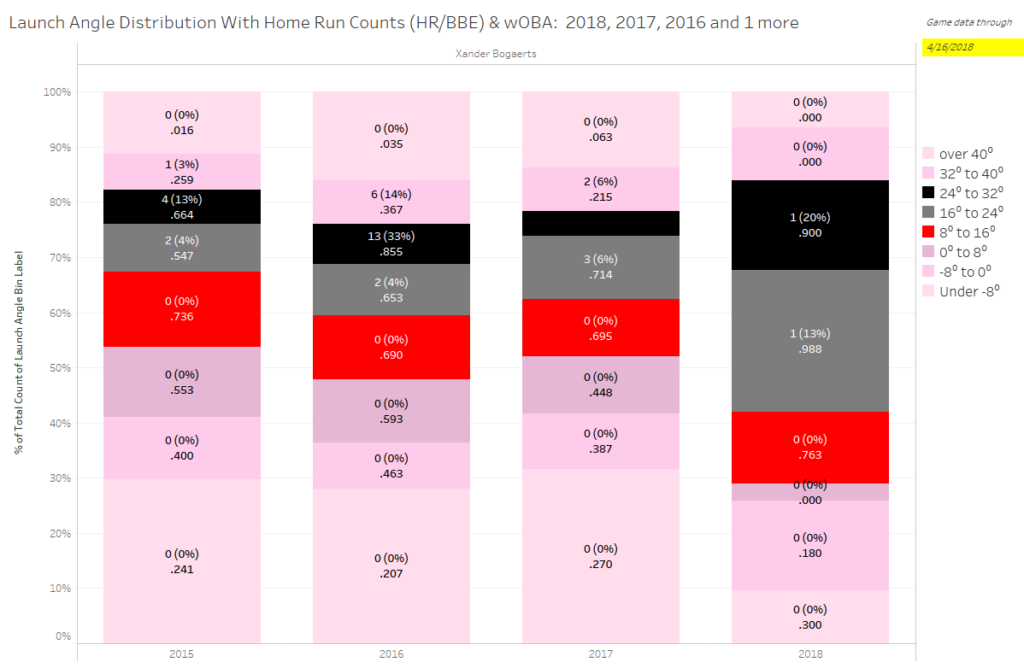 What we know about Bogaerts is that early on he was absolutely locked in and mashing the ball. He probably wasn’t going to finish the year hitting ground balls at a 30% clip, and he probably wasn’t going to average one Statcast™ Barrel per every 5 batted ball events (BBE). The latter would put him in the exclusive company of Joey Gallo, Aaron Judge and J.D. Martinez from the 2017 season. By way of comparison, Bogaerts has averaged 1 Barrels per 25 BBE (4%) over his first three seasons.

So what we do know is that this season Bogaerts was hitting 6 out of 10 balls high enough to do lots of damage and he was hitting a large majority of those really hard. Personally, I can’t wait until he comes back so we can see if there is real change for X-man.

Another AL shortstop makes an interesting deep-dive subject for batted and non-batted ball outcomes. The reason I cite non-batted is that the biggest improvement we’ve seen in the early going is that Tim Anderson is patient enough to take walks to the tune of 10.7% (as of the time of this writing). Tim Anderson hasn’t had a walk rate higher than 4.4% at any level since 2013, in his first professional season in A-ball! Take a look. That green “BB” box has tripled in size in the early going this year leaving him with a .321 OBP. 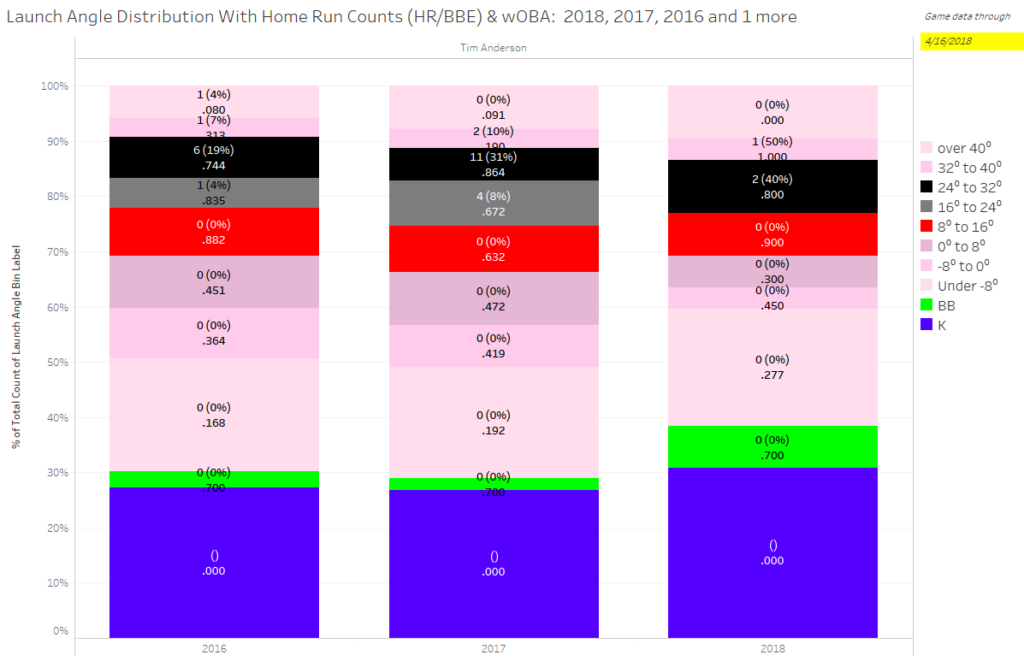 Anderson hasn’t really gotten the bat going on hitting fly balls this year, but the ones he has hit, he’s smoked. Take a look! What we’re hoping for from Mr. Anderson is continued ability to barrel up balls in approximately 5% of his BBEs. That’s what’s lead him to the brink of the 20HR plateau, and any further growth (in either pulling the ball in the air or top-end exit velocity) will only add to his chances of hitting the 20-20 or 25-25 plateau this season.

Remember when everyone was singing the praises of the other Matt on the Oakland infield all offseason?  So far, all Matt Olson does so far this year is strike out, whereas Matt Chapman is crushing baseballs all over the Oakland County Coliseum and other ballparks across America. Let’s compare the two sluggers side by side to gain an appreciation for what the Matts are doing. 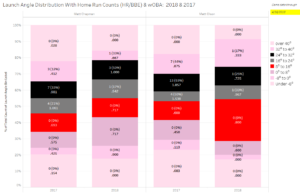 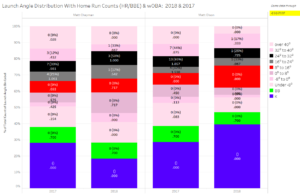 See that? While Matt Olson’s K% is going the wrong direction, Matt Chapman has found a way to cut down on his Ks while maintaining his walk percent and is in full-on breakout mode. This is the point in the season where I’ll make a strong-buy in a trade offer on a guy like Matt Chapman, because we have enough data to know the breakout is likely real but not all your league mates know it. If you give it another four weeks to wait and see I promise you’ll have missed out on the opportunity.

Matt Chapman is hitting balls hard in the air, though he doesn’t pull the ball as much as Matt Olson. That being said, if he’s going to crush balls this hard he’s not going to have to pull them to hit them out of the park.

Matt Champman is hitting balls hard on the ground! Yup, he’s totally running a .476 BABIP on ground balls because he’s destroying them as well! The only box I haven’t ticked between these two charts is the line drive box (8-16°) and he’s hitting those just as hard with a totally normal for LD BABIP of .667.

Let’s check back in on the Matts again in May, but in the meantime make an offer for Chapman.

In case you were wondering if Ozzie Albies debut last year was a fluke: it’s not. Because what Albies is doing is so amazing, I feel the need to show his batted ball profile next to a tough comp. I’ve pulled in Freddie Freeman, world’s best hitter not named Joey Votto, to contrast against Albies profile. Though Albies isn’t drawing walks to start the year, he also never strikes out. Further, it doesn’t matter when he’s MASHING EVERYTHING IN SIGHT! 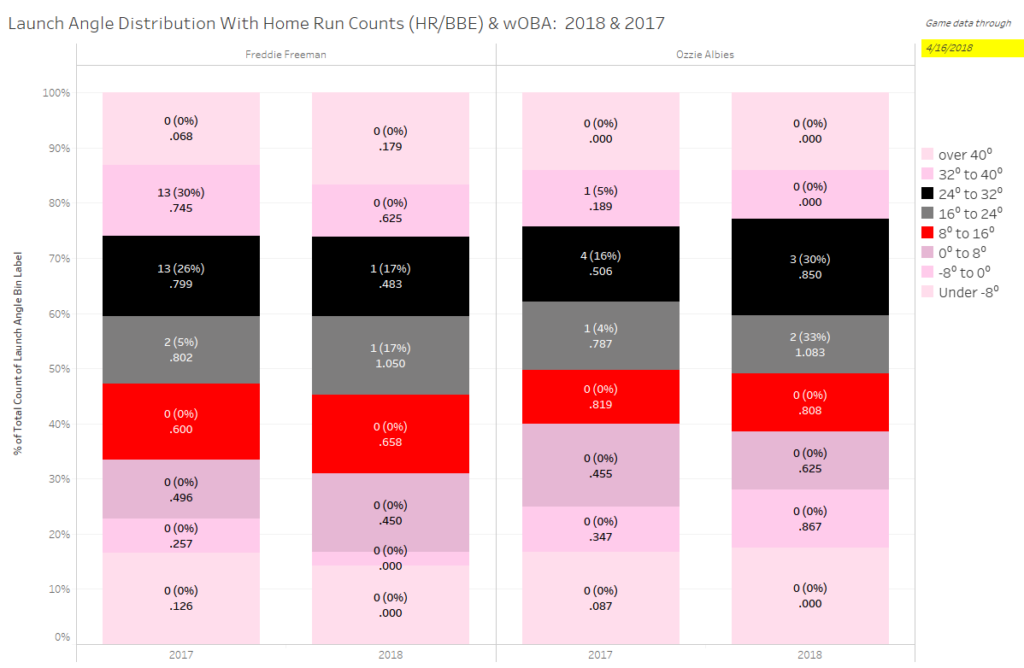 Ozzie Albies doesn’t quite have Freddie Freeman’s power to centerfield – yet. But then again, he is currently the youngest player in Major League Baseball so perhaps we’ll give him a break.

I don’t think people quite recognize just how special this kid is just yet but that narrative is going to keep building over the course of the coming weeks. Albies already has the batted ball profile of a special player locked-in and he hits the air-ball as hard as other hyped youngsters like Rafael Devers or Rhys Hoskins. If I gushed about him any more than this I’d probably have to start an Albies-only podcast, so I’ll stop here. If you don’t own him anywhere,  find a way to change that. 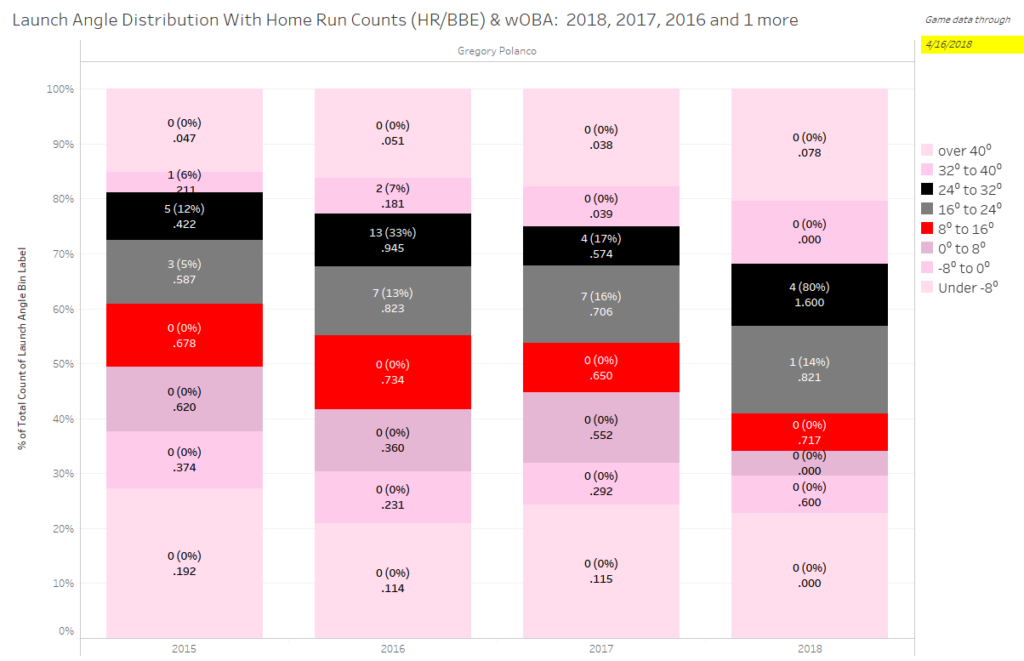 Two things are true so far in 2018 about Gregory Polanco. His launch angle is up due to positive improvements in balls hit between 8 and 32° and he’s barreling a larger percentage of them this year (15%) compared against his career average (~5%). I have four takeaways from his batted ball profile chart. First of all, he’s traded some high value (wOBA) ground balls in the 0-8° range for more fly balls over 32°. This is a net negative effect of the possible change in launch angle. Secondly, he’s currently got a .000 wOBA in the “chopper” bin, which feels a bit unlucky. Next, he’s hitting a greater percentage of balls at HR launch angles (grey and black bins) even if the line drives (red) have collapsed a bit. And lastly, your largest red flag is that 80% HR/BBE ratio in the black bin. You can see his career average there has been maybe 20% with a peak of 33% two years ago when he was completely healthy.

Let’s keep monitoring Gregory Polanco to see which, if any, of these perceived changes stick when we revisit him next month. For now I’d be cautiously optimistic, but if you can sneak him into a deal to get a power upgrade by selling someone on his “breakout” you probably won’t be unhappy. 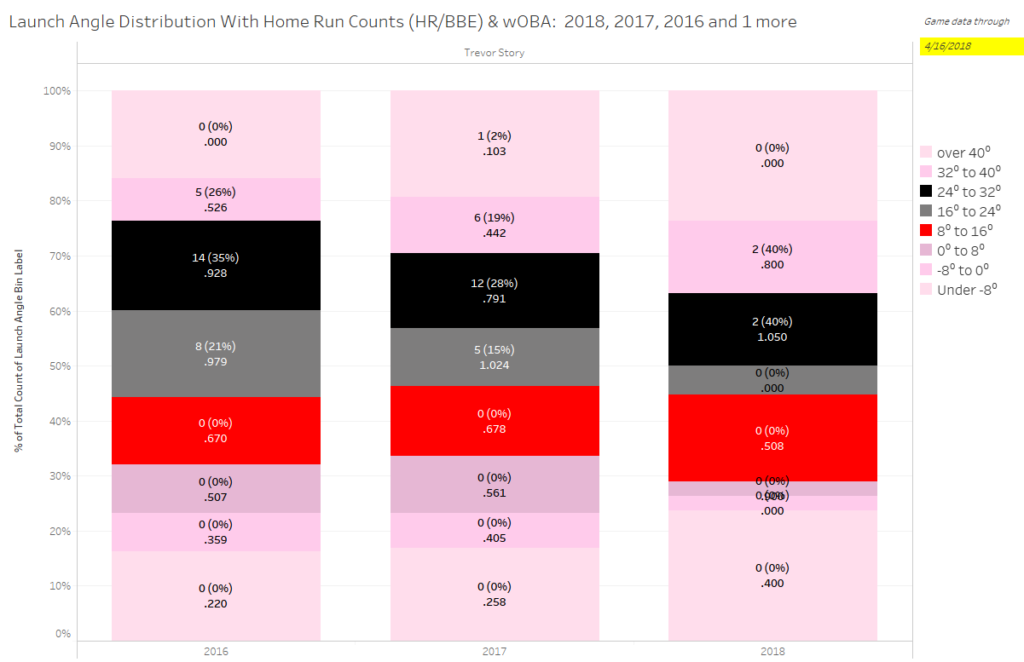 I think we’d all really love to see 2016 Trevor Story again – the guy who barreled everything. Sadly, I think he was a mirage. A not-full sample size, two-thirds-season, mirage. He’s probably still going to hit his fair share of home runs, but he’s also going to hit a ton of mile-high flyouts. You can see he’s also overachieving in the early going on his choppers in the bottom pink box with a .400 wOBA. The two positives here are he is hitting the ball really hard in the air, which has lead to numerous home runs, and he’s hit a lot of line drives in the early going. The unfavorable luck on liners (.508 wOBA) and the favorable luck on choppers (.400 wOBA) will likely even out as we progress through the season and you’ll still be stuck with the low average, high strikeout, lots of HR power guy we saw last year.

If you’ve enjoyed this piece and there are players you want to look up on your own, please feel free to use this batted ball profile tool I have out on Tableau Public. It’s probably a bit busy, but I like to err toward having a lot of information available at my fingertips. I’ll check back in on these hitters and a few new players in May. 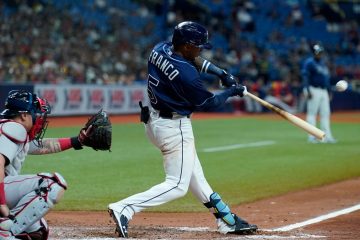 Dylan Bundy: The Ace We've Been Waiting For