The other day, I was trying to explain Statcast’s “barrels” metric to my dad. I basically rambled on about launch angle and exit velocity without really knowing what I was saying. Like all resourceful people in this age of the smartphone, I looked it up today, multiple days later. While it is more complex than this, a barrel is basically a batted ball that has the exit velocity and launch angle that result in an expected batting average of .500 and slugging percentage of 1.500. Basically, balls that are crushed at an optimal angle. The guys at the top of the leaderboard for barrels are big, strong men. Khris Davis, Aaron Judge, Freddie Freeman, Ryan Zimmerman, Miguel Sano. I’m more fascinated by one player who has yet to ‘barrel’ a ball this year, as of May 25: Xander Bogaerts. I want to figure out what, if anything, that means.

Bogaerts was a highly regarded prospect coming up in the Red Sox system. So much so that in 2013 he was playing for the Red Sox in the World Series even with only 18 regular season games under his belt at the ripe age of 20. That grand stage made Bogaerts the No. 2 prospect for both Baseball America and Baseball Prospectus heading into 2014. For the most part, he has delivered. After an acclimation year in 2014, he broke out to hit .320 in 2015, but with only 7 HR. In 2016, the average dropped to .294, but the homers rose to 21. Now, in 2017, we’ve reached barrel-less Xander: he’s hitting .335, but had yet to homer prior to his first on May 25. Is the barrels statistic lining up with Xander’s production? 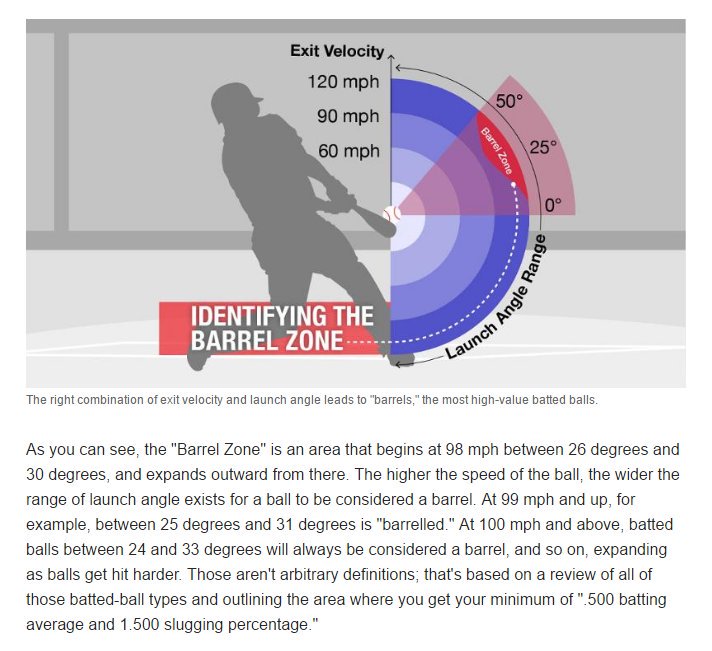 There are two ways I’m going to attempt to attack this issue, in hopes that even those of you who don’t like or understand Statcast can be on the same page as me: batted-ball type and swing mechanics.

First, let’s look at Bogaerts’ batted ball distribution. This year, he has the highest groundball rate and lowest flyball rate of his career. He hits groundballs 54.9% of the time according to Fangraphs. He also hits infield flyballs, or popups, 10% of the time. Both groundballs and infield flyballs basically have zero chance of being barrels. The launch angles of those balls are too extreme to result in the juicy expected numbers that barrels do. While Bogaerts has hit 34 balls at or above 95 MPH, his batted ball profile suggests that many of those would have been on the ground, eliminating the opportunity at a barrel. His batting average on balls in play also suggests some luck, as it’s at .398, way above his career average. Making the Statcast barrel argument, there is just more luck involved when hitting the ball on the ground.

Bogaerts’ swing mechanics suggest just the type of batted ball distribution that Bogaerts has. While there have never been drastic changes to his swing, this year Bogaerts has possessed a bat path as non-conducive to crushing balls in the air as ever. The first word that comes to mind when I see him swing is ‘slash.’ Another is ‘slap.’ Most hitters these days focus on trying to hit the ball in the air; their bat path will bring them up, out, and through the baseball. They will finish high, bats pointing skyward. Look at Bogaerts’ finish to his swing from a recent line drive hit off Mike Leake:

Sorry for the grainy photo, but the point remains: Bogaerts’ swing is very flat and rotational through the zone. His goal is not at all to hit the ball in the air. It’s simply not made for climbing the leaderboards of this new barrels stat. But what does this all mean for him?

I said it near the top. Xander Bogaerts is hitting .335 this year; if that held, it’d be a career high. He has some of the most gifted hands in baseball. Just because he doesn’t hit the ball at an optimal angle for homers doesn’t mean that he hits the ball softly. Plenty of hitters who win batting titles aren’t gifted power hitters. But many expected more from Bogaerts coming up; especially after his 21 HR season, people figured that was the norm. But with this swing, it probably wasn’t.

The only hitter with more batted balls than Bogaerts without a barrel is his teammate, Dustin Pedroia. In case this is your first rodeo, you should know that Pedroia has carved out a remarkable career with a swing-path that is not all that different from Bogaerts’.

This article is by no means a condemnation of Bogaerts. But keep it in mind when deciding whether he fits on your fantasy team or not. In a league where home runs are extra important, there might be better options than a guy who has yet to hit what Statcast has declared as an optimal batted ball this season. That hasn’t stopped him from posting what would be his career-high in OPS. Bogaerts remains one of the most talented hitters in baseball. Just don’t expect him to all of a sudden start hitting boatloads of homers without a drastic change in mechanics.

Note: Bogaerts’ home run on May 25 may change the statistics of this article slightly. It was hit at such a low angle that I’m not sure whether it will be a barrel; my source has yet to update with new information. The points of this piece all remain the same.