In dynasty we are always looking for the next great thing to build around, constantly attempting to produce a franchise cornerstone. Unfortunately, the 2018 draft is not looking like the place to do that kind of shopping for your team. I’ll profile a few of the 2018 players, but the key here is to read this through to the end.

This years draft is rich on pitching. They are coming from both the high school and college side, but for the most part, pitching prospects are red flags. To prove my point here are some of the previous years top college and prep arms according to mlb.com, and how they’ve looked so far as pros:

So the best pitching from high school and college over the past 5 drafts are not looking great. This conforms with the idea that pitching prospects fail at a high rate, and the upcoming arms that litter your next draft player pool match that statement.

According to MLB.com 5 of the top 10 draft prospects are pitchers, with one of those also being a first baseman (Brandon McKay). Thirteen of the top 20 are pitchers. Baseball America has six of the top 10 being pitchers, and 11 of the top 20 being arms. Now if you’re coming in dead last and you are hoping that you can potentially get Shohei Otani, if he comes over, that pick is worth it since he Japanese success has already shown us his risk is much lower than the standard pitching prospect. But here are the top college arms:

The other two pitchers from the top 10 are from high school:

So the picture is bleak, the high school arms seem promising (they always do), however we’ve learned this is the riskiest investment of them all. The college arms have warts, with McKay hopefully being drafted for his plus bat. The top bats aren’t flashing the across the board tools you’re looking for with a top pick. Those bats are the following players:

But 1000 negative words are quite enough, the reason for this article is not to bash the class of 2017 as it may have seemed, but to shine light upon the glorious class of 2018 that we have to look forward too, and the two main bats that it will gift us:

These hitters check the boxes that Brandon McKay checks, plus more. If you are trying to get players who can separate themselves from the rest of the field, that’s not going to be happening this offseason. So if you can move picks, flip them while you can and stock up for 2018, that’s when the studs are coming. 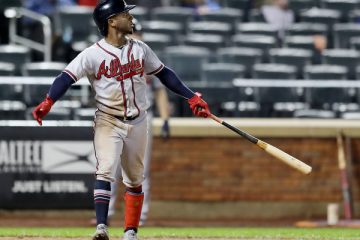