For reasons I cannot believe, we have had a pitcher slip through the cracks of the ever-sweeping fantasy prospect radar. When I personally try and find arms to fill out my minor league staff, there is a search for the following traits:

Those are some crude ways to go about finding arms, but so far it’s led me down a path of projectable power arms. Obviously, they don’t all succeed, but if you want to minimize risk in the fantasy game, navigating around likely bullpen pieces is ideal.

With those snippets of opinion and fake news, comes my newest discovery. 7th rounder out of Houston, Patrick Weigel. Weigel checks all the boxes that it takes to get my attention. He is listed at 6’6 240lbs, and in case you were worried he’s a fat slob, I will assure you he is not. One look at the guy shows you that he’s a physical specimen. But being an adonis doesn’t make you fantasy worthy, results and scouting reports do, perhaps he has those, to the next paragraph we go…

This is where Weigel being ignored becomes a little more perplexing. Weigel, despite being in a Braves farm that was/is littered with other well known arms, gets little to no publicity. Last year Weigel was ranked second in the Braves farm system in strikeouts, wins, and ERA.  While wins are antiquated, he was a serious threat for winning the pitching triple crown on his team, whilst being an unknown commodity. He also flaunted durability rarely seen by Low A-AA pitchers, throwing 150 innings last year, managing that total in his first full pro season. In conclusion, he piled up Ks, racked up innings, and had a 1.042 WHIP during his successful 2016.  His anonymity doesn’t make sense.

To make matters more mystifying he is universally liked by talent evaluators across the board.  Baseball America placed a future 60 grade on him, Baseball Prospectus put him 11th on the team ranking, but proceeded to praise his plus 93-97 MPH fastball, along with his above average slider and curve, with an already 50 grade change up.  MLB.com essentially reported the exact same info as BA and BP.  He throws all of these pitches for strikes, and if you were wondering how he did against other teams top 20 talent, MLB farm found he gave up a stingy .225 average with only 2 doubles, 1 triple, and 1 homer over 151 at bats.  His 3.3 BB/9 is the only weakness, and if that can be resolved he’ll profile statically very similarly to the new hotness that is Mitch Keller.

Those factoids are all nice, but fast forward to today and the Braves have jumped Weigel from Low A to AA this year, and have him set second in their rotation behind Max Fried, and ahead of Kolby Allard and Mike Soroka.  In his admittedly small sample size of 2017, he has continued to shove, and he has improved his timeline to the MLB greatly over the past year.

Now the purpose of this article is not to tell everyone to push all of your chips into the Weigel pot, but if you’re looking to add an arm in a league that rosters over 200 prospects give him a look. In the rankings process for the TDG300 prospect rankings, we had 5 writers rank Weigel, 4 put him in the top 200, and 4 failed to put him in their personal top 250.  I think this is a pretty good reflection of a guy with talent that a portion of the fantasy community is totally unaware of right now.  However, if he continues to get outs in the upper minors, I can’t guarantee that trend continues. 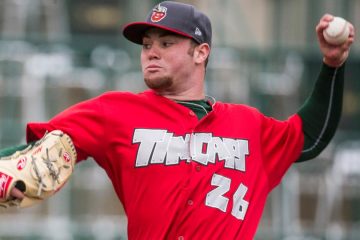 This is Your Last Chance To Buy; Late April Edition