Continuing my quest to temporarily patch your dynasty teams, I bring you Brett Gardner.

So it’s happened to all of us. You’ve built 90% of your team, and now you’re searching for the last few guys to slot into your lineup. You add a guy with some upside and a lot of risk and say “if he blows up I’ll keep him, otherwise it’s back to the waiver wire.”  Then Aaron Altherr gets killed mid swing, and after you’ve cursed out everyone at your office, and you’re living on the streets you realize you need a new OF 4/5. You now hit that waiver wire, but this time your strategy has changed.

While sorting through the free agents that you’ve left in the order of ESPN/Yahoo!/CBS rank, you’re seeing a similar trend of three types of guys:

These guys have been dropped and are useless, they mainly exist as a test to your sanity.

You know these players are going to max out at 300PA, but their 3 steals they got on the second day of the season have sent them rocketing to the top of rankings. Yet again, they might as well have a do not disturb sign hanging around their necks.

Here is where you find your match.

You were projecting 15HR/15SB in your optimistic mind, but now you’ll take anything you can get. You scroll through the guys, and you check individual rankings on the stats your league uses. You see Paulo Orlando (terrible), Billy Burns (can’t hit), Travis Jankowski (San Diego :< ), and Brett Gardner ( :/ ). You take a moment to collect yourself, and decide to dig deeper into the 32-year-old former burner.

Now the picture painted probably seems pretty vivid to you, and is a scenario you’ve likely ran into if you’re in a league that rosters 500+ players. Obviously if you have the chance to add Mike Trout to your team you add Trout, but in reality, you’re looking at the guys I listed above to solve your problems, and here is why Brett Gardner is a problem solver.

On most every team I own there are guys that are cornerstones, there are the reliable guys, and then there is everything else. When a guy from the first two tiers goes down, you can gamble on a boom or bust guy, but the reason they are free agents in your league of extraordinary gentlemen is because you all know he busts way more than he booms. What you also know is that in dynasty, a ton of stock is put in the future, so guys who are now year to year, one year investment performers will be undervalued.

Gardner is one of those older players who now lacks a standout skill to carry a category for you, and therefore is not worthy of being on many owners teams. On the otherhand Gardner has an underlying skillset that does allow him to play as a reliable guy with fewer HR and SB than you’d want.

The basis of a good approach can be something as simple as taking balls, and hitting strikes, Gardner has mastered these two tasks.

Gardner will not fail you when it comes to putting the bat on the ball, he is 20th best of 146 qualified hitters at taking balls, and 22nd best at hitting strikes, essentially making him the outfield version of DJ LeMahieu. He advances runners well, and has always worked the count in his favor. His high walk rate and low strikeout rate make him an ideal leadoff hitter for a real team. Speaking of, his real team’s projected lineup doesn’t look half bad coming into this season.

However, on your team he brings the security of a player who is very good at avoiding slumps. This is because on top of his contact ability he has a very pretty spray chart. 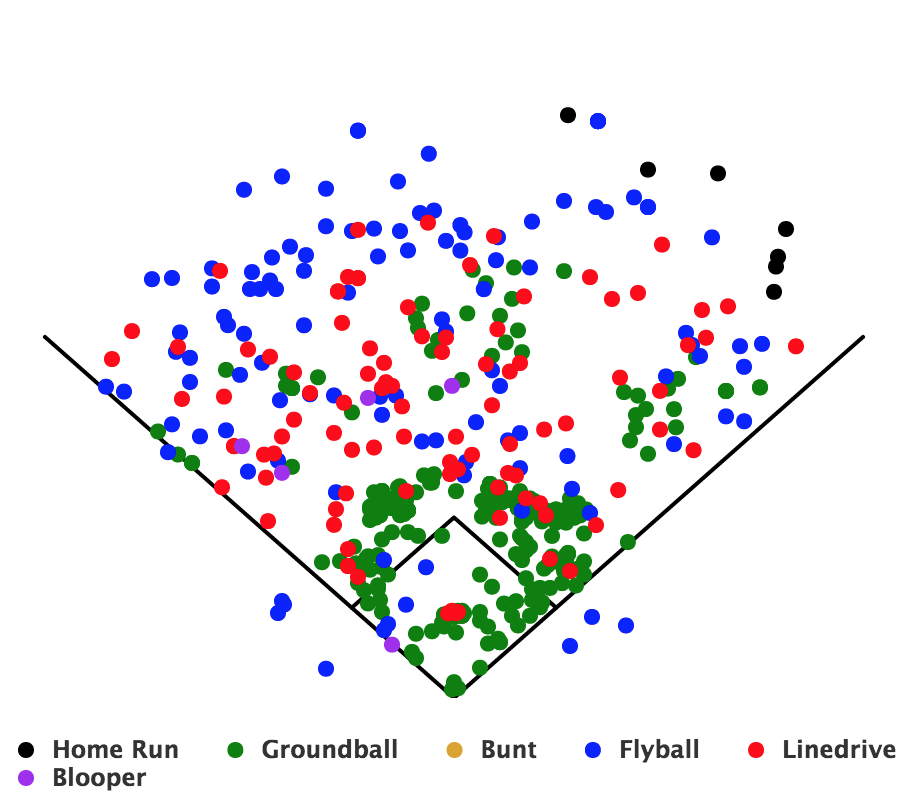 Gardner faced an over shift only 21 times this year, this is because his batted ball profile is spread more evenly than the average MLB player, and shifting too far allows him to exploit defenses with his wheels.

He also possesses lower infield fly rates than the league average, and makes soft contact at a below league average rate. Pair that with his still strong speed, 7th best BsR score out of 971 players in 2016, and you have a player who can supply reliable and solid stats until the original guy gets back from the DL, since you know, Gardner also never seems to hit the DL playing 145+ over the past 4 years.

So Gardner will not stuff your stat sheet, but when crisis’s need to be averted, Gardner is your man. You probably won’t fall in love with him, heck you probably won’t even like him that much because of his pesky nature in general, but at the end of the day the stream of 1-3, BB, R lines he’ll give you in your time of need will be exactly what your team needs.

All statistics courtesy of Fangraphs