Even though we’re through a good portion of the baseball season, it’s hard to tell which statistics are noise and which are true indicators of what a pitcher is or has become. We all know how important strikeouts are—not only to a pitcher’s success, but for fantasy leagues as well. Walks aren’t quite as directly tied to fantasy baseball, but they impact WHIP and are also an important part of a pitcher’s game. Tying the two together in one statistic yields K/BB, an extremely useful tool to evaluate pitchers that has been proven to be an excellent in-season predictor for pitchers.
Given the usefulness of K/BB, I wanted to write an article centering around that statistic and several pitchers who are stand outs in that facet of the game. There’s a couple of ways to do this, but I decided to compare every pitcher’s mark from last season to this one. It’s always challenging to diagnose a pitcher who has been drastically different from the season before, and to figure out whether the exceptionally good or bad performance is real. K/BB isn’t going to tell you that on its own, but it’s a useful way to compare a pitcher’s season from the year before, and see whether what’s now going on is legitimate. So, here are the top-5 gainers with respect to K/BB.

1. Clayton Kershaw, +11.83
As much as I’m tempted to say, “oh look, Kershaw’s good” and just move on, it doesn’t feel right to let this go without a few comments. Not only does Kershaw have the second highest K/9 of his career at 11.08, but he’s cut his walk rate to an absurd 0.58…seven walks in 108 innings. He had the second best K/BB mark last season, and he’s on pace to more than double that this season. A 19 K/BB would be the highest of all time, and the difference between Kershaw’s mark and second (11.63 by Phil Hughes) is greater than the gap from second to 198th. You know Kershaw’s good, so instead of trying to convince you he’s good, I’d rather show you just how good he really is.

2. Noah Syndergaard, +3.32
There’s quite a drop off from the first pitcher on this list to the second. Still, Syndergaard’s transformation has been nothing short of remarkable, which is scary considering how good he was before. Thor has developed an elite slider almost overnight, while managing to gain a tick or two on his four-seamer and sinker. The curveball has benefited from this, netting more whiffs and becoming harder to drive in general.

Syndergaard is now striking out hitters at a prolific pace, and the righty’s overpowering stuff has allowed him to attack the strikezone more than ever and cut down on his walks. He might like to throw it down the middle a bit too much, but there’s no reason to think Syndergaard’s season isn’t sustainable, which is a terrifying reality to anybody that isn’t on the Mets.

3. Matt Shoemaker, +1.71
Clayton Kershaw, Noah Syndergaard, Matt Shoemaker. One of these isn’t like the others. When evaluating why a pitcher suddenly takes a step forward, PITCHf/x is a favorite for analysts. Velocity and movement can sometimes lie or cause an overreaction, but pitch usage is much clearer. So, I wonder if pitch usage has changed at all for Matt Shoema—

Huh, that’s something. Shoemaker apparently started going to the school of Nathan Eovaldi and Masahiro Tanaka, and has begun to throw the splitter more than any other offering. It’s a good pitch to throw more, too. Not only is a splitter generally hard to hit, but Shoemaker’s is specifically nasty. Opposition is slugging just .269 against it this season, and the whiffs are way up.

Shoemaker is doing this cool thing called striking hitters out, something that worked for him in 2014 when he had a career year. Although the career-high strikeout rate and revamped arsenal don’t appear to have done much given his 4.50 ERA on the season, a 3.28 ERA in May and 2.20 ERA in June say otherwise. The strikeouts may not continue at such a high frequency, but Shoemaker should still be a very good pitcher for the rest of 2016.

4. Mike Leake, +1.36
A former eighth overall pick, Leake is now the preferred comp to prospects who have a limited mid/back-of-the-rotation ceiling. But could the Cardinals’ devil magic turn him into something a bit more than that? Leake has made some adjustments to his pitch usage trends, most notably largely saying goodbye to a curveball that’s been hit hard and upping his sinker and cutter frequency. His changeup has also gained some drop, and with it is has come more whiffs and more effectiveness overall. Still, Leake’s trouble with the curve (also the name of a terrible movie) has cost him some groundballs and there’s no change to his strikeout rate. Instead, the K/BB jump is a result of Leake walking fewer hitters. This isn’t exactly what fantasy owners want to hear, since the lack of strikeouts made him a less-than-appealing fantasy option and fewer walks isn’t going to change that.

Leake’s ERA of 4.08 is a turn-off as well, though that should improve with better home run luck. He’s allowing more home runs than ever before, which is odd considering his groundball tendencies and better home park (St. Louis over Cincinnati). Look for a better ERA going forward, but Leake will continue to be pretty boring in fantasy and real life due to a lack of strikeouts.

5. Mike Fiers, +1.23
Uh, so this is awkward. After touting the usefulness of K/BB earlier in this article, I’ll recommend throwing it out the window for Fiers. A lot is going wrong for Fiers this season, and just about the only positive takeaway is fewer walks. And that may not even be a good thing. The best part of Fiers’ game was his strikeouts, and those are gone. A 8.98 K/9 last season has given way to a Mike Leake-like 6.11 mark.

After looking at the PITCHf/x, this isn’t particularly surprising; Fiers getting less swings-and-misses on the four-seamer, curveball and slider. The righty is also giving up an absurd amount of home runs—a flyball pitcher is expected to give up some, but this isn’t sustainable—and has a painful 4.76 ERA. It’s hard to say exactly why everything has gone haywire, but I’m going to assign some blame to K/BB. That’s because his increase in that metric is a result of fewer walks, and fewer walks means more pitches in the strikezone.

Considering Fiers has a pretty bad fastball, throwing it more than ever in the zone isn’t a great idea. His slugging percentage on the pitch has jumped from .456 to .759, and it’s the offering he uses most frequently…so that’s not good. Fiers will have to rethink the way he approaches hitters, and hopefully get back to his pre-2016 ways. Even with some changes, though, it’s hard to imagine the strikeouts rebounding. If you still have him on your fantasy team, it’s time your Fiers him (sorry). 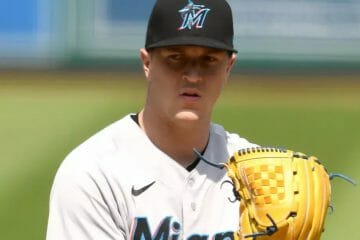 Villar you not entertained?