A new year has brought a new crop of writers to TDG, and we decided the best way to introduce our various styles, quirks, and personalities was via a mock draft. Eight of the new writers, and two of your old favorites, did a five-round slow mock draft of players who entered into the player pool in the past year. This includes 2015 international signings and Rule 4 draft picks. We’ve each written up a short explanation of our choice. Our hope is that you’ll be able to use this information to help you in the upcoming draft season. We’ll post each round separately along with a wrap-up post following the fifth round. At the end of it all, you’ll know 50+ players a little bit better, and you’ll know us a little better too.

This one is a no-brainer for me.  With his rare combination of speed and power potential, Moncada offers the most upside of the group, and unlike most of the other players who are eligible for this draft, I have the benefit of almost 350 professional plate appearances to support my assessment.  After his assignment to full season A ball, Moncada got off to a slow start.  I’m guessing it had something to do with the long layoff, because he blew up in the second half, posting a .310/.415./.500 triple slash line along with 45 stolen bases and 25 extra base hits.  The switch-hitting second baseman has the potential to fill up the box score from a historically weak position.

While Moncada is a no-brainer first overall, there are a handful of legitimate options for the second overall pick. I considered Dansby Swanson, Jung-ho Kang, and Brendan Rodgers, but eventually decided on the 2015 Golden Spikes award winner. After dominating SEC pitchers, the smooth-swinging left-handed outfielder hit a combined .312/.416/.555 between Low-A and A, with 11 HR and 10 steals in just 239 plate appearances. His gap power should play up in Fenway Park, and his 35 walks to just 24 strikeouts indicate he might be closer to the show than most players on this list.

The third overall pick in the 2015 draft, Rodgers may have the most offensive upside on in the draft.  Rodgers features a plus bat and plus power: a rare combination for a shortstop.  Even better, the 19-year old hopes to eventually call Coors Field home.  Rodgers does have more risk than both Alex Bregman and Dansby Swanson (the latter I considered for this spot along with Jung-ho Kang), as Rodgers’ is less advanced  and not as sure of a bet to stick at shortstop.  Still, his bat would play at second or third base and despite the risk and his ETA, it’s impossible to pass up on the tantalizing upside.

Swanson is a player who is entering pro ball with polish, and is primed to make an impact as soon as early 2017 for the Braves.  His hit tool is advanced, allowing him to contribute in runs and RBI, and his speed is clearly plus.  His power is the lagging tool here, being of the 10+ home run variety.  While his ceiling is clearly the lowest out of the top 4 picks in this draft, his floor rivals anyone else’s presently.  If you are in need of a player who will stick at SS, Swanson is your man, the man earns Jeter comps for a reason.

Quite a dagger that I missed out not only on ‘The Next Derek Jeter,’ but also missed out on his flowing locks. I’ll pick up the pieces from my broken heart and select somebody who can help me right now, Jung-Ho Kang.

The Pirate infielder not only gives me somebody who can help in 2016; he offers the multi-positional eligibility that I crave. Those factors put him as the second-best player available behind Moncada on my board, though I’d have Rodgers as second if I were starting from scratch. Chris Coglan’s murder-attempt/slide seems to have depressed Kang’s value this winter and I just don’t get it. In arguably the finest rookie class in the history of baseball, Kang’s wRC+ of 130 put him squarely behind Kyle Schwarber and ahead of Francisco Lindor and Maikel Franco (min. 200 PA). Unless Kang entering his age-29 in 2016 wouldn’t align with a deep rebuild, I’m always going to lean towards taking the present value that Kang provides and the flexibility that he gives me — both within my roster and on the trade market.

At this point in the draft, everyone left has risks. So why not go with the player with the highest potential reward? Out of all of the eligible players left, Dillon Tate might be the one with the highest possible ceiling. Drafted 4th overall by the Rangers out of UC Santa Barbara, the big right hander has a fastball sitting in the mid 90s, often touching 98, and a slider that projects as a ++ pitch in the MLB. How he progresses in turning his already good Changeup into an elite Major League offering may be the difference between top of the rotation potential or a bullpen spot floor. Either way, at this spot in the draft, I’d go with high reward over the lower ceilings for my other options like Happ and Bregman, even if it means waiting to a few years longer to see how it plays out.

There is a lot of talent in this draft but once the big guys get snatched up the options become less obvious. So there are a few players that I thought about taking here. Happ ultimately won me over because I’m a sucker for switch hitting college outfielders with above average hit tools but who are solid across the board. Drafted 9th overall out of Cincinnati, he’s one of the top college hitters in the class and further along in his development than most of the remaining players. Although he hits better as a lefty, his swing is fluid and compact from both sides of the plate. Currently projected to have average power, he has shown patience in his approach which, coupled with his 60 grade hit tool, should allow that power to play up. Overall, Happ has a great combination of upside and high floor which becomes less common from this point on.

It’s a testament to the depth of this year’s class that the 2nd overall pick in the June Rule 4 draft can be a polished college bat at a premium position and fall to the back half of the first round here. Bregman hit well enough across two levels in a limited sample to instill confidence that his .300-average upside with double digit home run power is realistic. His athleticism, speed, and middle infield defense should keep his floor relatively high as well. He probably won’t be a superstar, but he could reach the majors as early as 2017. There’s enough of a bias against second base prospects in the scouting world that Bregman might be cheap in most drafts this winter compared to the value he’s likely to provide soon.

This was a no-brainer for me at the back end of the 1st round. I’ll gladly take a guy that can and will help me right now. The scouting reports aren’t exactly Darvish-esque and that’s the reason Maeda is available at 1.9. The reports say a lot of the same things Hisashi Iwakuma’s reports said. He’s in his prime, healthy, and pitching in one of the best situations a pitcher can be in. The ballpark is very friendly, his catcher is one of, if not the best pitch framer in the game and he’s pitching for a team projected to win a ton of baseball games. I couldn’t be happier with Maeda at 1.9.

The Brewers got a bit of a bargain when the Texas prep product fell to them in the middle of the first round. Clark boasts excellent bat speed and bat-to-ball ability, with average or better projectable power. He had no trouble showing the pure hitting ability in his professional debut, slashing .309/.424/.430 across two rookie-level leagues. The on-base ability lends itself to a top-of-the-order future, where he can maximize his plus speed. In today’s speed-hungry environment, Clark’s stolen base potential makes him an upper tier dynasty option among 2015 draftees and provides a floor for his fantasy value that not many prep hitters possess. A .275 hitter who can swipe 20 bases and pile up runs is a nice baseline, with potential to beat that batting average projection and add a little pop. 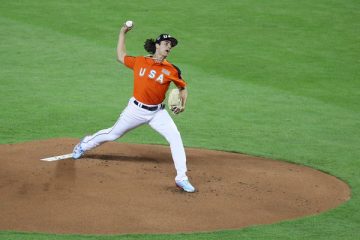 The Case For Christian Yelich

Tim
on Desk of the Editor – Humankind. Be both.