Heading into the season I had my list of favorite prospects. Not necessarily guys that were top 20 material, but guys I thought for one reason or another would be undervalued in league drafts and was excited to lay claim to in whatever leagues I could. It’s a random list in the sense that it’s personal, but I figured it’d be a worthwhile exercise to check in on a couple of ‘em to see how the season has gone, as well as offer suggestions on some emerging players who fit the mold and make for quality targets in your dynasty league.

Any list like this must always and forever start with the Cub slugger. I’ve written about this before, but one of my favorite places to turn in the never-ending search for dynasty league talent is the ranks of first base prospects. There’s an inherent market inefficiency in how these players are valued for “real” prospect purposes on account of their defensive limitations, but for fantasy purposes we just care about the bat, and none of that other stuff really matters. And perhaps no prospect in the entire minor leagues has more of a gap between his real and fantasy value than Vogelbach. That’s not to say he’s entirely without real-world credibility – he did crack the Cubs’ organizational top tens on both the Baseball Prospectus (#8) and Baseball American (#9) lists this spring. But as a fantasy asset his value is leaps and bounds ahead of that range. And the reason it is stems from the fact that while he’s a giant tree trunk of a man with 70 grade raw power, he also possesses an actual, honest to goodness hit tool to boot. Players who can homeruns are valuable players in fantasy – increasingly so, in fact. Guys that can hit homeruns and hit for average are fantasy superstars.

Vogelbach had a nightmarish start to the season but has since rebounded splendidly over the past couple months to stay more or less on track. While his triple slash of .272/.359/.433 isn’t particularly awe-inspiring at first glance, his .791 OPS actually ranks 9th in the pitching-dominated Florida State League. One area of concern is that a platoon split that had been present though not overwhelming in the past has grown much, much bigger this season. Still, he’s kept his walk rate in double digits against southpaws and some of his struggles can be traced to an unfortunate .239 BABIP. His strikeout-to-walk ratio is still highly impressive given his profile and the league context, and it’ll be nice to see him in at least a slightly less draconian environment for hitters at AA Tennessee next season.

Another from the ranks of “more fantasy than real life value,” DeShields had me highly intrigued as a guy with strong on-base skills and pure 80 grade speed. That kind of combination – the on-base guy with a plus speed profile – is one of the more sought-after in baseball, yet because there are often concerns about defensive viability and/or whether the guy will get the bat knocked out of his hands later in his career this particular profile can make real prospect evaluators hesitant to buy in. The window can be longer to snag these types in dynasty leagues before real world value perception starts to inflate at a rate consistent with fantasy value.

In the case of DeShields, questions about his future position or effort on the field didn’t have me worried, though in retrospect the latter issue may have been worth paying more attention to. In fairness, his AA season has been an awfully tough one to evaluate, as he took a fastball to the face in the middle of April and hasn’t seemed to quite recover from the shattered cheekbone that ensued. But the rough edges to his game don’t appear to be making many strides towards smoothing out. While he’s still managed to get on base at a very solid .343 clip on the year, his 23% strikeout rate and sub-.100 ISO suggest his stellar walk rate may be in for a strong test when Major League pitchers start attacking him with precision Major League stuff. Until that happens, however, DeShields will remain a dynasty league asset, as his stolen base efficiency has rebounded ten points to 84% this season after some stumbles in High-A last season.

Seen as a potential top five – and perhaps even a 1.1 – talent heading into his senior year at Indiana State, Manaea slipped to the Royals at 34 on account of a hip injury. Polished college lefties are one of my weak spots in fantasy baseball; they’re the one breed of pitching prospect I can actually be persuaded to invest in from time to time. And if I can find one with Manaea’s kind of ceiling and an injury discount, well…he will probably be mine. The window has stayed open a bit longer than some anticipated for Manaea after reports of him putting on dizzying shows on the back fields of spring training and into the first couple weeks of the season. Working with two pitches that project out to 65-70 grade in his fastball and slider, as well as a third in his change-up that has plus potential, Manaea drew praise for his mechanical repetition and command profile as well, and he looked like a surefire quick riser. Well the command hasn’t quite come along, and while he’s whiffing an impressive 28% of opposing hitters he’s also handing out free passes to over 12% of them. Throw in a wonky .351 BABIP, and his 4.19 ERA and unsightly 1.49 WHIP have kept that buy-low window propped open to this day. This is probably a case where the scouting should and will win out, however, albeit on a potentially longer path to the Majors. 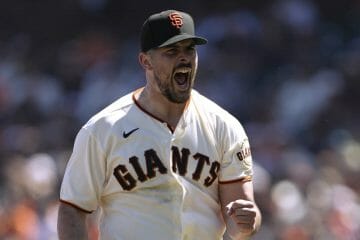