Up the Middle: Brandon Phillips

When I get bored, I like to look through the rosters and transaction logs of the teams that won some of my leagues. I found a common name this year in Brandon Phillips, whose 103 runs batted in surely helped a lot of teams even with the dropoff in steals. He went pretty high in redraft leagues, so it’s not like he was a steal or anything, it’s just that 100+ RBI from a middle infielder isn’t really par for the course and probably gave a lot of owners a nice little boost. Amid all of the recent talk of the Reds shopping Phillips hard this offseason, I couldn’t help but wonder what I would do with the 32-year-old second baseman if he was on my fantasy dynasty league roster. Despite the great season in 2013, and all of the consistently good numbers over the last few years with the Reds, I read this in the little ESPN player blurb about Phillips:

“This is bad news for those who own Phillips in dynasty leagues, as his value would drop significantly in a less potent lineup.”

I’m not sure it’s just the lineup that is going to hurt him if (or when) he gets moved. But I also think there is no reason to throw the baby out with the bathwater. Over the last 5 years, he’s been one of the top 5 or 6 second basemen in every standard roto category with the exception of batting average.

The bad news is that Phillips is now on the wrong side of 32 and that usually doesn’t bode well for second basemen. Dave Cameron wrote a great article at Fangraphs in 2011 that referenced the decline among players at the keystone position. But apart from his age, a new home ballpark could impact Phillips going forward as well. Phillips looks like Mr. Consistency in the home run department at first glance. He hit exactly 18 homers in each of the last four seasons. GABP is known to be a hitter’s park, but let’s look at the splits for the hell of it. Of the 72 home runs he’s hit over the last four years, 46 were in Cincinnati. In fact, in 2012 he hit 15 of his 18 homers there, and in 2011 he hit 14 of his 18 homers at GABP. Of course he could end up in a stadium that is every bit as hitter friendly, but with his speed most likely declining with his age, the power is going to be one of his better assets. Since 18 dingers isn’t exactly “elite” to begin with, he can’t afford to take a hit in that category too.

The good news is that Phillips is still going to provide value to fantasy owners over the next couple years and since we’re talking dynasty, we don’t necessarily have to be as concerned with his ADP or “overdrafting” a guy like Phillips next year. If you’ve owned him, you’ve probably loved the  steady production. He hasn’t played less than 140 games since 2005, so there’s no reason to believe he is just suddenly going to fall off a cliff in terms of his health. He’s also as safe a bet for 80 runs and 80 RBIs as you’ll find among veteran second basemen.

All in all, I’d take the trade hype with a grain of salt and not abandon ship yet if you’re a Phillips owner. Despite the favorable home run totals at home and the concern over a second baseman’s ability to stay healthy into his thirties, there’s no reason to think that Phillips can’t continue to be a dynamic, valuable player for a few more years and contribute to your fantasy team no matter where he lands. 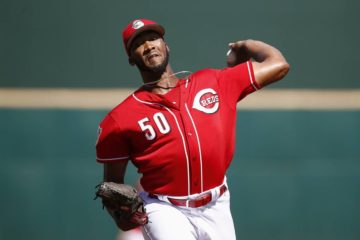 Amir Garrett: As Bad As I Thought He Was? Probably not. Still a bad pitcher? You Damn Right. Will I Ever Publicly Admit That? No. An article you shouldn’t read because who wants to roster Amir Garrett besides Patrick? PS I hate you Keaton. A TDG Freshtake

Up the Middle: Brandon Phillips