Keeper Conundrum: The Old and the Not-Quite-As-Beautiful

My colleague Andy Barnes and I share a soft spot for post-prime hitters, and last week he wrote a fine piece advocating for several of his favorites heading into next season. I agree wholeheartedly with the strategy; the old men of the game are boring names. They’ve been around forever, they’re not particularly exciting, and particularly in dynasty formats they often get overlooked despite consistently providing value over many years of play. But alas, in this particular case it’s my solemn duty to burst a couple bubbles with cautionary tales about the downside risk associated with keeping the old timers Andy highlighted. While veteran players are indeed generally undervalued as fantasy baseball commodities, they must be approached with caution when considering their value as keepers. So without further ado, let’s re-examine Victor Martinez, Carlos Beltran, and Aramis Ramirez as potential keepers for next season.

Victor Martinez has turned out to be one of the steals of the season for those owners who a) play in leagues where he retained catcher eligibility and b) were patient with him through his (not unexpected) early season struggles. After the slow start V-Mart has rebounded tremendously over the last couple months and now sits 6th among catchers on ESPN’s player rater. And he doesn’t appear to be doing anything currently that on the surface appears unsustainable. Sure, he’s chasing more balls out of the zone than he used to, and he’s developed a dramatic platoon split that makes him pretty much un-startable against left-handed pitching. But the real issues with Victor are two-fold: plummeting power and bygone position eligibility. His ISO on the season is .119, a career worst and over 40 points below his career average. And it unfortunately marks the continuation of a regression that began when he arrived in Detroit in 2011. He’s still getting on base, but he’s become a glorified singles hitter. And that’s all well and good, as singles hitters can be valuable under the right circumstances. But not when they are Utility-only players. V-Mart will lose his catcher eligibility after this season, and in all likelihood it’s going to be gone for good.

While he’ll probably be good for a decent enough batting average again next year, and he’ll get you some RBI’s hitting behind Cabrera and Fielder again, he’s not going to give you much power or any speed at all. The negative effect of this key point is multiplied when you factor in that he’ll be clogging up the one flex spot in your lineup where you should be looking to get production value in either or ideally both of those categories. Particularly in h2h leagues the ability to start speed and/or power guys in your utility slot as the situation dictates is a huge advantage, and V-Mart’s 2+ category skillset is restrictive in that capacity. Martinez is a nice player, but between his lack of production in crucial categories, his positional limitation, and the probability of at least some age-related decline he makes for a poor keep in most dynasty formats.

Carlos Beltran, meanwhile, is enjoying the latest stellar season in a career full of them. Andy’s piece does a nice job highlighting his consistency during a period (age 34-36) that players traditionally start to decline, and the value of that consistency cannot be overstated. But under the hood of this fantastic season there are some troubling signs for his expected value in 2014 and beyond. Most notably, he’s currently sporting an outlier line drive rate of 24.4%, a full 4% better than anything he’s posted in the last 5 years and 4.5% higher than his career rate. This has led to a 20 point boost to his career BABIP. As Andy noted, he’s also seen a complete collapse of his BB% to almost half his career rate this year. This is symptomatic of a troubling long-term trend in his pitch selection. Over the past five seasons his O-Swing % has gone from 21.7% to 25.7%, then 27.8%, 31.4%, and finally 32.4% this season. He’ll also be a free agent this off-season, and given the expected emergence of stud prospect Oscar Taveras in St. Louis he’s far from a good bet for a return engagement to hit at the top of the best lineup in the National League again.

It all adds up to a risky package for future investment. Now, even with likely regression on account of trend lines and age Beltran’s still a valuable player in a vacuum. He currently rates 17th on ESPN’s player rater among outfielders, good for 53rd overall. But that’s just the thing: outfield is an incredibly deep position. There are 34 outfielders in the top 100 of ESPN’s player rater, and there were 37 in 2012. Position scarcity again plays a central role here. Unless you’re in one of the deeper dynasty leagues in town the expected production for, say, the 30th rated outfielder is nothing that can’t be replaced pretty well via the draft. I’d likely end up holding on to Beltran in most dynasty formats if I had to, as a borderline top 100 player is still quite valuable. But not before aggressively shopping him this off-season.

And finally, we come to Aramis Ramirez, who has been a personal favorite of mine for a loooong time. He’s a notorious “second-half” hitter, with a career OPS seventy points higher in the second half of the season over almost 2,000 games of sample size. Guys with a nigh-on .900 OPS in the crucial fantasy months of August and September don’t grow on trees, and his seemingly inevitable slow starts have presented savvy owners with an annual buy-low opportunity around the all-star break if the right opponent rosters him out of spring training. But at this stage of Aramis’ career such a proposition becomes a lot more dicey. He’ll enter 2014 having played a sporadic half-season this year with some decidedly mixed and outlying results along the way – not surprising, given that ~300 plate appearances are a decidedly small sample size in a career of almost 8,000. But his LD% is down this year, and he is making slightly less contact than normal. Can we draw conclusions from that? No, probably not. But the reality is that gambling on older players to bounce back to previous levels of production the season after an injury year is a just that, a gamble. And in the particular case of a player like Ramirez, who infamously starts the year off slowly, the lack of a clear trend-line progression becomes that much more significant of an issue for predicting likely value. Given the talent invading the hot corner these days and Ramirez’ “reply hazy, try again later” profile I’d just as soon stay away in 2014 if I had any better options. He’s absolutely a rebound flyer, of course he is. But that’s really the exact kind of player you want to be targeting on draft day, not investing in as a keeper. 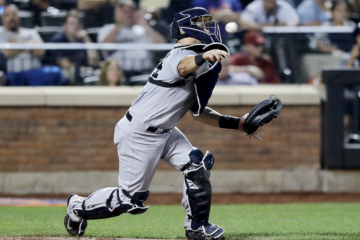 Keeper Conundrum: The Old and the Not-Quite-As-Beautiful