To Remake the (Once) Young Flier: When To Acquire “Sell-High” Targets

The decision process around whether to trade a prospect (or two) for established big leaguers can be one that owners lose sleep over. However, you can usually hang your hat on the fact that prospects are unproven and the established big leaguers are either in their prime or have an established baseline of performance. When the player you’re trading for is performing above expectations, but is still reasonably aged, you’re also buying the chance that this is a new baseline–like with Dexter Fowler or Chris Davis. And when that player is a little older, but has that baseline, you’re looking at buying more steady future performance, even if you know it won’t last forever–like Chase Utley. It’s when neither of those things are true that things start to get a little dicier.

However, sometimes the best deals you can make are ones where the market is dictating a run in the opposite direction. And they are often the best deals because the prices tend to be pretty low. You could be dealing with an owner who is rebuilding but had to grab a few veterans to fill out his active roster, and is now seeing that he could potentially get a return for one of these players. Or you could be dealing with a contending team who just doesn’t need this player on his/her active roster. Either way, here are five hitters who could potentially be had for a prospect you might not miss all that much in your dynasty league:

The first name on this list is a familiar one, but not one who was expected to be a top-20 overall fantasy player through five weeks of the season (which he has been). The most incredible thing about his season so far, isn’t the 10 homers or the 26 RBI, it’s the 23.1% strikeout rate. To put that in perspective, his previous career low for strikeout rate was last year’s 29.6%. To put it in further perspective, Reynolds is hitting .300 right now and his BABIP is below his career rate. Of course, he’s not quite as old as some of the other names on this list, or as far removed from real fantasy impact, but I just really wanted an excuse to talk about what he’s doing. I’ve been trying to trade for him in a few different leagues to no avail, but I really do think this party can continue all year long (to an extent). Remember all those years we talked ourselves into how valuable Reynolds could be if he could just hit .260 again? This may be that year.

With a .313 average and 9 steals through his first 27 games, McLouth is not turning back the clock, he’s forging a new one. After all, it’s not every day that a 31-year old outfielder is nearly halfway to his career high in stolen bases by Cinco de Mayo. Add to that sterling package, his 3 HR and incredible 16-10 K/BB rate and you’ve got one heck of a story emanating from a city which had it’s share of stories in 2012. Oh, and did I mention that he has a .411 OBP and 25 runs scored in 27 games? On top of all this, his underlying stats suggest that it’s completely legit. McLouth has always had low swinging strike rates, but so far this year, he has a 2.9% rate, which is just ridiculous. He’s also only swinging at 17.1% of pitches outside the strike zone, which is equally ridiculous.

Maybe it’s a coincidence that Wells’ two worst seasons in terms of BABIP (2011 and 2012) were also his two worst seasons in terms of walk rate. Now, he’s never been a prodigious walker, but his 8.5% rate so far in 2013 would be his highest since 2004. And despite the twists and turns his career has taken over the past two seasons, the one thing Wells never lost was his ability to hit for power, as he hit 36 HR in 208 games–all while hitting in one of the league’s most notorious homer-killing parks in baseball. There will be a little bit of a playing time crunch when Curtis Granderson returns, but as one of the few power bats in their lineup, the Yankees will be hard pressed to sit him too often. And that’s all assuming that Travis Hafner stays healthy. And speaking of Hafner…

Trade status: Worthy of a prospect outside the top 100

He makes this list too, due to the bounce back season he’s enjoying so far. Through Sunday’s games, Hafner’s OPS had just barely dropped below the gold standard to .999–with 6 HR and a .291 batting average. And if you’re in an OBP league, he’s been even better, as he’s getting on base more than 41% of the time. The issue with Hafner had always been (and continues to be) his health, but in 2012, he was a disappointment even when he was on the field. However, Hafner would certainly not be the first in a recent line of veteran left-handed hitters who has found playing in Yankee Stadium (with it’s short porch in right) to be something along the lines of the Fountain of Youth. There’s always the concern that he’ll break, but until he does, Hafner could be a very helpful player–especially in points leagues.

Trade status: Worthy of a prospect outside the top 100

It’s tough to be the unlikeliest member of this group, but I think we can all agree that Buck is just that. And while his story is great, if you’re in a mixed league that only uses one catcher, you can feel free to ignore the rest of this blurb. But if you play in a two-catcher format or an NL-only, Buck is someone who could likely be had for a reasonable price. He’s not going to hit 50 HR this year, but with Travis d’Arnaud still recovering from injury (and won’t be up in the majors for at least another two months), his playing time isn’t going anywhere. He could actually hit 25+ bombs before all is said and done this year. 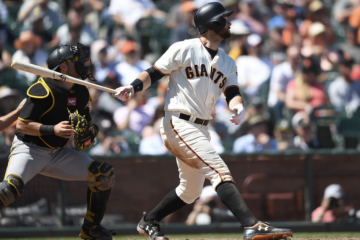 On Tony Cingrani and Being Stubborn

Back From The Dead: Upper Minors Edition

To Remake the (Once) Young Flier: When To Acquire “Sell-High” Targets