Using Minor League Stats to Your Advantage: A Quick Primer

Minor league stats are great for what they are — a piece of the overall prospect evaluation puzzle. However, many dynasty league owners can be tempted by gaudy numbers, leading to value displacement. And when there is value displacement, you can take advantage. After all, minor league stats can be greatly skewed by organizational philosophies. For instance, some major league clubs (as you may have heard with Dylan Bundy) have a pitching prospect scrap their best secondary offering in order to work on other pitches. Some hitters who have an aggressive approach may be asked to take the first pitch of every at bat in order for them to see more pitches (and vice versa, with more passive hitters). What we sometimes forget to remember is that the minor leagues are about development, not results.

To start the look into this, there are many different ways in which value displacement from statistics can materialize, and we’re going to go through the three major ones to look at (both on the positive and negative sides):

This one is pretty widely talked about, but usually focused on the extreme side. Like when prospect experts on Twitter shoot down the hopes that Phillies fans have for 26-year old minor league superstar Darin Ruf, who hit 38 HR for Double-A Reading this season. But, realistically, the other owners in your league are not climbing over each other to grab Ruf off waivers — we know better than that.

However, smaller nuances on the opposite side can give you an advantage. For instance, when you see an 18-year old in full season ball (Low-A or higher), raw numbers can be deceiving. Take Xander Bogaerts or Jurickson Profar from 2011. Neither of them put up league-leading totals anywhere across the board, but Bogaerts’ 16 HR and .509 SLG, given his age and experience, may have been one of the most impressive power displays in the minors. Same for Profar’s .390 OBP and 65-63 K/BB rate (well, that’s not a power display but you know what I mean). Because of how impressive these feats were (in addition to their further impressive feats in 2012), it is not much of a surprise to prospect junkies that they will both be top-10 dynasty league prospects heading into 2013.

More after the jump…

This one is a little dangerous because it’s so easy to spot and can sometimes be difficult to provide context for. The example that I keep going back to is Brett Jackson of the Cubs. If you looked at his Triple-A line from 2011 — yes it was very impressive that he hit .297/.388/.551 with 10 HR and 6 SB in 185 AB, but his scouting report and underlying numbers did not support this type of hitter. Jackson was often described as a bag o’ fives coming up through the Cubs system, meaning he had all five tools, but none were above average (5). So when you see a 30% strikeout rate from a 23-year old who doesn’t project to have 30 HR power at the major league level, that’s a bad sign.

But again, context is important. Jackson was a college hitter out of a big-time program (Cal), not a raw athlete drafted out of high school. I don’t mean to sound like a broken record, but this is prospect-specific and needs to fit into the context of the scouting report. When a prospect strikes out in more than a quarter of his plate appearances, you should at least take note. If it’s more than 30% (like Jackson did this year in AAA), it’s a red flag. Contact issues don’t just cause batting average to suffer, but it deflates the potential of almost every other stat at the highest level.

Another piece of the puzzle you need to be aware of is how the league that the prospect you’re looking at plays overall in terms of offense. For example, a 20 HR season in the Florida State League is extremely different than a 20 HR season in the California League — even though they are both High-A affiliates. What that 20 HR number doesn’t tell you is that the Florida State League is played mostly in spring training parks with huge dimensions (and high humidity), while the Cal League is played in bandboxes, often in high altitude. The Pacific Coast League is another one to discount power numbers a bit, especially in the Southern division.

There are going to be many individual prospect pieces in the off-season focusing on players whose trade value is out of line with his statistical performance, both on the positive and negative sides. So look for those starting in October. If you’re confident in your ability to value prospects, the best time to strike is before the “big three” prospect lists come out (KLaw, BA, BP) — as the owners who rely solely on a combination of those lists can be vulnerable. I’ll do my best to inform as much as I can in that interim.

Getting Your Guy, or Trading for Aaron Nola 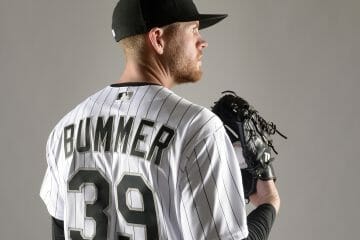 Clay Blackburn, a Prospect After My Own Heart

Using Minor League Stats to Your Advantage: A Quick Primer