What To Do About Colby Rasmus

There have been few players in the past decade or so that have seen the dramatic landscape shifts to their value as Colby Rasmus has. He’s been a bust, a sleeper, a breakout player, a post-hype sleeper, a bad clubhouse guy, a change of scenery guy, a bust again, a breakout player again and (right now) a man who apparently makes very bad decisions. And for a player who has had just one season of above league average production (he had a 129 wRC+ in 2010), Rasmus still generates a very high word count from fantasy prognosticators. Now that he’s 26 years old, most of these words have changed from the “what this guy could be” variety to “what in the world is this guy?”

So, what in the world is this guy? At this point, he’s a career .245/.315/.428 hitter with 74 HR, 24 SB and a 0.39 BB/K rate in 547 games – but that doesn’t begin to tell the story. Rasmus is now at the point in his career that many former top prospects have found themselves – neither here, nor there. Lest we forget how good of a prospect Rasmus was, here’s what Kevin Goldstein said about him in February of 2008:

“On a pure tools level, Rasmus is an absolute monster. He added a good 10-15 pounds of solid muscle prior to the season, and it clearly paid off, as he added strength to what was already an extremely quick bat. He has excellent pitch recognition and a patient approach, and his plus speed makes him dangerous both on the basepaths and in the field, where he also has a very good arm.”

He was certainly not alone, as before the 2008 season, Rasmus was a top-10 prospect across the board — #5 at Baseball America, #5 at ESPN (Keith Law) and #8 at Baseball Prospectus. In fact, that made Goldstein the low man on the totem pole. The high expectations of Rasmus from his days as a prospect made his breakout 2010 season seem like the start of what would be a star-level career. But that never happened. We all know the story of his clashes with the coaching staff in St. Louis during the 2011 season which led to his exile to Toronto, but it was still believed by many that a change of scenery would spark his eventual stardom. Instead, he struggled mightily the last two months of 2011 and people were jumping off the bandwagon left and right.

Expectations were relatively low heading into 2012, but Rasmus surprised many with a strong first half of the season. People began to slowly buy back into the change of scenery theory (myself included). In June, Rasmus hit 8 HR and had an 878 OPS – this is what we were expecting to see in 2011. But then as the weather really heated up, the wheels came off and we were back to wondering who this guy was again. Here are the numbers through September 4th:

More often than not, the realist will be right. Prospects, even consensus top-10 prospects, fail. But the optimist will say that he has the underlying talent to make the adjustments necessary to succeed at the major league level. The optimist will quote Ron Shandler ("once you display a skill, you own it"). The optimist will say that his extreme August struggles (508 OPS in 84 AB) were at least partially from Rasmus trying to play through a groin strain which he first suffered on August 4th. And the optimist might even point out that Adrian Beltre was a top-10 prospect who, at the end of the 2003 season (he was 24), was a career .262/.320/.428 hitter with 99 HR, 55 SB and a 0.46 BB/K rate in 810 games – very similar numbers to what Rasmus has done. Then he broke out in 2004 and became the Adrian Beltre we know today.

The harsh reality is that whichever side of the argument you fall on, his price tag to find out in 2013 may be as low as it’s been since he arrived in the majors. And I, for one, am going to be one of the owners who takes that chance. If the opportunity is there, I will roster Rasmus as my 4th/5th OF in mixed leagues because his upside is well worth the cost of acquiring him. It’s also a vote of confidence in Toronto’s coaching staff, who (if you hadn’t noticed) have been doing a great job getting the most out of their power hitters. A .260-.270 batting average and 25-30 HR are still attainable in 2013 and beyond. Plus, if he continues to hit second in the Blue Jays lineup, more counting stats should follow. I will be curious where he falls in some of the consensus rankings once the spring approaches, but for the first time in his career, Rasmus may be undervalued in fantasy drafts. If you can acquire him in your dynasty league for pieces you won’t miss too much, go for it. You don’t win leagues by not taking some chances, and Rasmus is a chance worth taking. 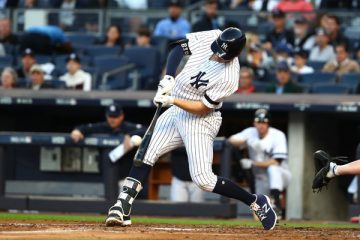 Clay Blackburn, a Prospect After My Own Heart

What To Do About Colby Rasmus