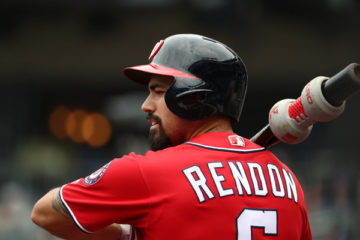 A CONCLUSION Welcome to the last installment of The Dynasty Guru’s Triple Play! This is a series where three of the Dynasty Guru’s nerdier baseball writers – Adam Lawler, Patrick Magnus, and Keaton O. DeRocher- brought to you a succinct analysis of a pitcher, a hitter and a prospect from

No one was more skeptical of Daniel Murphy than I. Of course, I usually am slow to accept unexpected breakouts. The owner of Murphy in my dynasty league is well on his way to a last place finish and had been shopping Murphy all year. I have Jason Kipnis and

Is The Bryce Finally Right?

Mike Trout and Bryce Harper are two of only six players in MLB history to hit 50 homeruns and steal 30 bases through age 21. That is where the similarities end between the two generational talents. Both enter the 2015 campaign coming off the “worst” seasons of their young careers,

Up the Middle: Anthony Rendon

This will be the last Up the Middle post for a bit as the much anticipated dynasty rankings will be coming out shortly. We’ve talked about a bunch of good middle infielders in these posts, including both prospects and major leaguers. This week we’ll take a look at a second baseman

With the Winter Meetings a little less than a week away (Dec. 9-12), baseball’s hot stove wasted no time cranking up the heat; numerous free-agent deals of the big and small variety have already been agreed upon, and a trade no one saw coming–possibly including one of the two teams

The Waiting: Aces, Ceilings and Floors

I was really happy to see that Wilson had written about Zach Lee, because he had been on my mind lately and Wilson basically saved me 500 words to say much the same thing. I like Lee and I agree that boring can be beautiful. What got me thinking about

Read More
Craig Goldstein
UncategorizedWhat To Do About...

When we think of bouncing back, it’s usually a talented player who underperformed the previous year and will bounce back in a good way. In Ian Desmond’s case however, I’m going to be liberal with the category and use it more as a “regression candidate” heading and say he’s going