When scouting the statline for the next big prospect, age might be the most important column to pay attention to. Every year, there are older minor leaguers who put up eye-popping stats but never pan out in the long run. That’s not to say you shouldn’t consider a prospect valuable if he’s slightly old for the level, but age plays an important role when judging a player’s performance. More often than not, if a team gives a prospect an aggressive assignment, it’s worth taking note of in your dynasty leagues. Here are five examples of prospects age-19 or younger who had excellent seasons in 2016, and very well might have flown under the radar in your league.

This is Part III in the Teens Who Rake series. Here are links to the first and second installments.

Jesus Sanchez, OF, Tampa Bay Rays
Sanchez reached the Appalachian League before his 19th birthday, putting him on a short list of hitters this year. While it was only 53 plate appearances, his .347/.385/.612 triple-slash jumps off the page among Rookie ball leaders. After posting a 143 wRC+ in the Dominican Summer League (DSL) as a 17-year-old, Sanchez made his stateside debut in 2016 and hasn’t looked back. Hitting a crisp .323/.341/.530 in the Gulf Coast League (GCL) to start the year, Sanchez finished the season with a combined seven home runs and two stolen bases in 226 plate appearances. Listed at 6-foot-2, 185 pounds, the left-handed hitting outfielder has the size to back up the power numbers and an advanced feel for the barrel. While speed isn’t a big part of his game at the moment, he hit eight triples in just 42 games in the GCL, signaling his stolen base potential could improve as he develops as a baserunner. Landing on multiple industry top-10’s this winter, Sanchez’s stock is pointing straight up. While there’s some hesitation given his low walk rates, he seems to be a pure hitter with potential to hit for average or better power in the future. If you’re looking to restock your system, Sanchez is a great place to start.

Fernando Tatis Jr, INF, San Diego Padres
A mature body with big league bloodlines, Tatis is the son of the only player in baseball history to hit two grand slams in the same inning. Born on January 2nd, 1999, Tatis is one of the first players to truly make me feel old. Acquired by San Diego as the centerpiece in the trade that brought James Shields to the south side of Chicago this summer, Tatis never actually played an official game with the White Sox organization. Starting his career off with the Arizona League (AZL) Padres, the 6-foot-3 shortstop stands little chance of sticking at the premium position for long, but has the glove to play third base or second base and the athleticism to make it work in the outfield if need be. Despite being a month away from his 18th birthday, Tatis hit four home runs and stole 14 bases in under 200 plate appearances for the Arizona League (AZL) Padres before earning a promotion to the low-A Northwest League. Hitting precisely .273 at both levels, Tatis didn’t show much patience at the plate, but he flashed some pop and some speed, despite being the youngest player in the Northwest League. Based on his big league frame and big league name, Tatis makes a quality speculative add in relatively deep leagues. If you also factor in the feel for hitting and an intriguing mix of power and speed, and you’ve got yourself a prospect who could gain significant helium in the next twelve months.

Eguy Rosario, 2B/3B, San Diego Padres
Just when you thought Tatis made you feel old, I present you Eguy Rosario, an infielder who made his American pro debut as a 16-year-old. After posting a .341 average in over 200 plate appearances in the Dominican, Rosario went 11-for-29 with three doubles in the AZL, good for a .379 average. He lacks the pure upside of others on this list, but he’s also the youngest by a matter of more than half a year. He stole 21 bases on 30 attempts in the DSL, though runners with any semblance of speed often run wild in the league, so take that with a grain of salt. Rosario’s too far away and doesn’t quite have the upside to warrant scrambling to acquire in your league just yet, but he was the equivalent of a high school junior this year and more than held his own in a league with an average age nearly four years his senior. With a first name pronounced ‘Eggy’, this young Friar is certainly a kid to keep an eye on.

Keibert Ruiz, C, Los Angeles Dodgers
One of the most promising 18-year-olds in professional baseball, Ruiz lasted just eight games in the AZL before his .485 batting average forced him into a promotion. It’s especially noteworthy given he’s a catcher, and organizations will often hold their players in lower levels regardless of how well they’re hitting, for the sole purpose of developing them behind the plate. Ranking number 13 on the Dodgers’ prospect list over at FanGraphs, Eric Longenhagen had plenty of positive things to say about the young Venezuelan’s glovework. While reaching the advanced-Rookie Pioneer league shortly after his 18th birthday is impressive enough, Ruiz simply shined for the Ogden Raptors. Hitting .354/.393/.503, good for a 126 wRC+ in a league in which he was three and a half years younger than the average player, Ruiz has put himself squarely on the prospect map. While he hit just two home runs across nearly 250 plate appearances, and posted a goose egg in the stole base department, Ruiz’s combination of defense and hitting ability make him a very worthwhile add in deeper leagues.

Colton Welker, 3B, Colorado Rockies
In order to give some credit to the American amateur baseball system, here’s a 2016 fourth-rounder out of a Florida high school. The Rockies are the only organization in baseball to not utilize a complex-level rookie ball team (AZL or GCL), despite having some of the finest spring training facilities in Arizona. Given that, Welker was assigned directly to the Pioneer League fresh out of high school, where he posted a pretty flashy .329/.366/.490 triple-slash. Given the hitter-friendly nature of the Pioneer League, it was good for only a 114 wRC+, but he was over two years below the average age for the league. The .329 average is particularly intriguing when combined with the moderate power/speed combination he flashed — five home runs, six stolen bases — across 51 games. His profile is considerably more valuable at the hot corner, but reports are already coming out that he might find himself relegated to first base sooner than later. However, Nolan Arenado once received similar remarks in the lower minors, but put in an extensive amount of work to become the elite defender he is today. While it would be daft to expect a similar transformation from Welker, being around Arenado next spring could do wonders for him as an overall player. While he’s still years away from even projecting as a big leaguer, a quality pro debut and future home of Mile High makes Welker a very intriguing flier at the end of your league’s new player draft. 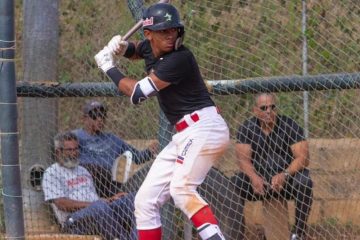 42.6k Views By The Dynasty Guru

Join The Ranks Episode 13: Breakouts and A Tight Package

Hi, I donated to unlock the baseball spreadsheet projections, but lost my link and cannot find an email as a backup. Is there a way to get connected again? Thank…