Every week on Fridays, our writers here at The Dynasty Guru will be bringing you some quick hit musings about a particular topic so you, the reader, can get a blast of info from a bunch of different writers with some passionate opinions. This week’s roundtable topic is hot starts

In this episode Keaton, Shelly, and Jordan catch up on the latest news from around the league and discuss some guys they’re buying and selling. Outtro: Lazy Eye by Silversun Pickups 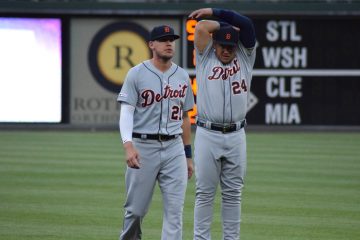 For an explanation of league rules, see the introductory post. We have two weeks of Way Too Deep FAAB to catch up on. The theme so far in June has been young starting pitching. Teams are starting to call up their young breakout starting pitchers. Many of these pitchers are

Over the last several weeks, we have identified catchers, first basemen, and second basemen who have the potential to contribute to three or more hitting categories. Today we continue our quest to build a balanced team and turn to the third basemen and shortstops. As a reminder on the methodology

Keeper deadlines have passed, spring training games have begun, and fantasy owners are in the thick of draft season.  Over the last couple weeks I’ve taken a look at some catcher and second base prospects who are probably unowned in your league but who are worthy of watching in spring

It’s been a while since we took a look at some lesser known prospects around the league, that should be pertinent to mid- and deep-leaguers. It’s likely that for those in deep leagues, some of these guys will be owned, but for others they’re names to keep track of as