While some players are fighting for divisions and pennants, many valuable fantasy baseball assets are playing on teams where even the beer can’t chase their blues away. With the trade deadline less than two months away, many of these assets will be wearing new colors come August, but will a 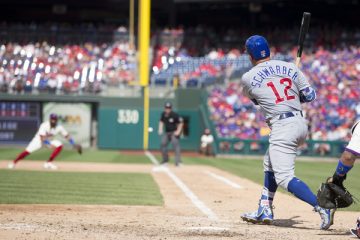 If you are laying eyes on this baseball article – or if you have a pulse – you probably know the Cubs won the World Series this year. It was said many times this past year that the Cubs are the best team in baseball. It was true on paper

The fantasy landscape is changing dramatically at the shortstop position in dynasty leagues. If you blink, you might miss the changing of the guard. The dramatic overhaul at the top of the position is already underway with Chicago Cubs top prospect Addison Russell completing his meteoric rise to The Show earlier this

Kyle Schwarber and the Value of Catching Prospects

Much has been made about the fact that Chicago Cubs 2014 first round draft pick Kyle Schwarber might not stick behind the plate and could ultimately be moved to outfield full time. How is this going to affect the slugger’s fantasy value? Should we move him down the rankings if he is

One of the more important positions to fill in your fantasy lineup is, of course, first base. We all know this. It’s an offense-first (and specifically a power-first) position, with 7 of the top 25 hitters in 2013 per ESPN’s player rater holding eligibility. In an era of declining offensive

Read More
Ben Carsley
Dynasty DynamicsProspect TalkUncategorizedWhat To Do About...

Mike Olt has had a really crappy 2013 season. After crushing Double-A pitching in 2012 and shooting through the minors to earn a cup of MLB coffee, Olt began this year as a victim of the Rangers’ offensive depth. Blocked at his natural position by Adrian Beltre and also behind