Continuing with our highlights of the league’s top Third Basemen, as judged by our collection of industry experts, below are the TOP 10!!!!

If you didn’t know what Jose Ramirez did for a living, you wouldn’t have guessed he was a professional athlete, but man, can he play baseball! He hits for average and power, runs, fields and plays multiple positions. J-Ram’s Statcast page is beautiful; he does everything at a high level. His zone contact is consistently above 90% and while he doesn’t crush the ball like other players on this list, he impacts the baseball enough that his line drives (24.6% in 2022) turn into hits. He hits all pitches; the pitch he “struggles” with most is the slider (.500 SLG, +2 run value). A few minor things to monitor: last season his chase rate crept up, (28.7%), and his barrel rate dropped (6.6% compared with 11.1% in 2021). All told, J-Ram is a top 5 dynasty player, his power/speed profile will greatly help your dynasty roster. (Greg Hoogkamp)

Austin Riley is your prototypical third baseman, he’s big and strong, hits the ball hard, and plays solid defense. Riley followed up his career year 2021 with an even stronger campaign in 2022. He had career highs in barrel rate (15.7%), average exit velocity (92.5 mph), max exit velocity (115.9 mph), wOBA (.377), and hard-hit percentage (50.8%). On top of these improvements, Riley has also increased his zone contact rate to 81.3% and lowered his chase rate to 30.1%. These are both slightly below league average but moving in the right direction which will only elevate Riley’s overall numbers. He`s able to hit all pitches hard and has relatively few holes in his swing for his size. He doesn’t run, so this caps his upside, but he is elite at everything else and improving; this is why he is #2 on our 3B list. (Greg Hoogkamp)

Upon first glance, it appears that Rafael Devers had a down season last year. In reality, his skills were just as good, if not better than his monster 2021 season. Despite a decrease in counting stats, Devers improved his average exit velocity and zone contact rate while cutting his K rate. Devers is now the focal point of a Boston lineup that no longer includes names like Betts, Bogaerts, Benintendi, and Martinez. He may not get as many good pitches to hit going forward, which makes his plate discipline crucial. Devers chases pitches outside the zone at a 36.2% rate which is in the bottom 11% of the league. If this continues, his skills gains may disappear. Overall, he’s a very talented player that is still improving but realistically, he will have to do most of the heavy lifting himself now as enters his new 11-year contract. (Greg Hoogkamp)

One of the most consistent players, Machado had another top-notch season for the Padres in 2022. He eclipsed the 30 HR mark (6th time) and the 100 RBI mark (3rd time) while hitting .298. A deeper dive shows that the 30-year-old may have reached his peak and has lost some of the elite skills he once possessed. The most dramatic difference in his profile is his ability to hit the fastball. He had a .305 wOBA with a 24.3% whiff rate on 4-seamers, by far his worst performance against the pitch. His zone contact rate (82.3%) and chase rate (30.7%) were also career worsts. Don’t get me wrong, he still hits the ball extremely hard and has several great seasons ahead in a stacked Padres lineup, but do not expect his production to improve at this point in his career. (Greg Hoogkamp)

The Cardinals stole Arenado from the Rockies in an infamous trade and he has carried on doing damage in St. Louis. While he may not put up video game numbers like he did while in Rockies purple, he’s still a top dynasty option at the hot corner. It wasn’t obvious on the surface, but Arenado had actually posted skill declines in both 2020 and 2021. It was mainly a drop in power which could have been due to playing through injury or just getting older. He reversed the trend in 2022 and barreled up more pitches (8.2%) than he had since 2017. He also had his highest max exit velocity (111.4) and highest hard-hit rate since 2018 (38.9%). He has always had elite plate discipline and contact skills and if he can maintain his power gains, we will see several more .290/30/100 type seasons. (Greg Hoogkamp)

Is this the beginning of a dynasty-type run for the Baltimore Orioles? Their farm is locked and loaded and Henderson is one of the key pieces the O’s are counting on to step up and lead the organization forward. After rocketing up prospect lists all of last year with his dominance in the minors, he debuted on August 31st and had good success. He has great discipline at the plate, as evidenced by his double-digit walk rates throughout his minor league career. In his brief, 132 plate appearance stint in Baltimore, Henderson showed good power (9.8% barrel rate), speed (91st percentile) and versatility (2B/3B/SS). He also showed some areas in which he needs to improve (ground ball rate above 50%, sub-.300 wOBA on offspeed pitches, and sub-80% zone contact). There is a lot of untapped potential here, but there will also be growing pains.  (Greg Hoogkamp)

Alex Bregman is an extremely disciplined and smart hitter who has groomed his swing to his home ballpark. He has always been in the middle of the pack when it comes to exit velocities and hard-hit rates, but he puts the ball in play at an elite level and uses the Crawford boxes to his advantage better than anyone. His zone contact is consistently above 90% and he has had a sub-19 % chase rate for the last 5 seasons. Bregman piles up the walks and consequently will score a bunch of runs batting in front of a very strong Astros lineup. He won’t steal you any bases, but he is as dependable a hitter as they come. 2019 may not happen again, but a .360 OBP with 30 HR is still a strong possibility for the next few seasons. (Greg Hoogkamp)

Walker may not be on this list for much longer with a 5-time Silver Slugger/10-time Gold Glove stalwart in front of him on the third base depth chart. He began a transition to the outfield beginning in early August and there’s not much left for him to learn in the minor leagues. Walker is extremely athletic with tremendous bat speed and power to all fields. Something clicked for him last season as he increased his walk rate, contact rate, and hard-hit rate while decreasing his strikeout rate, all in significant ways. Walker can run a little as well, posting 22 steals in 2022; as he ages, the steals will probably start to dry up. There is some swing-and-miss in his game which will be an opportunity for him. Walker is an exciting player and is just about ready to show his skills at the highest level. (Greg Hoogkamp)

The future of the third base position is in good hands and a big reason why this is the case is Josh Jung will be a member of this top ten list for years to come. Jung suffered a torn labrum in his left shoulder during spring training and was expected to miss the entire 2022 season. Amazingly, he made his major league debut on September 9th after a minor league rehab and was able to accumulate 102 plate appearances. He had mixed results, striking out 38.2% of the time, but he did slug 5 home runs and steal 2 bases. Jung hits the ball extremely hard and should top 30 HR on a regular basis for the Rangers once he gets acclimated. If he can get back to his minor league contact numbers, he will live up to the top prospect hype. (Greg Hoogkamp)

Vargas has quietly moved his way up the Dodgers system in 2023 and is set to take over at third base with the departure of fan-favorite Justin Turner. Vargas has a plus hit tool and elite plate approach; he put up a .304/.404/.511 line at Triple-A in 520 plate appearances this season. He was promoted to the Dodgers in September, but played sparingly and couldn’t get into a groove (.170/.200/.255 in 50 PA). Vargas can run a little and should chip in double-digit steals early in his career. He may be a little overlooked in some leagues based on his lackluster debut and quiet ascension within the system; take advantage and add him where you can as he could end up being a superstar. (Greg Hoogkamp) 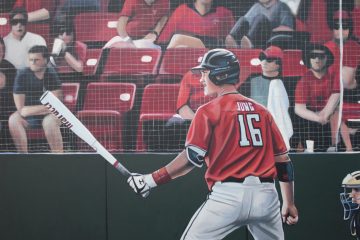