Every year, we at the TDG office identify Risers and Fallers from our consensus rankings. But how did we get here!? And what’s real and what’s noise? Well, the Gurus are here to help. In each “Risers and Fallers” article, the Gurus will take you on an explanatory journey as to why four players have seen a fortunate rise or an unfortunate turn toward their demise. Thanks for reading!

Josh sees himself rising a couple of spots inside the top ten. As a Rangers fan in real life, I am excited to see Jung in a full season. Last year in Triple-A, Jung hit six home runs in 23 games, and he is already being projected to hit over 20 bombs this season. There is a lot of hype surrounding this guy and I am all in on it. I will just say one thing about this, though. Be patient and realistic. Just because Jung is in the top ten doesn’t mean that he is going to be a star third baseman on day one. We are talking dynasty. Jung will more than likely have his struggles this season (I hope not personally), but let’s just be patient with the expectations. Lastly, Jung needs to improve his walk rate. Being able to stay in these top ten means that you are able to get on base with the best of them, so patience at the plate is a must.

Over the last three seasons combined (486 games), Rendon has played in 157 games total, or less than a full season. This is why he is falling. The guy cannot stay healthy. Rendon hasn’t been the same player in Los Angeles that he was in Washington, and most of that is due to health. Rendon has seen his batting average and on-base percentage decline since the days he played in Washington, but even in the last three injury-riddled seasons he was able to walk enough to have a pretty solid on-base percentage (but still about 70 points lower than the good old days in Washington, due to a worse batting average). Here is the bottom line. If Rendon can stay healthy, maybe he jumps a few spots, but I am not counting on it. I am out on Rendon in dynasty but I might take a flier on him if I played in a redraft league.

It took a little while to get here, but José Miranda finally broke into the big leagues in 2022. He was signed out of Puerto Rico back all the way back in 2016 and made a steady rise through the Twins system. Not known for his speed or defense, Miranda is a pure hitter who can provide both average and power and will hold down the hot corner for Minnesota in 2023. Like most rookies, he took a little while to adjust, but once he did, he showed why he belongs. In the second half, Miranda slashed .280/.347/.412 with a 6.6% BB rate and an 18.6% K rate; a very solid conclusion to his season. In addition, he slugged 15 homers and chipped in 25 doubles in 483 plate appearances. He posted a strong zone contact rate of 85.2%, but did chase at a 32.7% clip, something he will need to reign in. You can expect Miranda to be a steady contributor in 4 categories and be especially good in the batting average department; he’s a great add in dynasty right now.

Scouting is nowhere near an exact science – of this, I am sure. When the Blue Jays selected Groshans in the first round of the 2018 draft, the only question on him was if he could stick at shortstop.

Billed as an advanced bat for his age with eye-popping power, Groshans has yet to put it all together. Injuries have certainly played a role in his development as well as the lost season for minor leaguers that was 2020 as he has never gotten a full season`s worth of at-bats. He has almost always been young for his level as he is still only 23 years old when he got his cup of coffee in the majors after the trade to Miami in the latter half of the season. Groshans`s story isn’t written in stone by any means but this seems to be a make-or-break year for him.

It appears Jordan has a good eye at the plate having a walk percentage that has hovered in the teens in the minors but it seems to be more of an ambivalence to take the bat off his shoulder as he had a 64.2 zone swing percentage in his brief stint in the majors. The power has never quite materialized as an ISO of .158 in 2021 is his high water mark and that was good for only 7 home runs in a little over 300 at-bats in Double-A.

Groshans does move to a team where he should be able to get some regular playing time in the Majors and might be able to carve out a spot on the Marlins, but as fantasy players, I would recommend staying far away from him. 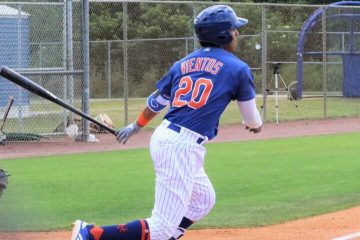