In dynasty leagues, information asymmetry leads to opportunity. Having the right information before the competition is how you gain an advantage. In this series, we highlight interesting high rising prospects, from the well-known to the lesser-known, based on our peak projections.  Our approach is based entirely on statistical and trend analysis and we have developed an assortment of tools that can help you make dynasty baseball decisions.

Click here to view the full lists & leaderboards at scoutthestatline.com!

Now you will find more than just our predictive models as StS moves into more player analysis!

Welcome to the final player highlights article of the year. It’s been a glorious season, and while there are still a few games left, most of the movement up and down the rankings has taken place! Stay vigilant, however, and always remember, dynasties are built in the offseason!

A catcher with the Pirates hailing from the Dominican Republic, there are few players that can claim to rival the strong finish that Endy Rodriguez has had to 2022. Rodriguez’s trajectory is pointing straight up. He has improved as he has moved up through all three levels he has played at on the season. Feast your eyes on these numbers:

The 22 year old is moving up to the very top of the list of an extremely talented crop of catching prospects. If you missed your opportunity with some of the other big names, don’t miss out on the chance to land Endy Rodriguez before he enters everyone’s top 5 at the position. He ranks  #12 on our 2022-only Board and #29 overall! 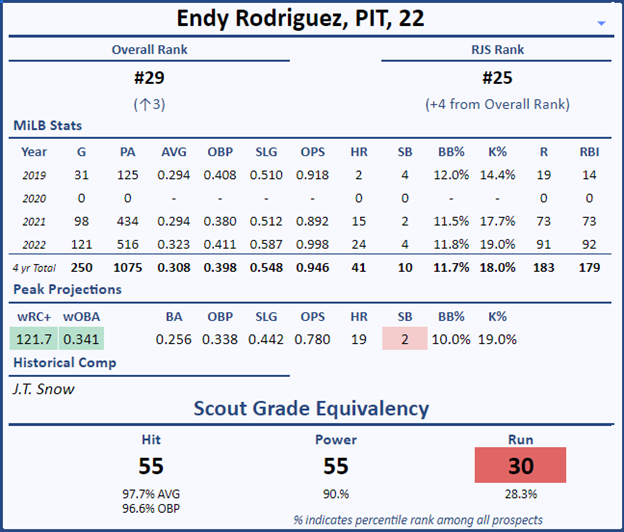 Another native of the Dominican Republic, the 19 year old Caminero has joined the upper echelon of the Rays’ strong farm system. Caminero boasts solid power with 11 home runs in 271 2022 plate appearances, paired with 12 stolen bases at a premium position. He is one of the more intriguing teenage prospects to crop up in the second half of the season, along with Zavala, Bleis, and Hector Rodriguez, who were all written up in my last player highlights article. 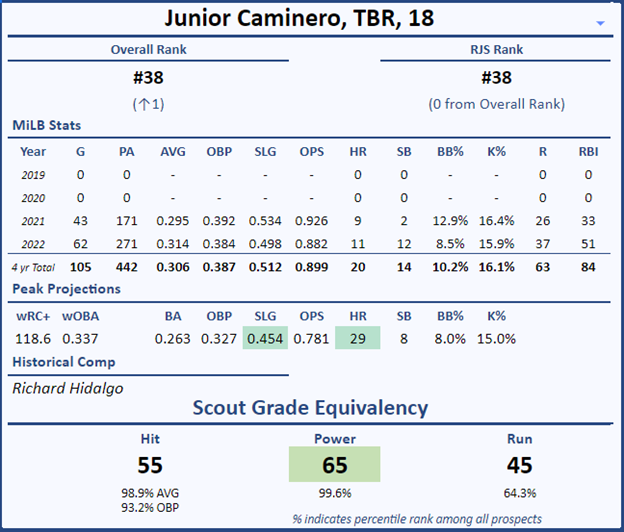 Another third base prospect, the 23 year old Yankees prospect has flashed quite a bit of power all season long, particularly on the back end. Chaparro has pushed his OPS on the season up to .962. At 23 years old, Chaparro isn’t particularly young for Double-A and only ranks #147 on our Top Projected Prospects list due to a questionable track record. However, he fares much better in our 2022-only list, where he comes in at #27. His trajectory has been moving in the right direction, so I’m buying this breakout. Chaparro is an interesting prospect to watch for a 2023 callup, and if he has a hot start to 2023, he will be a must add for medium-depth dynasty leagues. 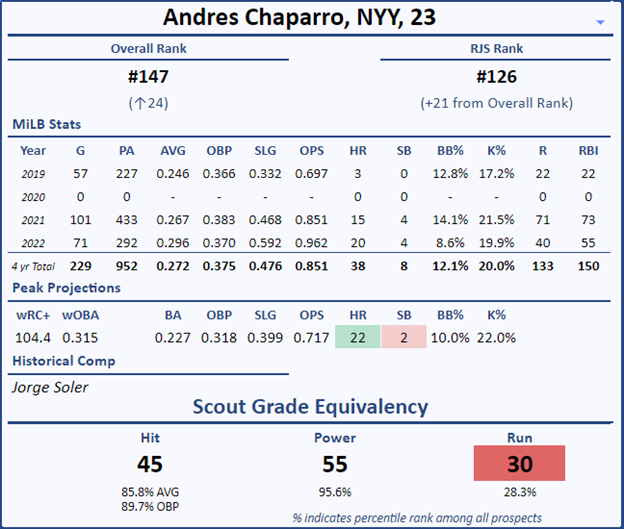 To this point, the Cubs second base prospect out of Venezuela has been a hitting machine, boasting a .338 career batting average. In 2022, Ramirez largely validated his strong results from the DSL last season, posting an .869 OPS and flashing solid speed (15 stolen bases) across 209 plate appearances. Ramirez sports solid strikeout rates and projects for high average. He’s a potential breakout player to watch for 2023! 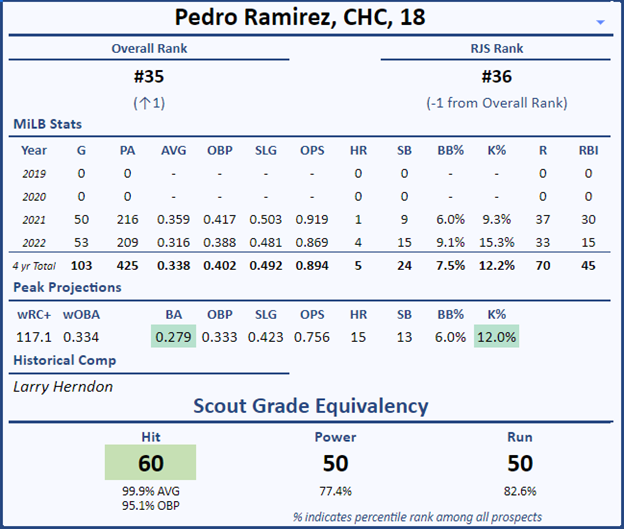 The second Zavala that I have highlighted this season after Samuel (no relation), this Zavala is four years older but also closer to the Major Leagues. Zavala has put together an impressive all-around season, with 16 home runs, 14 stolen bases, and solid walk and strikeout rates (17.5 and 21%, respectively). Zavala sports strong hitting skills and an impressive track record dating back to his days as an Oregon Duck. Ultimately, however, I see more of an MLB regular than an MLB star. 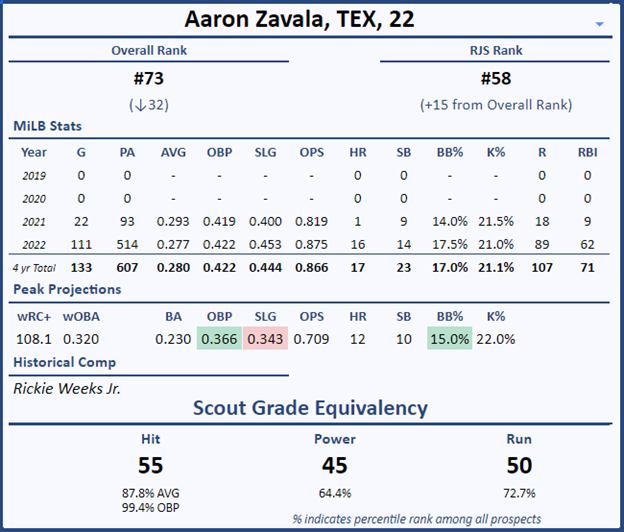 Frizzell is one of the most interesting prospects I think I have ever highlighted. For starters, I don’t believe I’ve ever written about a true DH at this level. And while I don’t have any details on Frizzell’s defense, one must surmise that it is downright terrible considering it is his primary position. The bat, on the other hand, demands your attention. While he didn’t qualify for our last Top Prospects list (which is why he does not have a detail below), Frizzell has been wrecking the low minors with an aggregate .388/.449/.671 slash line across the Rookie and Single-A levels. At 23, the lumbering 6’5 masher is old for the low minors, but the eye-popping numbers have propelled him all the way up to #2 on our 2022-only Board. I’m keeping an eye on him for now.