The Detroit Tigers are seven years into a three-year rebuild, and they have the failed prospects to prospects. I would list out the disappointing trade returns and poor draft picks, but that would put me well over my word count limit. Easily the team’s best trade acquisition in the last several years came from shipping a lefty relief specialist to the Cubs, Justin Wilson, for minor league third baseman Jeimer Candelario at the 2017 trade deadline. The Candy Man got fans excited by hitting .326 in 104 September at-bats that year, and it felt like they had a solid bat to build around who was ready right away. I’m not so sure that this foundation would pass inspection today, though.

Jeimer (pronounced JAY-mer) came to the Tigers with a highly touted hit tool. He hit a combined .283 in a full season in 2016 split between Double-A and Triple-A before being dealt the following summer. And that month-long audition to close out 2017 did nothing to tarnish his reputation. The following two seasons, though, did plenty to squander the faith he had earned. In 2018, his average dropped all the way down to .224. He managed to hit 19 home runs, a seemingly positive step towards an otherwise lagging power projection. In 2019, things got even worse as his average plummeted to just .203 across 94 games. Again, though, he offered something positive in that he hit for a .320 average and nine home runs in just 178 at-bats in Triple-A that year, spanning a couple of demotions and an injury rehab assignment.

In 2020 and 2021, Candelario seemed to put it all together. He hit .297 and then .271 in those seasons, with a combined 123 wRC+ in 201 games. His power output was acceptable at nearly 19 home runs per 162 games during that span. His turnaround coincided with an uptick in the team’s performance and hopes were high for everyone entering 2022.

With more aggressive expectations, Candelario’s plate approach got more aggressive, too. He has struggled through the 2022 season, currently slogging his way to a .207 batting average and a paltry 77 wRC+. He has made weaker contact than he ever has before, and it can likely be attributed to a huge jump in his swing rates. In his most productive years of 2020 and 2021, he swung at 46.8% of the pitches he saw (65.3% in the zone, and 29.2% out of the zone). This year, those numbers have ballooned to 52.5% overall, 71.4% in the zone and 35.4% out of the zone. By swinging at worse pitches, he is unable to make hard contact (not to mention his walk rate has fallen to a career worst 5.8% when it’s never been below 9.2% in the majors).

After returning from a shoulder injury in late June, he had his best month in July, which not surprisingly coincided with his lowest swing rates on fastballs and breaking pitches. His month-by-month averages of .159, .210, .194, .267, and .174 fluctuate with in the inverse pattern of the graph below, and shows exactly how his swing rates affect his performance. 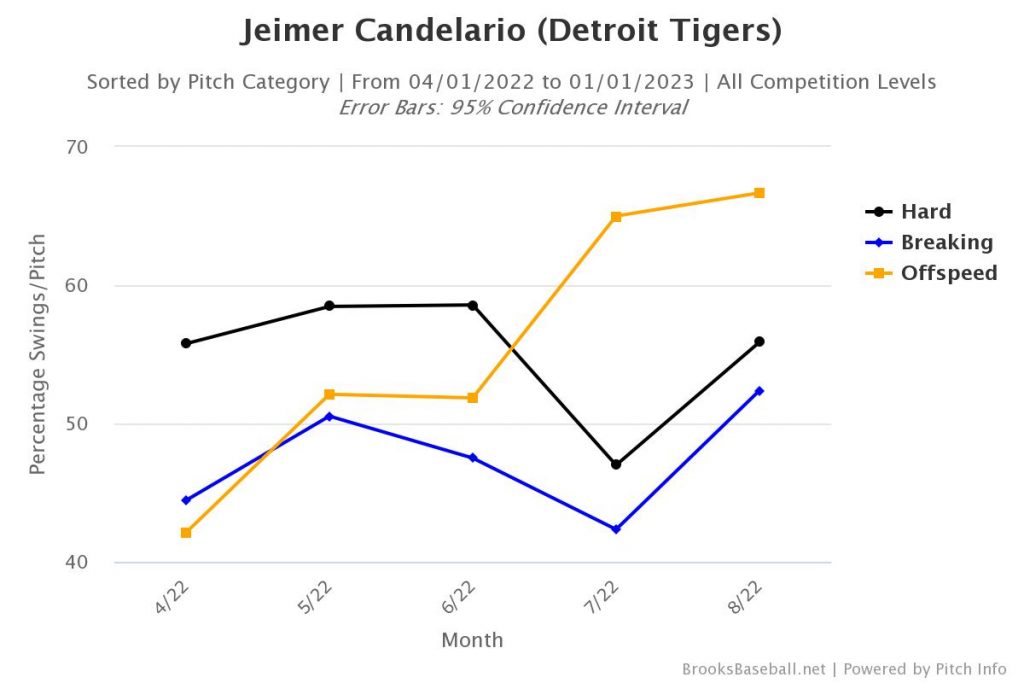 It would seem that recovering a plate approach that he used effectively just one year ago should be an easy fix, right? But then why hasn’t it happened in 2022? If Candelario can harness his previously good eye and swing decision making, he still possesses the tools to be a viable (although unspectacular) contributor. As long as he continues to swing at everything, though, he’s best left riding the pine.

There can be only one

I have never had an easier time deciding who to write about for a TDG Triple Play than this one. I didn’t expect that to be the case when I signed up for Detroit pitcher in the preseason, as they had a very promising young staff. But former top overall pick Casey Mize had Tommy John surgery, fellow first rounder Matt Manning only recently returned from shoulder issues, and free-agent signing Eduardo Rodriguez struggled before getting hurt and then going AWOL. The Tigers have relied on a revolving door of starting pitchers, and most of them you don’t need to know unless you’re in a 30-team dynasty league.

Tarik Skubal has been the only real bright spot, with a 3.52 ERA and 1.16 WHIP in 117.2 innings so far this season. Even he hasn’t been totally immune to the Tigers’ health woes – he just went on the injured list with arm trouble, though it isn’t expected to keep him out long.

He has lost a few strikeouts in the process. His 24.5% K-rate is the lowest of his career, perhaps a disappointment to dynasty managers who picked him up because of his gaudy minor league strikeout numbers. I’m not too worried though. It’s a small price to pay for improvement in almost every other aspect of pitching, and he’s making up the difference by going deeper into games.

Change for the better

Skubal has also significantly increased the movement on his changeup, which now has an impressive 25.8% swinging strike rate. He only throws it 14.9% of the time, and almost never to lefties, but perhaps making it a bigger part of his arsenal could unlock his strikeout potential. He’s also managed a respectable seven wins while being backed by the worst offense in the league. As troubling as this year has been for the Tigers, they should be able to improve at least a little on their 3.22 runs per game in the future.

Like most young pitchers, there’s still plenty that could go wrong for Skubal. His current injury could be worse than it seems, or the home runs could resurface. But overall I’d say he’s trending up from the No. 53 ranking we gave him in the off-season, and is now comfortably a top-40 dynasty arm. You can feel pretty good about slotting him into the middle of your fantasy rotation, and he’s young and talented enough to take another step forward in the future.

A Tiger in the Bushes

First off, I’m a Tigers fan so during the international signing period I always start by checking out whom the Tigers are shooting for and then I begin my prospect hunt with the Tigers minors to see if anyone is blossoming in the lower rungs. For years I have been sorely disappointed. For a solid five years there just wasn’t much to be excited about. Riley Greene and Spencer Torkelson, obviously, but they have since graduated. Which brings to mind the gentleman that I want to chat about. Back in 2019 the Tigers signed a 16-year-old out of Cuba for $2.85 million, more than they have ever spent on a Latin American teen. I was intrigued so I started to try and figure who this young buck was. As a 16-year-old he stood 6’1 and was pushing 200 pounds and showcased some of the best power a 16-year-old could have. The Tigers certainly kept a veil over the early parts of this kid’s progression as he was nowhere to be found during the 2019 and 2020 (not hard to believe) seasons as they kept him at their training facility.

In 2021 Campos finally debuted in the FCL, homering in his first at-bat, with a slash line of .228/.316/.441 and eight home runs in 136 at bats. Solid for a kid that really hasn’t seen meaningful baseball in three years (probably longer, to be fair, as he defected at 13). 2022 has seen Campos improve in every way, his slash line now sits at .248/.317/.382 and has lowered his strikeout percentage from 30% now down to 25%. The big power hasn’t shown up very much this year as he only has five homers in 322 at bats but has added 20 doubles and four triples. Right now, he is still playing center field but with his frame look for him to settle into right. As it stands according to MLB.com Campos is their 8th best prospect but is beginning to show signs of why they invested so heavily into him. I’m excited to see how he can start to build upon his young career.

Athleticism for days, power to make Miggy jealous (easy now), and a young cub finding his way through professional baseball have my prospect radar going berserk. I think the mystery behind Campos is what drew me in, but the improvement is what is going to get me to stay. International signings are always a boom or bust especially when we are dealing with teenage prospects but that is where the fun begins. We are here to find that diamond in the rough and snatch them up before they become that next big thing. We are very early in the process with Mr. Roberto Campos, but I am starting to love what I see. Sometimes you have to look through the slash lines and fall in love a bit but do not be afraid to run the other direction when things turn sour. In this instance take a sip of water and swish your mouth out because this is going to be a heck of a flavor.