Unless you are rostering one of the top few closers, your relief pitching targets shouldn’t be considered long-term investments. There is too much volatility at the position to care about what you *think* they will be in 3 years, and being an age-ist will be a detriment to your success is accruing saves. Let others chase that shiny new toy, while you take the same strategy that most major league teams employ: install the crusty old vet in your closer spot, and call it a day.

Treinen was drafted in the 7th round of the 2011 draft by the Oakland Athletics after a solid senior year at South Dakota State University. There is a limited track record of college seniors transitioning into successful major leaguers. The draft is so deep that most athletes who show any promise get selected and signed out of high school or as draft eligible sophomores or juniors. Treinen was selected after his junior year, but didn’t sign with the Marlins at that 23rd round value. With the A’s, he got about 30 innings, and then in the following year at High-A, he underwhelmed across 100 innings split between starting and the bullpen. Oakland then traded him to Washington as part of a 3 team deal that netted them John Jaso.

He performed better after switching organizations, jumping from Double-A to Triple-A and then getting a shot in the majors by 2014. He started a handful of games, but also worked in relief. In the big league that year, he had 16 strikeouts in 36.2 innings as a starter, and 14 strikeouts in 14.2 innings as a reliever. Having never shown the ability to strike out batters at a league average rate as a starter, it was clear that his future lay in the bullpen. To start 2015, the Nationals kept Treinen in Triple-A to get fully acclimated to his new role, but he got a quick callup to be the setup man for Drew Storen. He held that same role when the club brought in Jonathon Papelbon in 2016, and continued his excellent work. He was given a shot at the closer role in 2017, but was the victim of some bad luck (5.73 ERA vs. 3.77 FIP with Washington that year), and was dealt back to Oakland as part of a package for Sean Doolittle. After the trade, Treinen had 42 strikeouts in 38 innings with a 2.13 ERA, while Doolittle had 31 strikeouts in 30 innings and a 2.40 ERA.

In 2018, Treinen completed that leap forward to elite reliever. He saved 38 games with 100 strikeouts in 80.1 innings, and an unfathomably low 0.78 ERA. Inarguably one of the top 2 closers entering 2019, he had a horrific season. He battled elbow, shoulder and back injuries, and posted career-worst numbers across the board. He struggled with finding the zone, and his stuff played down. He was hit harder than ever, most strongly evidenced by the barrel rate he allowed on his 4 seam fastball. 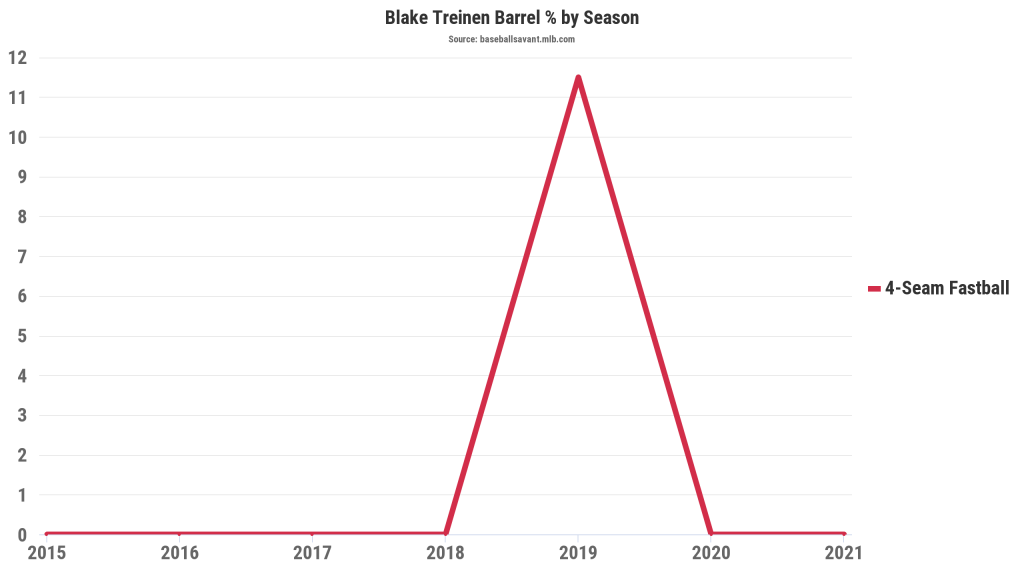 Thankfully, the Dodgers took a shot on him entering 2020, and he rewarded them by returning to his excellent former self. He posted good numbers in 25.2 during the shortened year, but ramped things up across 72.1 innings in 2021. Treinen was one of the most valuable relievers in baseball last year; both in real life and in fantasy. He had just a 1.99 ERA and a strikeout rate just under 30%. With Kenley Jansen still sitting on the free agent market, Treinen is in line to put up a season on par with his elite 2018 line. Even if something changes with the closer position in Los Angeles, he will be a valuable piece to a fantasy pitching staff, and should be a top target of any team looking for a 9th inning guy next offseason. When PitchingNinja makes a 2+ minute compilation of how nasty your stuff is, you’re doing something right.

133 Seconds of "How does anyone ever get a hit?" pic.twitter.com/1LQS5YqcfT

Ian Kennedy is old, unsigned, and honestly, not that good of a pitcher. But who cares? In fantasy baseball, we are told to draft talent, not roles. That adage falls apart when it comes to saves, though. Most teams, even the most analytically inclined, prefer to have one person in the closer role, regardless of what the numbers and matchups say. Pitchers, believe it or not, are human, and likely respond better to structure than having no idea what to expect at the end of all 162 games. When installing a fixture at the backend of a bullpen, managers typically appeal to experience, and Kennedy has that in spades.

Since the start of 2019, Kennedy is 11th in the league in saves. Just last year, he led the Rangers in saves AND was second on the Phillies in that stat. Multiple teams wanted him for that role then, and that will be the same this year. Once free agency opens up again, he could be sought after by a competing team without a set closer (San Diego?), an up and coming team that wants to keep their young pitchers in high leverage spots (Detroit?), or a rebuilding club that could flip him at the trade deadline (Kansas City reunion?). It seems counter-intuitive, but because he isn’t the best relief arm available, any team that signs him will almost assuredly be doing so for him to take over the 9th inning. Because of that, he could easily be this year’s Marc Melancon and battle for the league lead in saves.