Torres swatted 38 home runs in 604 PA in 2019, then hit just three in the pandemic-shortened 2020 season. It was easy to write that off based on small sample size, but when he followed that up with only nine last year, panic set in and he tumbled all the way to 23rd in our shortstop rankings.

That seems harsh. Torres really hasn’t changed as much as you might think. If you look at his xwOBA on Baseball Savant, he’s hardly changed at all. He posted identical .337 marks in 2018 and 2019, followed by .332 and .330 the past two campaigns. His plate discipline has actually improved, and the skills are all still there for a rebound.

Torres might not hit 38 HR again. That was a bit fluky, but so was his recent power outage. The truth is somewhere in the middle. Steamer projects a 2022 line of .269/.346/.445 with 23 HR, 81 R, 85 RBI and 14 SB. I’m confident in all those numbers except the steals, which came out of nowhere last season. He isn’t particularly fleet of foot, so who knows how long he’ll keep running, but it can only help his fantasy value.

Torres just turned 25 in December and even with his recent struggles, he’s got a very impressive MLB resume for his age. It’s too soon to give up on him.

Preciado has a similar scouting report to Mets prospect Ronny Mauricio. He’s a lanky 6-foot-4 switch-hitting shortstop prospect with potential to grow into big power as he matures physically. I was always intrigued by Mauricio, but I’m a numbers guy and he’s been underwhelming statistically.

Preciado, on the other hand, is off to a great start on the stat sheet, slashing .333/.383/.511 in his professional debut in the Arizona Complex League last season. He won’t even turn 19 until May, so there’s plenty of time for growth. He’s still relatively under the radar and perhaps unrostered in shallower dynasty leagues, but if he continues to hit in full-season ball, that won’t be the case for long.

Gimenez was a pleasant surprise for the Mets in his 2020 MLB debut, stealing eight bases in just 132 PA. That speed made him a popular sleeper last season after joining Cleveland in the Francisco Lindor trade, but he struggled badly to start 2021 and was demoted to Triple-A in May.

Gimenez fell off many fantasy radars, but he made some noteworthy progress in the minors. He slashed .287/.342/.502 with 10 HR in 233 PA, at one point homering in six straight games. He hadn’t shown much power before, but his 110.2 max exit velocity tells us it’s in there if he can continue to lift the ball.

Gimenez is 23, his sprint speed is in the 93rd percentile per Statcast, and he’s 19-for-20 on steal attempts at the MLB level. Throw in the developing power and you’ve got an intriguing profile for the 42nd-ranked shortstop. Acquire him now while he’s still under the radar, and soon you might be getting 15-20 HR and 25-30 SB from your MI spot. 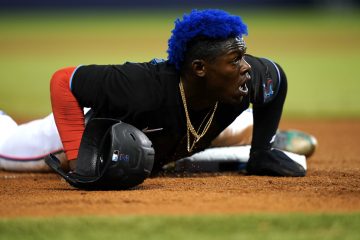