In 2019 the Cincinnati Reds used their second round selection on Hinds (#49 overall) as a high school prep bat out of the well known IMG Academy; signing him for over-slot value to forgo his commitment to Louisiana State University. At 6’4″ and 215 lbs, Hinds stands out for his tremendous power potential and was amongst consideration for one of the best power hitters in the 2019 draft. However, as with many power hitters there are considerable questions about contact and strikeout risk that follow.

Spending time at the Reds’ alternate training site in 2020 Hinds immediately made an impression using that plus-plus raw power to post some very exciting exit velocities, hitting as high as 117 mph in his short tenure. What was most encouraging was that he took steps forward as a development as a hitter, laying off more breaking pitches and making more consistent contact. Moving forward to the 2021 season Hinds started off in Low-A Daytona and then missed two months in the middle of the season with a knee injury; though when he returned he was locked in posting five consecutive two-hit games along with four home runs. His line through 43 games at Low-A was .251/.319/.515 with 10 home runs and 27 runs batted in. We’ll flex some more extra base power here by adding 10 doubles and 2 triples.

Hinds’ approach is that he’s not just looking to be a pull happy slugger either as scouting reports say he’ll put the ball out to right or center field just as easily if you let him; the corresponding batted ball splits for pull, center, and opposite back that up (43.6% / 25.6% / 30.8%). Walk and strikeout rates (7% / 28.1%) will still need some work, as expected.

Digging into some of the other tools for Hinds we’ll see that he’s average for a fielder at third base and runner in general as well. A plus-plus arm does give him the opportunity to make tough throws when he does get to the ball. A move to right field is very much a possibility as he continues to move along with his development in the Reds’ system; the arm could be useful in keeping base runners honest if they do decide to go that route.

Looking ahead to what his major league projection could be, Hinds has the upside as a 30+ home run power hitter and run producer in the heart of a lineup. Keys to his development include improving pitch recognition and adjustability in his swing to create sound contact driving the ball. So far he’s shown the ability to understand this and leaves me optimistic he’ll continue this trend; particularly for the all fields power knowing that he’ll be able to do damage on the outer half of the plate should pitchers make a mistake. I very much look forward to Hinds’ continued development and the potential for some exciting exit velocities to go with it! 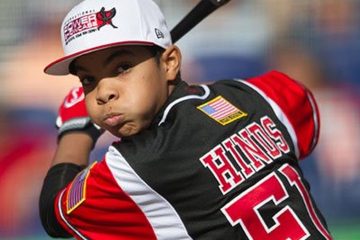