It’s a wonderful time of year. And in no way am I talking about Christmas.

Well, I mean yes Christmas time is great and wonderful. I love all the movies, especially Die Hard, and the decorations and the cookies. BUT what I am referencing is this is about the time in the NBA season when teams finally start to embrace tanking. I love a Cinderella story as much as the next guy, but let’s be honest Houston Rockets, you need to focus on the future. So why the hell are you still giving Daniel Theis so many minutes over Alperen Sengun when he can pass like this?

Bottom line: teams are going to start making moves to evaluate some young guys. Whether that is dealing away pieces who might have a bigger role elsewhere, or opening up starting spots, there are a few young guys who could see their production jump. And now is the time to scoop them off the waiver wire because if they do get the bump I expect, they’ll become priority pickups.

When it comes to Bagley, the internet has a WIDE range of opinions. Yes, he was picked ahead of Luka Doncic but that’s not really his fault. Dude absolutely balled out in college, putting up 21 and 11 a night and was 1st team All-American as a freshman. That’s the pedigree teams dreams of drafting! Now, would I have taken him ahead of Luka? No, but he was still brimming with potential when he entered the league.

And once he got to the league, he put up real solid numbers. 14 ppg and 5 rpg can help anyone’s fantasy team and that’s what he’s given you…when he’s actually played. And there is the downside, this guy has not been able to stay on the court. In his first three seasons he played 61, 13, and 43 games respectively. Did I also mention his agent publicly started a feud with the Kings?

So why with all this negative baggage am I suggesting him as a waiver wire add? Firstly, and you may have already heard this, but the Kings fired Luke Walton. It seems Walton may have been the problem, but regardless it’s got Bagley back in the lineup. Bagley rarely played for Walton, but has scored in double figured in 6 out of 8 of his games since the head coaching change. Now here’s the key – he’s missed a lot of game, and like most of the NBA is in health and safety protocols, but once he gets his conditioning up he could be in line to see a massive jump in production. And whether the Kings want to keep or move Bagley, they’re going to need to give him opportunities to showcase his stuff. Now is the perfect time to grab an asset off the waiver wire, or buy low in a trade, who a few years ago was seen as a dynasty building block.

Oh and did I mention the Kings are now shopping Bagley in a trade? Getting out of Sacramento can only boost his value even more!

So the Pacers have finally (maybe?) embraced the rebuild. They reportedly are shopping Domantas Sabonis, Myles Turner and Caris Levert. It’s always puzzled me that Indiana kept drafting big men when they had those spots locked down, but if they finally move one, or both, of those guys there are two very intriguing options who should fill that roll just sitting on the waiver wire: Isaiah Jackson and Goga Bitadze.

Let’s start with Jackson. Now, I know you don’t know me very well but I’m pretty good at this dynasty basketball thing. And one of the rules I’ve lived by that has helped me get here is bet on John Calipari’s Kentucky guys. They have a history of being better NBA players than college players, which means you can get in early on these guys often before they blow up. Just look at what’s happened with Devin Booker, Tyler Herro or Immanuel Quickley.

Now let’s look at Jackson. He’s 6-foot-10 with a 7-foot-3 wingspan, high defensive IQ, excellent bounce and an elite motor. Basically he’s a prototypical rim-running big who’ll dunk lobs, rebound and swat shots. If you’re looking for the next Jarrett Allen, Jackson is the guy to scoop from the waiver wire. And like I said, Calipari’s guys always showcase something you wouldn’t expect in the NBA so don’t be surprised if there’s a bit more upside than you expected.

Goga Bitadze is more of an enigma. Most people may know him from an infamous NBA Draft media day photo where he was sat next to Zion, but he was a very accomplished player in Europe beforehand. He didn’t torch European Leagues the way Luka Doncic did, but as a teenager he put up numbers that resemble another Euro star: Nikola Jokic. He has the ability to score, can stretch to the 3-point line and defends the rim at a high level. A guy with that pedigree is available for almost nothing! He’s rostered in only 1% of Yahoo leagues, so the cost of grabbing Goga is next to nothing.

Having said all that, the Pacers have only played him more than 10 minutes a game once in his three seasons but I would chalk that up to Indiana’s loaded front court. And while he *can* hit from behind the arc, his career high 25%.

With both of these guys I think there’s way more opportunity for them if Myles Turner is the one who gets dealt, as they both have high defensive upside. But hey, if the Pacers want to ship Sabonis out too I’m happy to load up on Isaiah Jackson and Goga Bitadze stock. 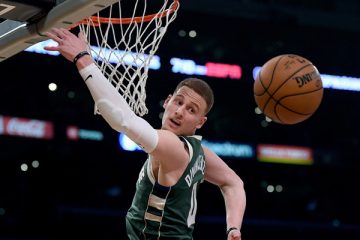 WTF Do We Do With: Donte DiVincenzo