Welcome to a continuation of our new Prospect Spotlight series, where we pair our prospect rankings with a deep dive on one of the players in that ranking. Here, we’ll dive deeper into the prospect’s fantasy profile, highlighting their background, skill set, and what we see for them coming down the pipeline. Prospects are the lifeblood of any dynasty league and we hope to bring you more great info on these rising stars in 2021 than ever before.

Lowe is a former first-round pick, 13th overall in the 2016 amateur draft, out of Pope High School. He stands 6’4” and weighs 205 lbs at twenty-three years of age (born February 2, 1988). He’s very athletic with long arms and legs and has put on about 15 lbs since being drafted. His brother Nate was traded to the Rangers this offseason, but he’s not related to Rays’ second baseman Brandon Lowe.

He’s quite active in the box before the pitch is thrown, with a small bat waggle, and swaying his weight back and forth. Generally, Lowe’s swing is effortless and smooth, but in part due to his long arms, he’s susceptible to inside fastballs. With strong hands and average to above-average bat speed, Lowe does use the entire field. He’s done a good job putting more balls in the air, dropping his ground ball rate to just over 35% in 2019, something he’ll have to continue to work on. Even if he does, the hit tool would grade as average, or 45 to 50 on the scouting scale.

Plate discipline is something Lowe has worked on and consistently improved through the minors. The first two years in the system, Lowe had a strikeout rate over 27%, but he’s lowered that to just over 25% each of the last two seasons. While he’s always been patient, and willing to take walks he’s produced walk rates over 10% each of the last two years. It will be important to be patient and target pitches he can handle, to unlock as much power as possible.

Josh has plus raw power, but he doesn’t untap all of it in games, thanks to his average hit tool. It’s not to suggest he doesn’t hit for power, but that he could hit for more if he were able to square up more balls. 2019 was his best power season to date, with a .190 ISO in Double-A, resulting in 18 homers on the year. It was the first time he’d ever reached double-digit homers, so there’s hope he’s started to unlock some of that power, maybe thanks to his improved approach and improving contact skills. If his adjustments stick, look for upwards of 20 home runs a year.

This is where Lowe’s fantasy profile gets exciting, as he’s a well-above-average runner, and he’s active on the basepaths. After stealing 40 total bases across the 2017 and 2018 seasons, Lowe broke out and stole 30 in only 121 games in 2019. Once he gets his long legs moving, he’s able to take an extra-base as well. Look for 20-25 steals a year if given regular playing time and a green light to run.

Josh is a very good defender who covers a lot of ground in center field. He has a strong arm that also profiles well in right field, though his glove is only average. Lowe was drafted as a third baseman, but he hasn’t played there since 2016, his first year in pro ball, and you shouldn’t expect him to get major league reps there. His outfield defense is plus, so expect the Rays to want him to be on the field late in games.

Josh Lowe is on many top 100 prospect lists, thanks to his plus raw power and his plus speed. Last year’s alternate site reports were favorable, and after his breakout 2019, he also faired well in the Arizona Fall League slashing .327/.379/.558. There seems to be some concern Lowe would be platooned, but in 2019 he took a big step forward against lefties, slashing .264/.338/.473 with six home runs in 148 plate appearances. Now 23 years old, Lowe might be the first call if the Rays need an extra outfielder at some point in 2021. 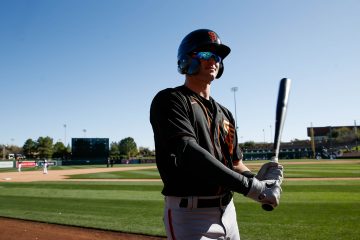