This is a companion piece to our Outfield rankings. The opinions below are my own and do not reflect the TDG consensus.

Outfield is easily my most favorite fantasy position (shortstop is sexy and first base is powerful, but give me all the variety of the outfielders any day) and thus it is really hard to go wrong with any of our top ten as your number one outfielder for the 2021 season and beyond. So after that studly group, here are two MLB vets and one prospect to target in annual and Dynasty leagues…and beyond!

There was a slight scare in his Dynasty managers when Michael Brantley almost signed with the Blue Jays, but he did not, so Gurriel’s left-field job appears to be safe. Possessing some of the coolest hair in the majors, Gurriel signed an eight-year deal for $25 million back in 2016, nine months after he defected from Cuba. It only took him two seasons to progress through Toronto’s system, reaching the majors in July 2018. After spending the early part of 2019 at Triple-A, Gurriel joined the big-league squad for good and was the three-hole hitter for the rest of the season. 2020 saw him really succeed, with 11 home runs, 61 Runs + RBI, three steals, a strikeout rate of 21.4%, and a slash line of .308/.348/.534, which was valuable in all league types. While a high .351 BABIP contributed to the better average, Gurriel should have a floor of .270 along with 25+ home runs and good counting stats hitting sixth in a stacked Blue Jays lineup.

Injuries do rear their unwanted head with Gurriel, and in 2019 a quad strain kept him out about a month in mid-August to early-September. He does have other IL stints for a wrist injury (2017), appendectomy (2017), left ankle sprain (2018), and head (he was kicked while he slid) (2018). The head injury and appendectomy are less than relevant for an injury-prone assessment, and while we should not discount the others, none appear to be recurring and at age-27 we will hope youth and health are on his side (as could be said about many major leaguers). Underlying stats support his breakout, with a Hard Hit % at 84% in 2019 and 91% in 2020. With an ADP (as of this writing) of 83 on NFBC as the 22nd outfielder off-the-board, I am targeting Gurriel in all formats as a #2 outfielder for this season and the next few, with the possibility for low-end #1 status if everything clicks.

Figuring Soler for 162 games again may be silly, but he can do a lot of damage in 130 games, maintaining a floor slash line of .250/.350/.500 with 30+ home runs. Depending on league setup Soler may only qualify at designated hitter and not outfield, as he played eight games in rightfield in 2020, though over a full season he will play more than ten outfield games. Currently the 40th outfielder off the board in NFBC leagues (as of this writing) with an ADP of 145, Soler can easily be drafted as a number three or four outfielder or utility starter while providing the value of a number two.

Soler’s probable future teammate in Kansas City, Lee was a third-round selection by the Royals back in 2016, working his way up to Double-A in 2019 where he stole an eye-popping 53 bases along with eight home runs, 125 Runs + RBI and a slash line of .264/.363/.372. Many do not believe Lee is capable of that many steals at the big-league level, but he does have other minors seasons of 20 and 16, respectively. While Lee may not steal 50 at the major league level, 20 is not unreasonable on a Royals team that likes to run.

In 2019, Lee also had an 11.9% walk rate (good) compared to a 28.2% strikeout rate (bad). He also has a Raw Power potential of 60 and in-game power of 45, and while we have not seen a lot of home runs thus far, he did hit 17 home runs at Single-A in 2017. The left-handed Lee has good power and speed on the basepaths while waiting for his hit tool to catch up. Kansas City has been aggressive with their prospects so it is quite possible we see Lee in the majors at some point in 2021. The Royals invited him to Spring Training back in March and added him to their 40-man Roster in November, so they believe in Lee. With a ranking outside most top 100 lists (though often within the top 150 or so), Lee represents a minor investment that could pay off in a major way. 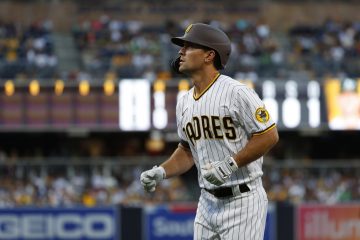