Welcome to a continuation of our new Prospect Spotlight series, where we pair our prospect rankings with a deep dive on one of the players in that ranking. Here, we’ll dive deeper into the prospect’s fantasy profile, highlighting their background, skill set, and what we see for them coming down the pipeline. Prospects are the lifeblood of any dynasty league and we hope to bring you more great info on these rising stars in 2021 than ever before. It is third base week here at TDG and for all of you deep dynasty players out there; keep your eyes on Drew Mendoza.

Mendoza (aka Mendo Moonbombs) was a power-hitting third baseman during his three years at Florida State. In fact, he smashed 13 homeruns in 46 games in the spring of 2019 and the Washington Nationals selected him in the third round of the 2019 draft. After being drafted, he played in 55 games in Low-A where he smashed another four home runs and slashed .264/.377/.383 with a 128 wRC+. He missed a bunch of development time this summer but made it to the Alternate Site in September and also played during Fall Instructs.

Mendoza has above-average raw power and has shown the ability to get to it easily in games. However, there are questions about his ability to make contact. While he has a patient approach and a good eye for the strike zone, his swing is long, and has trouble making contact in the strike zone. He would definitely be better suited for an OBP league versus an AVG league. Mendoza is 6’5″ so it is no surprise to see someone have holes in his game. There were reports that he was working on shortening up his swing during Fall Instructs and couches were impressed with how quickly he made the adjustments. While he played third base in college, he began playing first base this summer and took to the position very quickly.

He should begin the season in High-A and should move quickly through the system, due to his age (23) and the awful state of the Nationals farm system. We will also have the chance to see the shorter swing in action and have a better idea of what type of player Drew Mendoza is. 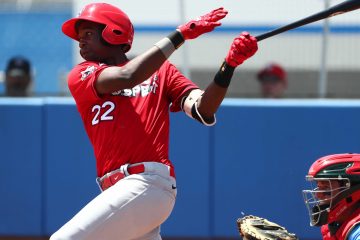