NBA basketball is back after the brief offseason, with that in mind, it was important to get an update out reflecting my most recent changes to my general dynasty rankings after offseason film review and the aid of a couple preseason matches. Use this as a resource for last minute start up drafts or a tool of how to steer possible trade negotiations in the future. Feel free to ask questions in the comments section, or hit me up on Twitter with any comments (@iLoveShawn5000).

The elite among primary ball handlers are still led by the leaders of the older generation. Stephen Curry, James Harden, Damian Lillard, Russell Westbrook, all have numerous elite seasons under their resume but are currently 30+ and eventually approaching post prime form heading into the 2021 campaign. Dynasty leagues always shade young meaning the further any of these players drop the likelier possibility of returning short term value during start up drafts. Analyzing future value of the point guard crop leaves me with one major takeaway: If you miss the all star level guards during the first few rounds of drafts the road to acquiring one of these talents may be the largest in terms of opportunity cost.

Early drafts during this current cycle have also highlighted the scarcity of dependable shot creators who provide your roster with stability in the assists category.  In redraft leagues you can survive taking fliers on the older point guards with injury concerns and live to tell the story(John Wall, Kyle Lowry, Chris Paul, Mike Conley) however once the top elite young offensive engines are off the board it gets uglier than you would project.

FVV’s journey from undrafted free agent out of Wichita State to crucial cog on a NBA title team is without a doubt one of the best stories spawned over the past few seasons. One of shining products that illuminates why the Raptors player development staff have emerged as one of the best in the business. VanVleet has proven to have a steady and stabilizing nature on the teams offense, if there was a poster child for grit right now, the undersized guard from Illinois has to be one of the first to come to mind.

Success between the two-man chemistry between Kyle Lowry and VanVleet is a testament to each of their non stop work rate on the defensive end, neither of these guys are 6″1 without boots on yet continually find ways to produce winning basketball.  The recipient of a sparkling 4 year 85 million dollar contract during free agency, cements his place as a foundational block moving forward for the Raptors back court. VanVleet has been one of the most effective off ball players in the league due to emerging as a lethal shooter, according to CleaningTheGlass he hasn’t fell below the 85th percentile in overall three point efficiency, and last season he shot 43.9 percent on catch and shoot opportunities (90th percentile).

Due to his lack of size it’s unlikely he’ll ever be a strong finisher around the basket (18th percentile on 268 rim attempts last season), which means while building your teams you must be cognizant of stacking around too many other players who could tank your field goal percentage. Toronto’s developmental resume is another reason why Malachi Flynn should be someone you keep a keen eye on as someone who landed in perfect a situation to capitalize on his potential.

Higher than Consensus (outside top 10):

Higher than Consensus (outside top 10) 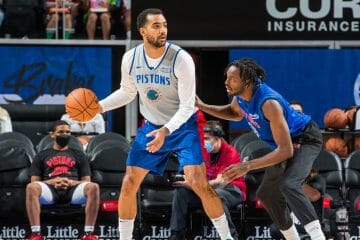